Why the cardioid shows up in the Mandelbrot set?

How does the main cardioid appear in the Mandelbrot set? I also wonder why something "weird" happens at a point with coordinate 2 on the actual coordinate line, I mean why is the point a sort of bounding point? (this question has already been raised, but I have not found a clear answer) 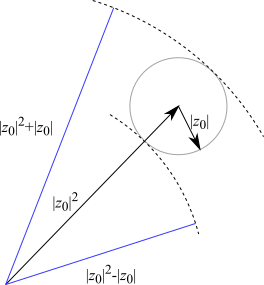 If $2\theta$ and $\theta$ point in less special directions, the length is between the two above, so is still a number bigger than $|z_0|$.

What we have shown is that if your starting point has $|z_0| > 2$, then $|z_1| > |z_0| > 2$. We can continue the analysis and discover $|z_2| > |z_1|$, then $|z_3| > |z_2|$. This tells us we have an increasing sequence of radii. It is not quite enough to show that the sequence of radii diverge. For that we have to show that the amounts of increase don't eventually decrease to zero. (If the radii have to increase by increasing amounts, the radii will ultimately diverge to infinity.) So let's look at that iteration more carefully.

Watch this video regarding the carioid question: