Formal and intuitive meaning of the simple connectedness

A topological space is called simply connected if it is path-connected and every path between two points can be continuously transformed into any other such path while preserving the two endpoints in question.

I understand both formal and intuitive meaning of the simple connectedness, but I can't get the idea how they imply each other. For example, given the following 2D-picture of a space that is connected but not simply connected. I've tried to draw two paths that contradict to simple connectedness. I can't understand why we can't build a homeomorphism between them. 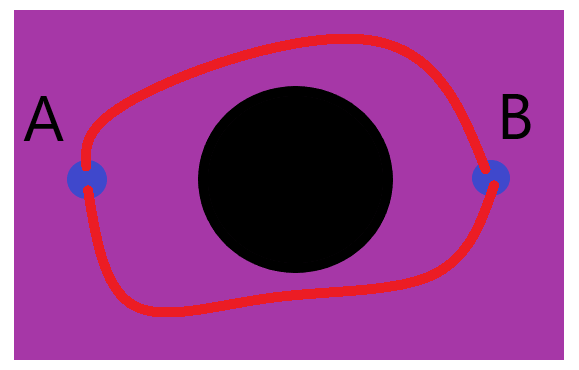 First off, you are looking for a homotopy - not a homeomorphism - between the two paths.

One may also interpret this as a family of paths parametrized by $t \in [0,1]$ s.t. the starting point and the endpoint are the same for any of those paths, which varies continuously w.r.t. the parameter $t \in [0,1]$.

So in particular, the images of any of those paths needs to be contained in $X$. If you wanted to draw such a family of curves in your picture, they would either have to be discontinuous, of transition through the hole in the space. Either of which is a contradiction.

Not the answer you're looking for? Browse other questions tagged general-topology geometric-topology or ask your own question.