Need explanation for probability calculation in this problem

I am trying out the first probability problem at this link. I found the notations given too complicated, so I follow my own. 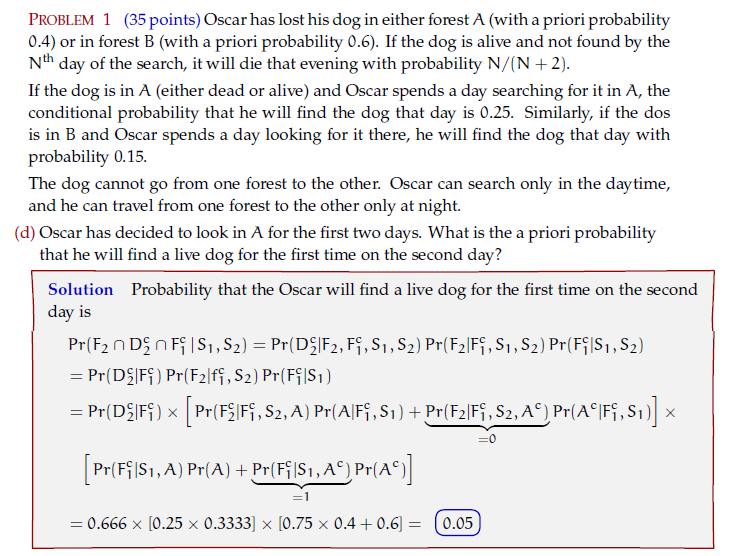 I am worried that my reasoning is different than theirs. Can someone point out if I am right, and explain to me their reasoning? Thank you.

Your numbers are good, and you seem to get them from the right conceptual place.

Only the nomenclature is a bit questionable. It might be OK to omit the $S_1$ and $S_2$ events from all your formulas when answering part (d) of the question, since if you define all your events under the assumption that Oscar always searches in forest $A,$ we can take $S_1$ and $S_2$ as always true and it seems unnecessary to insert them everywhere as the "book" solution does. That does mean, however, that if in parts (a), (b), and (c) Oscar did not decide to look in forest $A$ on both days, you have to make all new definitions of your events for part (d) in order to incorporate the new assumptions. I suspect that the "book" solution defined all its events without making those assumptions, hence why it has to make the conditioning on $S_1$ and $S_2$ explicit throughout part (d).

We need to write this as a conditional probability because the problem statement only said the dog dies on the first evening with probability $\frac13$ if it is not found on day 1.

This might help explain the author's motivation for the strange-sounding wording about finding the dog "for the first time" on day $2.$ Once the dog is found, presumably Oscar will remove it from the forest, and there won't be a second time to find the dog (unless it gets lost again, but I think we'd have to start a new sequence of events in that case). That is, I would interpret $F_1$ and $F_2$ as disjoint events, so that $F_2 = F_2 \cap F_1^c.$ But by writing $F_2 \cap F_1^c$ explicitly at the start, we're less likely to forget that whether Oscar finds the dog on day 1 has a significant effect on other things such as the dog's chance of surviving to day 2.

So already with the first equation, $$P(\text{find dog in A, day 2, alive})= P(\text{find in A, day 2})\,P(\text{alive, day 2}),$$ things are not quite right. One might ask whether you really mean that "find dog in A, day 2, alive" is the intersection of the events "find in A, day 2" and "alive, day 2", and how you concluded that those events are independent. (In point of fact, as stated they are not independent unless you think the dog is just as likely to die on the first evening at home with Oscar as it is in the forest.)

As I already said, you have good numbers, but I would derive them as shown below (if we define the events $F_n$ and $D_n$ under the assumption that Oscar looks in forest A on both days). The event where Oscar finds the dog alive in forest A on day 2 is $F_2 \cap D_2^c,$ and

The "book" solution, in my opinion, is unnecessarily convoluted, because (converted to our notation) it requires computing both $P(F_2\mid F_1^c)$ and $P(F_1^c)$, both of which require examining cases conditioned on both $A$ and $A^c$. I think our intermediate results are easier to compute.

Not the answer you're looking for? Browse other questions tagged probability conditional-probability bayes-theorem or ask your own question.