The following Python program implements Newton’s method for computing the square root of a number:

As we can see, this naive program does not perform well:

Both problems can be solved by redefining the good_enough procedure like this:

But discussing the various solutions is not the point of my post. Instead, I would like to reliably predict for a given $x$ if the above naive program will return.

I have not read the IEEE Standard for Floating-Point Arithmetic (IEEE 754), but to my understanding, floating-point numbers are not uniformly distributed on the real line. Their spacing is large for small numbers and small for large numbers (this Wikipedia figure seems to confirm this). In other words, small floating-point numbers are dense and large floating-point numbers are sparse. The consequence of this is that the naive program will enter an infinite recursion if guess has not reached the tolerance range yet and the improve procedure cannot improve the guess anymore (meaning that a fixed point of the improve procedure has been reached), because the new guess would be off the old guess by a distance below the spacing of the old guess.

So to guarantee that the naive program will return for a given $x$, it seems to me intuitively that this predicate must hold:

Note. — I am using the CPython interpreter on a 64-bit MacBook Pro so the IEEE 754 binary64 format.

A closer analysis is possible using Sterbenz lemma regarding the subtraction of floating-point numbers which are sufficiently close to each other. When $x^2$ is a good approximation of $\alpha$, there is no error in the subtraction when computing the residual. It follows that $$\hat{y} = x^2 (1 + \epsilon) - \alpha = y + x^{2} \epsilon \approx x^2 \epsilon.$$ The very best we can hope for is that $|\epsilon| \leq u$, and while it does happen that $\epsilon = 0$, we have no right to expect that $|\epsilon| \ll u$ and in general this is not the case and $|\hat{y}| \approx \alpha u$, something which we can easily verify.

* The unit roundoff $u$ is $u = 2^{-53}$ in IEEE double precision arithmetic, and $u = 2^{-24}$ in IEEE single precision arithhmetic. Machine epsilon $\text{eps}$ is the distance between $1$ and the next floating-point number $1 + 2u$, i.e. $\text{eps} = 2u$. Some authors will use the terms as if they are identical. They are not. When in doubt, follow the notation of Niclas J. Higham’s textbook Accuracy and Stability of Numerical Algorithms. The $\gamma$-factor which I used earlier is also explained in this textbook. Briefly, it is a convenient tool which allows us to simplify rounding error analysis considerably at the cost of a bit of exactness. It was not strictly necessary here, so I decided not to pursue it in these edit.

First off, it's not nice to your computer to torture it with such a bad initial guess. In python it seems you can provide a guess good enough to converge in $4$ iterations:

This interpreter produced the output

Of course it's more usual to perform iterations for $1/\sqrt x$; see for example tihs discussion on an initial estimate. Whoa, my computer is crashing so I will have to stop now.

With this background in IEEE-754, now consider what happens when the bits of the internal representation are shifted right by $1$: the exponent is sort of divided by $2$ but it's a little more complicated that that because it's a biased exponent. What happens to the mantissa is even more complicated than that. We propose to add another number to the internal representation before carrying out the right shift to handle the effect of the bias and also maybe to make the bits of the resulting mantissa a little better approximation to the square root. The approximation will be piecewise linear because changing the input by $2$ ulps changes the output by $1$ ulp but the relative scale of the changes will change when the input or output crosses a power of $2$. Thus we will analyze what happens at the kink points due to input being $1$, $2$, $4$, or $x_0$ where $f(x_0)=2^n$. 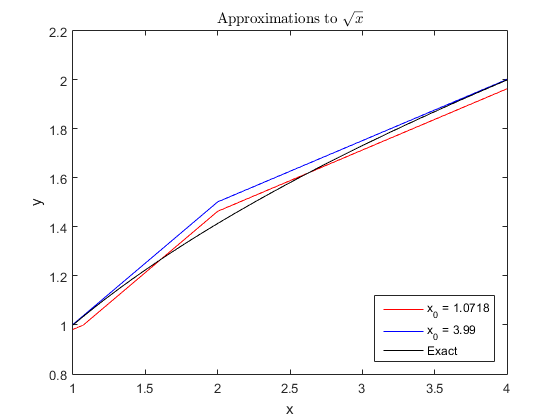 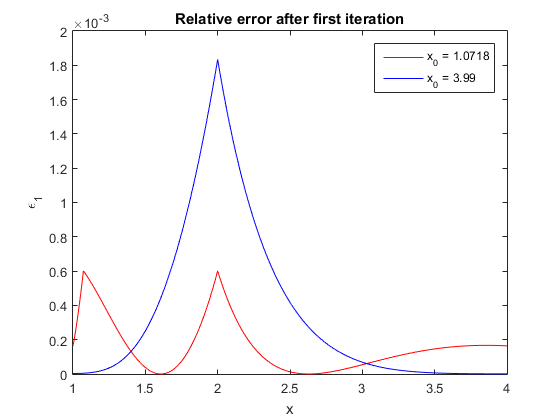 EDIT: To go back to paragraph $2$, for odd powers of $10$, $\sqrt x$ has no exact representation as a rational number of which IEEE-754 numbers are a subset. I have written a Fortran program that, for certain odd powers of $10$, write out the number $x$ and then its mantissa in hex. Then $y=\sqrt x$ is computed and its mantissa extracted and printed. Then the mantissa of $y$ is squared and printed, then rounded to its final form and printed in hex.

It's getting late now so not much time for the third paragraph. However there is a proof that $|x|=\sqrt{x^2}$ in IEEE-754 arithmetic provided $x^2$ isn't infinite or denormal.

EDIT: I tried a Fortran program that test some power of $10$ inputs:

BTW, I tried $10^9$ random inputs and in no case was the oscillation alluded to in paragraph $4$ observed. Maybe it's provable that it can't happen in the case of this algorithm, but in general it's considered risky to to check floating point numbers for equality. Normally one checks whether their difference is within some tolerance. Like you could have set $\text{tolerance}=1.0e-12$ and then compared $\lvert x-\text{guess}^2\rvert<x*\text{tolerance}$ and given quadratic convergence would have at most one more iteration to go when the condition was met and would have terminated easily because this is thousands of ulps away from an exact match.

Not the answer you're looking for? Browse other questions tagged numerical-methods approximation newton-raphson floating-point or ask your own question.

56
Show that floating point $\sqrt{x \cdot x} \geq x$ for all long $x$.
1
Can we get negative variance when calculating it for a small dataset using a naive formula?
2
Calculate the total number of floating-point numbers in a certain range
0
Methods for confirming that a polynomial root with errors is complex?
0
Global convergence of Newton's method for square roots
0
Newton's method for finding square roots