How do we know that the bounds chosen to apply the squeeze theorem are “tight” enough?

I have been examining many different examples and I found no objective justification to the chosen bounds in none of them, as if the choice was an intuitive process. Is it really just that? For the lower bound, do we "begin with" a 0 and start looking for a bound that is the furthest possible from 0 and that still satisfies the inequality? What about the upper bound? It just seems to me that it is very easy to choose the wrong bounds given the commonly counterintuitive nature of limits for beginners. Is there a way to be sure that it is the right/not right one and not fall onto that? (In case it makes a difference, the examples I have examined were applied on sequences)

Any help is welcome, thank you.

So just for context, here's the definition of the Squeeze Theorem my answer works with. There are more general versions of the theorem, which correspond to "convergence" in metric or topological spaces, but we'll just use a version for the real numbers to keep things simple.

The theorem can apply to functions $\mathbb{R}\to\mathbb{R}$, if you take $x \in X \subseteq \mathbb{R}$ to be a point on some interval of the real numbers, and $f$ to be a real-valued function.

An example with functions

In cases where $|a| < \infty$, this squeezing action can be visualized readily. Here is an example with $a = 0$: 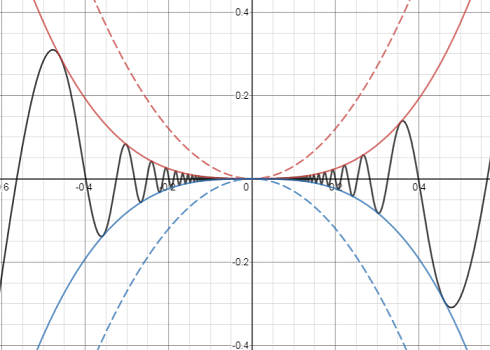 There is also an interactive graph you can use to explore this example further.

An example with sequences

Only the sequences in item $\text{(1)}$ bound the sequence $a_n$ "tightly". Nevertheless, any of these sequences would work to establish the limit of $a_n$ through the Squeeze Theorem, because they all bound $a_n$, and they all converge to $0$.

share|cite|improve this answer
answered Jan 26 at 3:04

share|cite|improve this answer
answered Jan 26 at 1:31

Not the answer you're looking for? Browse other questions tagged real-analysis sequences-and-series limits or ask your own question.