This Question was formulated somewhat improperly: See here for the correct question: Parametric Equations for A Logarithmic Sine-wave With Alternately Offset Points of Hyperbolic Tangency !!

Note. Please Read Everything Carefully and study the Graph Before Answering! (PLEASE, See second fig. [the close up one] also for more detailed info about the geometry; this is how I think the most self-evident solution will graph but don't feel too constrained by it.) I found the geometry for a sine wave that I've been trying to derive (and have posted about here before). (See my fig.) Everything appears pretty straightforward, however, I seem to lack the skill to derive it. My image should give you most of the information you need. But, here are a few points worth describing explicitly:

I'm going to re-orient things, and shift a phase, for reasons that I hope become clear.

(Note that the $P_k$ are not the local maxima and minima of the graph, since the tangent lines at those points are not horizontal.)

This certainly seems to give the desired plot: 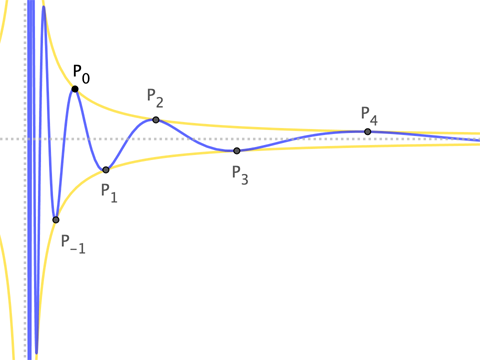 In comments below and in a revised question, OP updated the requirements so that (in my re-oriented context) the curve must pass through $(1,0)$; for greater generality, we'll make this $(\beta,0)$. Moreover, the revised question asks that the offsets between tangent points be scaled powers of $\phi$. These changes are not difficult to accommodate. Let's return to the above analysis at $(2)$, adjusting it to include $\alpha$:

I found something that seems to be heading in the right direction. However, does not really fit your curve nd doesn't uise PHI, but it might inspire you to think up the answer. i hope this helps:

Not the answer you're looking for? Browse other questions tagged calculus geometry algebra-precalculus wave-equation golden-ratio or ask your own question.