I am, generally speaking, having issues with proving combinatorics questions using bijective proofs, so any help explaining how to do that in general would be greatly appreciated. I understand why bijective proofs work, but I never know how to start a proof for it. Do I have to define a specific function and then show that it's one-to-one and onto, or is it enough to say that such a function exists? How can I show that it's bijective?

Now this is where I am unsure of how to continue, i.e. how to define a bijection between these two sets. Some ideas I had:

Any help/hints would be appreciated. Thanks!

Now in your problem, you find yourself in the case where both sides count the same thing, as the comment of JMoravitz indicates. The arithmetic interpretation in that comment is equivalent to your multiset interpretation: the $j^\text{th}$ term in the sum corresponds to the number of elements in the multiset of the $j^\text{th}$ type. The only issue that I can see that you're having is that you've only interpreted the right hand side for fixed $k$, when, in fact, $k$ is not fixed—it ranges from $0$ to $n$. Once you interpret $k$ as the number of elements of the multiset of type $1$, and the summand as the number of ways the rest of the multiset could look, you'll be well on your way to a solution. 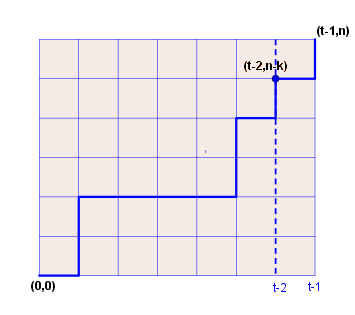 We can so partition all valid paths by taking paths crossing the line at a specific height $n-k$, followed by a horizontal step to $(t-1,n-k)$ and $k$ vertical steps to $(t-1,n)$.

It looks like we can define a bijection if we first totally order our set with $n + t - 1$ elements.

Not the answer you're looking for? Browse other questions tagged combinatorics combinatorial-proofs or ask your own question.