Can an eigenvector contain free variables?

If this is the free variable that you refer to, then yes.

There seems to be some confusion regarding the terminology.

Recall that, given a matrix $A$, an eigenvector is a non-zero vector $v$ such that $Av = \lambda v$ for some number $\lambda$, the corresponding eigenvalue.

However, given an eigenvalue, there are always infinitely many eigenvectors corresponding to that eigenvalue. Indeed, if $v$ is an eigenvector associated with the eigenvalue $\lambda$, then so is $t v$ for every non-zero value of $t$. This is easy to prove (and a proof is given in Wizact's answer).

In general, the set of all eigenvectors corresponding to a given eigenvalue, together with the zero vector, is called the eigenspace of that eigenvalue. This is a vector space itself. It might be one-dimensional, or it might be of any higher dimension.

For instance, consider the matrix 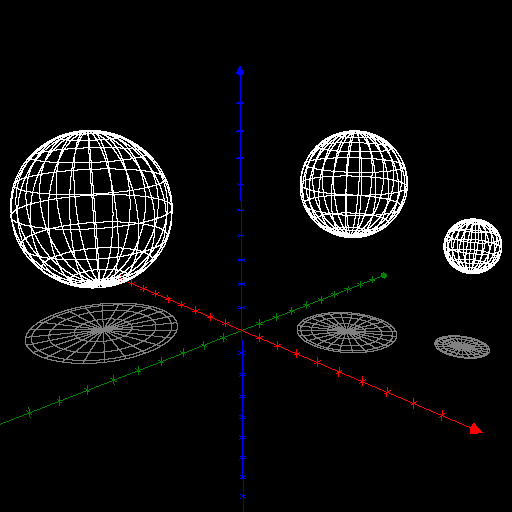 We therefore say that the $xy$ plane is the eigenspace corresponding to the eigenvalue $1$. This is clearly a two-dimensional vector space. A basis in this vector space is $\left\{(1, 0, 0), (0, 1, 0)\right\}$, so every vector in this eigenspace is a linear combination of these basis vectors. (More precisely, every vector in this space can be written as a linear combination of these basis vectors in a unique way.) Hence, every element in this space is of the form

for some coordinates $s$ and $t$. Every non-zero vector in this eigenspace is an eigenvector (for this eigenvalue).

for some coordinate $t$. Every non-zero vector in this eigenspace is an eigenvector (for this eigenvalue).

Hence, the expression for general vector in a given eigenspace -- typically, as a linear combination of the vectors in a basis for this eigenspace -- contains one or more variables, but each eigenvector is a pure numeric entity.

Yes. In fact, you always get (at least) one free variable when you are finding eigenvectors. This is because if $\lambda$ is an eigenvalue of $B$, then by definition $$|B - \lambda I| = 0,$$ so when you do row reduction on this matrix, you will always get at least one row of zeros. As Siong pointed out, that corresponds to the fact that if $v$ is an eigenvector corresponding to $\lambda$, then $t \cdot v$ is also an eigenvector corresponding to the same eigenvalue, for any $t \neq 0$. Indeed: $$ B (t \cdot v) = t \cdot Bv = t \cdot \lambda v = \lambda (t \cdot v).$$

Not the answer you're looking for? Browse other questions tagged linear-algebra matrices eigenvalues-eigenvectors or ask your own question.