Honest vs. Dishonest Voting: does it matter?

Let's say I have a website where people can rate movies on a scale of 0-10. We say people vote honestly when the rating they give to a movie is what they actually think. People vote dishonestly when they try to get the website's rating to be closer to their own rating: for example, if a movie's current average rating is 7.2, but I believe it deserves an 8, I will rate it a 10 to bump the average higher. (Everyone who votes dishonestly always gives a 0 or a 10.)

Hypothesis: It doesn't matter. Presumably the order of who votes when affects things (when everyone votes dishonestly), but when the number of voters $N$ gets large enough, it should converge.

When the mean is closer to one end of the scale, one side of the voting has more to gain than the other from being dishonest, so it's going to bias the voting.

Eventually, we're going to be alternating between the first and second ranges, and the vote will hover around $7$. 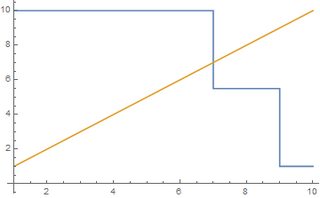 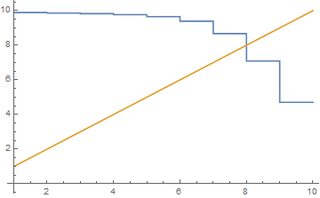 The first image is the example I gave above. The blue and orange curves intersect when $x=7$.

The second image is based on data taken from https://www.imdb.com/title/tt7286456/ratings. The blue and orange curves intersect when $x=8$. Note that the actual mean is $8.8$ and median is $9$, but under dishonest voting, the few voters that think that the rating should be $8$ or less have more of an impact.

Here's an example that dishonest voting can lead to a result that departs from the true average.

This example, of course, is rather artificial, especially in its assumption regarding the order in which votes are cast. But it suggests, to me at least, that dishonest voting is unlikely to come with any guarantee of arriving at the true average. It might be worth asking how close it comes, on some average (such as averaging over the different orderings of the voters), to the true average.

share|cite|improve this answer
answered Jan 4 at 15:25

Not the answer you're looking for? Browse other questions tagged voting-theory or ask your own question.

16
How low can the approval rating of a majority candidate be?
10
Gibbard–Satterthwaite Theorem versus Arrow Theorem
2
How do I weight votes based on number of possible voters?
2
Voting Systems without tactical voting
1
Describe all irreducible voting systems with two outcomes
0
A fair transparent voting system
0
Math of voting as single block
5
Fair Rank Voting When Some Members Do Not Vote