Showing homeomorphism between $X/{\sim}$ and the resulting quotient space 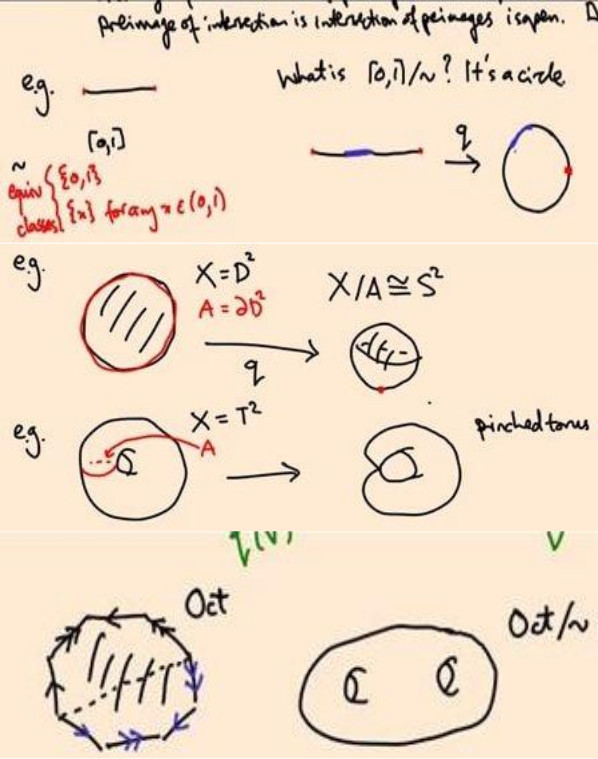 I have some questions in regards to how to show homeomorphism between a space $X$ with an equivalence relation $\sim$ defined on it, and its new quotient space $Y$

In the attached image taken from a playlist of lecture videos on Topology and Groups, 3.01 Quotient Topology shows four progressively complicated examples. The first one being the classic example of identifying two end points of a unit interval $I$ as equivalent, and any points within the unit interval gets map to itself. The resulting quotient space is a circle $S^1$. To show that this unit interval with the associated equivalence relation defined over it is indeed a circle requires one construct a homeomorphic mapping $q$ from $I/{\sim}$ to $S^1.$ The mapping usually given is a function in parametric form: $f(\theta)=(\cos(\theta), \sin(\theta)).$

The next example in the attached image is the example of collapsing the boundary $A=\partial D^2$ of a disk $D^2$ to a point, and hence the resulting quotient space is a sphere. To show that $X/A$ is homeomorphic to $S^2$, the homeomorphic mapping $q$ can be explicitly written out in parametric form.

I think the examples are only intended to give an intuitive illustration what the quotient spaces look like.

In the first two examples the spaces on the right side are easy to describe: They are the spheres $S^1$ and $S^2$, and it is not difficult to construct explicit homeomorphisms.

In the following two examples the spaces on the right side are not really properly defined. You certainly understand that they are suitable subsets of $\mathbb R^3$, but there is no precise definition. You can do that, but is would be very tedious to define them as concrete sets of points, and I believe it is not worth the effort. The difficulty is then to get a homeomorphism between an exactly defined quotient space and a "vaguely defined" object.

In the third example you may define the pinched torus as the quotient space on the left side, but then the object on the right side is not the pinched torus, and you still have to explictly describe it and to construct an explicit homeomorphism. Yes, it can be done, but see my above remarks.