I am about to teach applied mathematics for engineering. So I will teach how to use Laplace Transform to solve differential equations. Some of these differential equations involve the Dirac delta "function" as a forcing term, for example: $$y''(t)+y'(t)-y(t)=3\delta(t-1).$$ The students have as prerequisite: Calculus II and Calculus III. I don't know how to introduce the Dirac delta function:

1) Should I first talk about the distributions as linear functionals acting on test functions. Then define Dirac delta function as $\langle\,\delta,\varphi\rangle=\varphi(0)$.

I see at least two problems with the linear-functional approach:

I'm not a professor nor teacher, but an engineering student, which might be interesting for you if I tell you how my mates and I dealt with the Dirac delta function.

Our professor had taught us just saying that the Dirac delta function was not a function and had showed us the properties that you mentioned above. However, I found myself kind of curious about it and wanted to know more since at the same semestre I was learning distributions.

Nevertheless, most of us did not understand quite well the Dirac delta, despite knowing its Laplace Transform (LT), some of its properties and also that the Dirac delta was related to the LT of the Heaviside step function. We just learnt by heart, which, for me, is not good. Probably, because he did not teach like your first option.

From a college student that had to deal with such a thing, I think that your first option is better, because it would show me what it really is and its purpose, which, in my opinion, makes easier to use the Dirac delta function.

Here is my perspective as a second year graduate student and recent TA for an introductory differential equations course (in Fall 2019):

Spend one lecture or less going through the second approach. While you should talk about linear functionals, most students won't have the necessary background and will therefore be confused and potentially get angry at you. This isn't your fault - the only sort of math they have seen has been the computational mathematics taught to them in the first three calculus courses. Some engineers like learning a lot about math (and some don't). If your class is mostly engineering students then they will be more concerned with the practical applications of the Laplace transform. At the end of the lecture, you could bring up a more technical remark. You could also invite your students to office hours and recommend additional reading if they want to learn more.

In terms of what to cover, I would make sure to explain the informal or non-rigorous definition of the dirac delta "function" provided $f(t)$ is continuous on an open interval containing $t=0$ 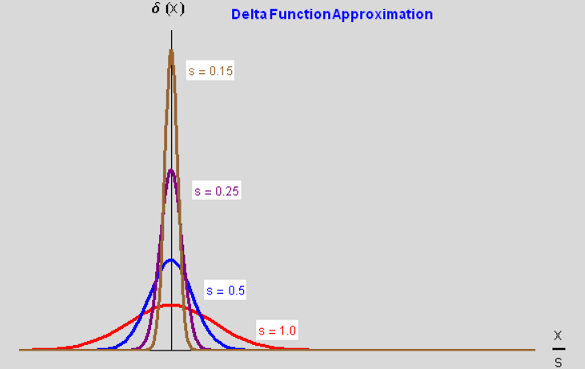 The second property I would cover is

which can be visualized by choosing two or three example functions for $f(x)$. I would then use the definition of the Laplace transform to show the shifting property

which is true provided $t\ne a$ and $f(t)$ is continuous on an interval containing $t=a$. I would then show that for $a\ge 0$ this implies that

which leads to your example

to find the inverse Laplace transform (assuming that students will be required to use the linearity of the Laplace operator and then find its inverse).

Outside of this, I would include anything about the delta "function" which you think is important. You could go through a second example similar to the one above where a different technique is used to find the inverse Laplace transform (such as a partial fraction decomposition followed by a different problem which can be solved directly through formulas previously derived). You could also spend more time graphing the other two properties to show how the delta "function" interacts with different example functions of $f(x)$. If you have $40$ or $50$ minutes to lecture, then you could spend the last $10$ minutes talking about what a distribution is (even though students wouldn't be tested on this material - some students will certainly be interested in learning more).

Some might say that you could pass it off as a "function" which is infinite at $t=0$ and is zero everywhere, with integral equal to $1$. However, the distribution approach might be too complicated, especially for engineering students fresh out of Calculus.

The second approach might be the best. You hide the overly complicated details, while still keeping the spirit of the Dirac delta as something that isn't a proper function. Don't leave out the fact that $\langle f,\delta \rangle = f(0)$ though.

If anything, you can tell the more curious students to seek you later for more details, if you have the time. Not everyone in engineering is interested in mathematical formalism; as long as the tool serves its purpose, it might be fine to them.

Not the answer you're looking for? Browse other questions tagged ordinary-differential-equations laplace-transform education distribution-theory dirac-delta or ask your own question.

2
Heaviside function in the function whose Laplace transformation is $e^{-(\gamma+s)}/[(s+\gamma)^2+b^2]$
2
Show that $\int h_n'(x) \varphi(x)\, dx \to \langle \delta, \varphi\rangle$ - Generalized functions theory
3
A Differential Equation with Dirac Delta as the Non-homogeneity Term
2
Second derivative of absolute value function proportional to Dirac delta function?
1
Existence of the Dirac δ-function defined as a distribution?
0
Lebesgue-integrability of the Dirac delta function?
2
Criteria for a sequence of funcions converge to Dirac Delta
0
Convergence to Delta Dirac Distribution