On Page 76 in Y. Matsumoto's "An Introduction to Morse Theory" he introduces an $m$-dimensional $\lambda$-handle including the following figure: 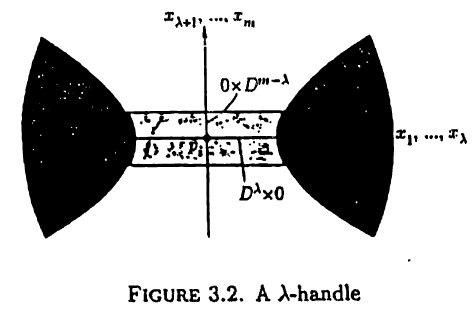 The lightly shaded area corresponds to the inequalities

Remark: the lightly shaded area is supposed to be the "bridge" between the black areas.

My question is: shouldn't the first inequality rather be

such that the slightly shaded area is described by the inequalities

Thanks for any consideration!

Pictorially, the shaded region is close to the horizontal "axis", deformable to a tube connecting the two black regions. The inequality not in dispute is $x_{\lambda+1}^2+\cdots x_m^2\le\delta$, which forces the shaded region to be a subset of the tube around the horizontal axis. M's inequality $x_1^2+\cdots x_\lambda^2-x_{\lambda+1}^2\cdots -x_m^2 \le \epsilon$ says $f(x)\le \epsilon$, that is, cuts out $M^\epsilon$.

The OP's interpretation that the constraint should be $x_{\lambda+1}^2+\cdots +x_m^2 \le \epsilon$ would restrict the shaded region to a tube about the "vertical" axis, as well, so the shaded region would be the the intersections of the vertical tube and the horizontal tube, a small blob about the origin, not connecting the two black regions.

I'm sure the OP understands the general thrust of the "lowering sea levels creates a land bridge or causeway (the shaded region) between Asia and America (the black regions)" story given in popular expositions of Morse theory. The $\epsilon$ inequality says that in this picture the causeway connects the two continents; the $\delta$ inequality says that the connection is narrow.

Not the answer you're looking for? Browse other questions tagged general-topology differential-topology morse-theory or ask your own question.