Confusion about the definition of an acyclic graph

Definition 1: A graph, G, is acyclic if it contains no undirected cycles (otherwise it’s cyclic).

These definitions confuse me.

Definition 2 seems to reinforce this idea, by suggesting that an undirected cycle can simply ignore edge directions.

On the other hand, I found this website which claims this is a directed acyclic graph: 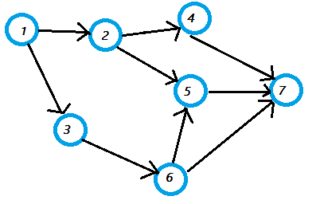 I think I am probably just misinterpreting all of these definitions. Can we define the terms "acyclic", "cyclic", "undirected cycle" and "directed cycle" in some other way to help clarify what they mean?

I think I am probably just misinterpreting all of these definitions? Can we define the terms "acyclic", "cyclic", "undirected cycle" and "directed cycle" in some other way to help clarify what they mean?

Yes, many graph theory textbooks do a better job than yours did. The best way is to start with a firm understanding of (undirected) graphs and move from there to digraphs. So let's start over and eliminate all the useless words.

A cycle is a walk in a graph where the origin and internal vertices are all distinct and the terminus is the same as the origin. A graph is acyclic if it does not contain a cycle.

With that said, a directed graph is one where the edges are all endowed with a direction. Associated with every digraph is its underlying graph which is an undirected graph with the same vertex and edge set but "ignoring" the direction. So when we say that a directed graph is or isn't acyclic, we are implicitly referring to whether the underlying graph is acyclic. But the added structure gives us the notion of a directed cycle, which is a directed walk in the digraph (i.e. one the follows all of the directions) where again the origin and internal vertices are distinct and the terminus and the origin are the same.

The only wrinkle in all of this is that the meddling computer scientists have forced the term directed acyclic graph (DAG) on us. This refers to a digraph that contains no directed cycle (although its underlying graph may contain a cycle). It's not a good name, but there's no putting that toothpaste back in the tube so we have to deal with its existence.

Coming back to the two introductory questions you asked:

By Definition 1, can a graph be acyclic and yet contain a directed cycle?

Definition 2 seems to reinforce this idea, by suggesting that an undirected cycle can simply ignore edge directions.

Yes. A cycle is a feature of the underlying graph, so the direction of the edges in the digraph is not considered.

The good news is that all of this is essentially invisible once you have these definitions straight in your mind. Does this clear it up?

Not the answer you're looking for? Browse other questions tagged graph-theory definition network directed-graphs or ask your own question.

3
Let $G$ be a loop-less undirected graph. Prove that the edges of $G$ can be directed so that no directed cycle is formed.
22
What is the difference between a loop, cycle and strongly connected components in Graph Theory?
2
Confusion about definition of cycle
2
What is the actual definition of a "Directed Cycle " in graph theory?
2
Example of non-simple cycle in a directed graph
2
Arborescence of a graph
1
Difference between Oriented Graph and Directed Acyclic Graphs (DAG)
1
Show, that if the removal of a vertex $v$ reduces the depth of a minimal acyclic orientation, every longest path contains $v$
1
Maximum cliques of the transitive closure of a chordal DAG