How to understand the concept of the Picard mapping?

The texts below are from Ordinary Differential Equations by Arnol'd

And the book says the following 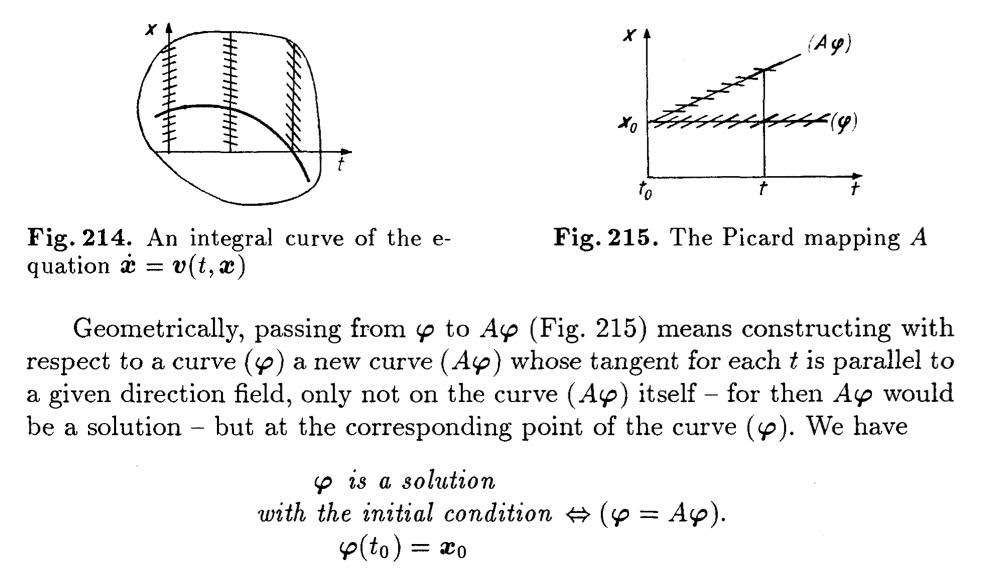 I can't understand this geometrical representation at all. How does the tangent for each $t$ be parallel to $\varphi$? What does it mean "for then $A \varphi$ would be a solution"? A solution of what?

Any help is appreciated!!

Let's take a simple analogy: The equation $ax=\tan x$ can be seen as a fixed-point equation with iteration $x_{k+1}=\frac1{a}\tan x_k$. However, in general this iteration does not converge or even stay bounded. Now with a simple transformation using the inverse tangent, one gets a family of fixed-point iterations $x_{k+1}=n\pi+\arctan(ax)$ which converges very nicely for every $n\ne 0$.

With differential equations it is the same, any fixed-point form of the equation $x'=v(t,x)$ that contains the derivative contains with it an operation that is unbounded, even more, you would have difficulties to find a space where it could be a fixed-point iteration. Inverting the differentiation by integration, $x(t)=x(0)+\int_0^t v(s,x(s))ds$, results in a fixed-point operator that maps continuous functions to continuous functions, so the space question is trivially solved. The "smoothing" properties of the integration also lead to the contraction property that one needs for convergence.

Remark: this all seems rather labored to me, probably because I have not read Arnold's book. The point is that the Picard mapping is, under appropriate circumstances, a contraction, from which the existence/uniqueness theorem for ODE's follows easily. I personally think the best way to see the "geometry" is with differential geometry. Lee's book covers this material in great detail, and is very readable!

6
Is there an integral form of Newton's method?
3
Uniqueness theorem in non authonomous ODE
6
What does it mean to extend curves to the projective line
3
Existence and Uniqueness Theorems: When to use Picard-Lindelöf, Lipschitz, etc.
2
Picardâ€“Lindelöf_theorem with parameter : what regularity?
0
Uniqueness of IVP using Picard-Lindelöf
0
Linear system of ODEs - about the comparison of different solution methods