the angle between two great circles on the sphere

I am trying to learn spherical geometry, but I have difficulty resolving a simple issue. 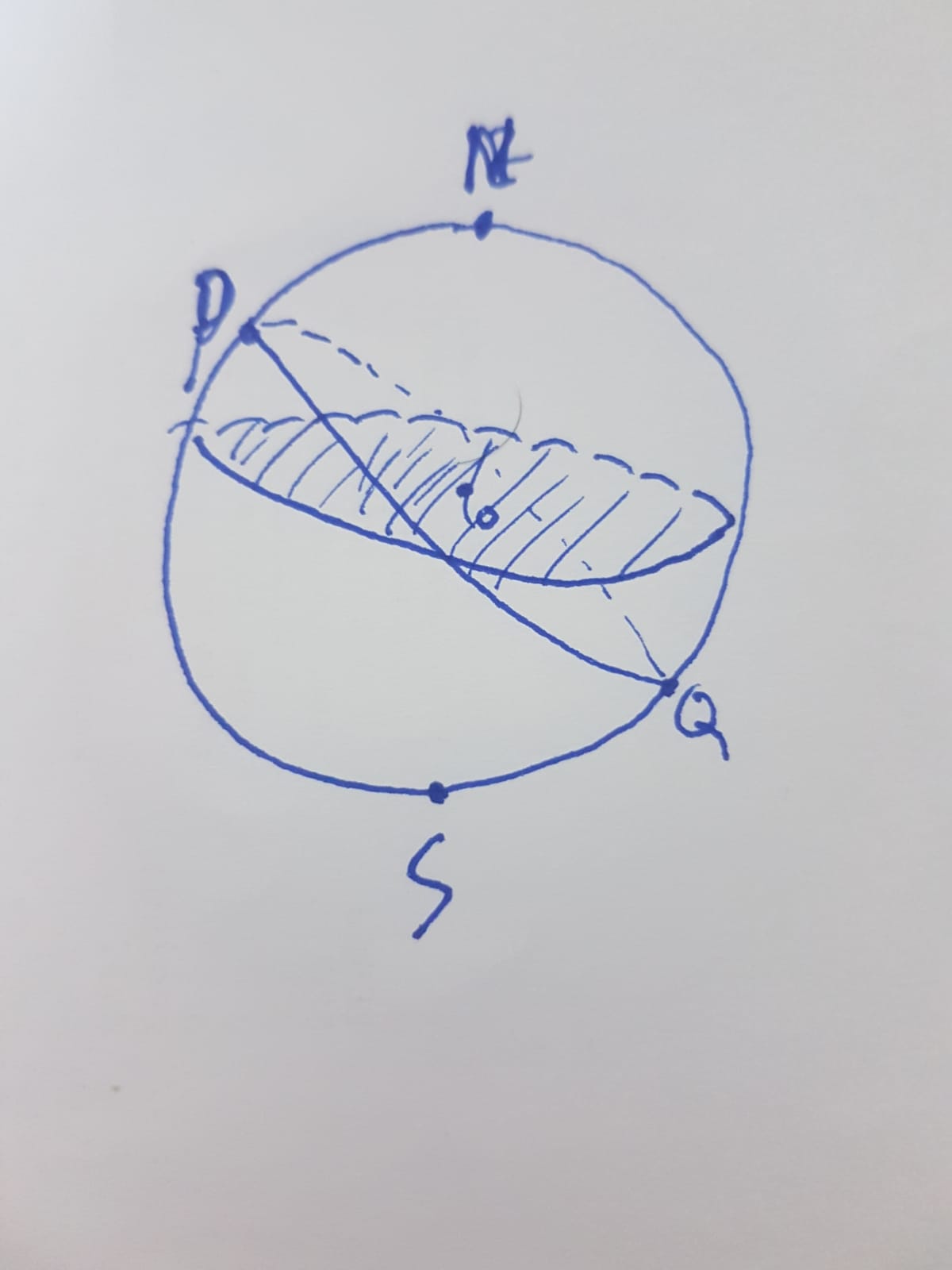 My question is about the angle between those great circles at the point P. It seems to me that the angle is indeed $90$. but according the definition of this source (point 9):

"By the angle between two great circles is meant the angle of inclination of the planes of the circles."

It seems that the planes of the great circles are not perpendicular - meaning the angle between them is not 90.

I would appreciate if someone would instruct me what I'm missing here, and how to show, formally, that the angle is 90?

First, the point $P$ is the one closest to the North pole. Since great circle are the straigh line of spherical geometry, the shortest distance between a point and a line is obtain with a perpendicular.

The normal of the plane passing thru $P$, $Q$ and the two poles is on the $x$ axis. E.g. the normal could be the vector starting at $O$ pointing toward were the equtorial plane meet the oblique plane.

The normal vector of the oblique plane passing thru $P$ and $Q$ is in the $yz$-plane. The normal could be the vector starting at $O$ pointing toward the mid point between $P$ and $Q$ on the great circle passing by the poles.

The two vectors are perpendicular.

think coordinates for a unit sphere centered at the origin. take the plane of the paper (for your diagram) to be the $xz$-plane. this contains the circle PNQS whose equation is: $$ x^2 + z^2 = 1 $$ the normal to this plane lies along the $y$-axis.

this is also the axis about which the horizontal circle has been rotated around to bring it to the position shown. thus a normal to the rotated circle lies in the $xz$-plane, and is thus always perpendicular to the y-axis, for any angle of rotation.

Not the answer you're looking for? Browse other questions tagged spheres spherical-geometry or ask your own question.

1
Reflections On Sphere Surface / Getting Great Circle from two 3D points
5
Finding the northernmost latitude in a great circle that passes through two points on the sphere
3
Great Circles in $SU_{2}$
0
Area between great circle and circle of latitude
1
How to calculate angle between two directions on sphere
2
Angle between two 'small circles' on the surface of a sphere
2
relationship between a great circle arc and a latitude circle arc at a given latitude
0
What is the angle from (0,0) to (longitude, latitude)?