Everyone loves all lovers.

Here is what i did: 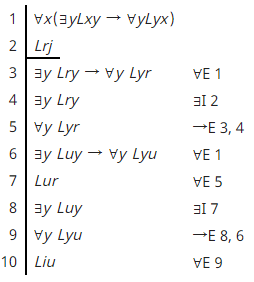 Is this the best we can do, or are there shorter approaches?

Yes, all the shortest proofs in natural deduction consist of 10 steps (included the 2 assumptions), because you have to apply 3 elimination rules for the quantifiers and 1 elimination rule for the implication, for 2 times.

For instance, if you translate the first assumption as $\forall x \forall y \forall z(Lxy \to Lzx)$ (which is logically equivalent to $\forall x (\exists y Lxy \to \forall y Lyx)$), the shortest proof in natural deduction is the following:

It all depends on what rules you have in your system.

For example, the Fitch system I use allows you to instantiate multiple quantifiers at once, so representing the first premise as $\forall x \forall y \forall z (Lxy \to Lzx)$, it can do: 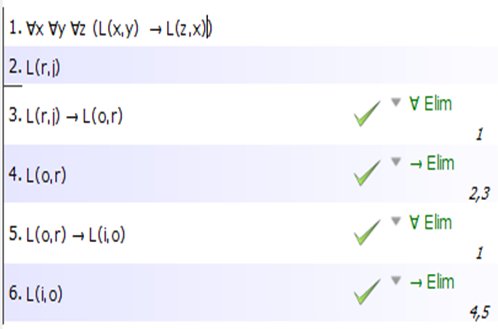 Moreover, suppose we had in addition to that some rule that generalizes Modus Ponens so you can chain through any number of conditionals in $1$ step. Let's call it 'Chain': 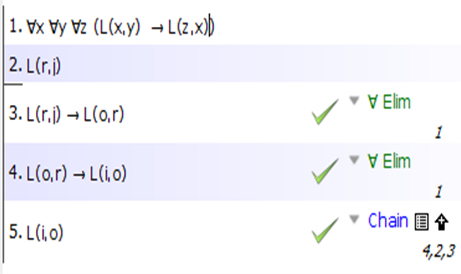 Then, there is of course my trusty 'Hokus Ponens', formally defined as:

Tada! ... Hey, you never said the rules in the proof system had to be sound!

Finally, since he argument is valid, one an always define an inference rule that matches the very argument. It would be completely ad hoc, but theoretically it's always possible Hence, every valid argument can, in theory, be proven by a single valid inference rule.

Not the answer you're looking for? Browse other questions tagged logic first-order-logic predicate-logic natural-deduction formal-proofs or ask your own question.

3
Does "Everyone loves all kittens" imply "Everyone loves a kitten"?
0
Can First Order Logic identify that two variables are the same object?
0
Proving a tautology via truth trees
1
Confusion between existential and universal quantifier
0
A translation in predicate logic
1
Translations from English to Language of Predicate Logic (PL)
3
Proof using natural deduction (Tautology)
0
Quantified Logic Symbolisation
0
Proving Validity with Venn Diagrams for Arguments Containing Relations