A simple algorithm can be used to compute the digits of $Z$. See below its coded version (in Perl). Note that $a, b$ are represented by $alpha, $beta in the program. The variable $sum is used to double check that the computations were successful, and give you some idea of how many digits can be accurately computed: it converges to $Z$, and represents the successive approximations of $Z$ using an increasing number of terms in the formula at the very beginning of this article.

Is there a simple expression or recursion that maps the digit of $Z$ in base two, to its digits in the system discussed here? Of course there is a one-to-one mapping: if you know the digits in one system, then compute $Z$, then compute the digits back into the other system. But I am looking at something smarter than that, also hoping to find patterns between the two representations (digits) of a number $Z$ in both systems.

In the case $a=-0.5, b=0.5$ (not covered here) the one-to-one mapping between the two digit systems (mine versus standard binary) is described in section 5 in this article.

Also, if you pick up a number at random in $[\frac{a}{1-a}, \frac{b}{1-b}]$, then in my system, the proportion of digits equal to 1, is $b$. By contrast, in the standard binary system, that proportion is 50%. In both systems, successive digits are not auto-correlated (true for the immense majority of numbers, called normal numbers.) 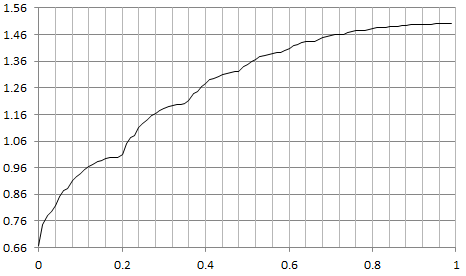 You can encode a message using the new numeration system proposed here. However, if you use (say) $b=0.6$, it will be very obvious to the hacker that you used $0.6$ since about 60% of the digits will be equal to one. The hacker will then easily decode your message. But you could pepper the encoded message with a number of digits equal to zero, at specific locations, to reduce the proportion of digits equal to one, from 60% to 50%. Then the hacker won't know which $b$ you used, and won't be able to easily decrypt your message. You need to make sure that when adding zero's, you do it in such a way that the correlation between successive digits remains equal to zero.

I am also curious to see what happens when $b\rightarrow 0.5$ or $b\rightarrow 1$. I also plan on investigating the case $b=3/4$, or more generally, $b$ a rational number, in more details, and I will provide an update if I find something interesting.

Browse other questions tagged sequences-and-series number-theory probability-theory binary or ask your own question.

1
Trying to understand binary number equation
1
Probability of a binary communication system
4
Proof that a block of digits doesn't repeat twice in a row in an irrational number in binary
6
How often (i.e. asymptotic density) is the reversal of the binary representation of $7n$ is a multiple of $7$?
2
Derive the posterior distribution and compute the posterior mean.
4
Maximum run in binary digit expansions
47
Limit associated with a recursion
13
The proportion of binary digits of $\sum_{k=1}^\infty \Big\lfloor{\frac{k}{2}\sqrt{p}\Big\rfloor}\cdot2^{-k}$ equal to one, is $> 0.978$ if $p=143$.
0
Is the number 0.251 reachable in the binary number system(with decimals)?
1
Is there a formula for finding binary numbers in a binary string?