I was reading some Complex Analysis, and came across this concept that; says you have the extended complex plane which is illustrated as the $x,y$-plane as the complex plane, and the $z$-plane is added, so that $(0,0,1)$ is $\infty$. The book says, "the hemisphere $z<0$ corresponds to the disk $|z|<1$ and the hemisphere $z>0$ to its outside $|z|>1$."

I don't understand why we are considering the entire sphere, when I understood that the extended complex plane was just the x-y-plane, and then we add on the point $(0,0,1)$. Even if we considered everything in $3$ dimensions, how is it that the top of the sphere corresponds to the inside of a circle on the complex plane, and the bottom half to the outside?

Thank you for your explanations/clarifications!

By adding a point $\infty$ we are actually making the complex plane compact. The extended complex plane $\hat{\mathbb{C}}=\mathbb{C}\cup\infty$ is homeomorphic to the Riemann Sphere. As we can see, the infinity point $\infty$ is actually defined as a "limit point", which is called "the one-point compactification of $\mathbb{C}$". Here is a formal definition of $\infty$ from Lectures on Riemann Surfaces by Otto Forster. In this case, $n=2$ since $\mathbb{C}\cong\mathbb{R}^2$. Though this definition is written in the language of open sets, you can see that it is the limit point of all lines that point outward from the origin.

More intuitively speaking, this infinity point is the final "destination" if you start from the origin and go straight in any direction. Going in any direction from this origin is equivalent to going up from the south pole on the Riemann Sphere. The infinity point is not a point in $\mathbb{C}$, just like $(0,1)$ has a limit point $1$ although $1\notin(0,1)$. So the compactification is just like adding a one-point boundary to the complex plane.

EDIT: in case you need to visualize CyclotomicField's answer (red dots are points on the sphere and the blue ones are on the plane): 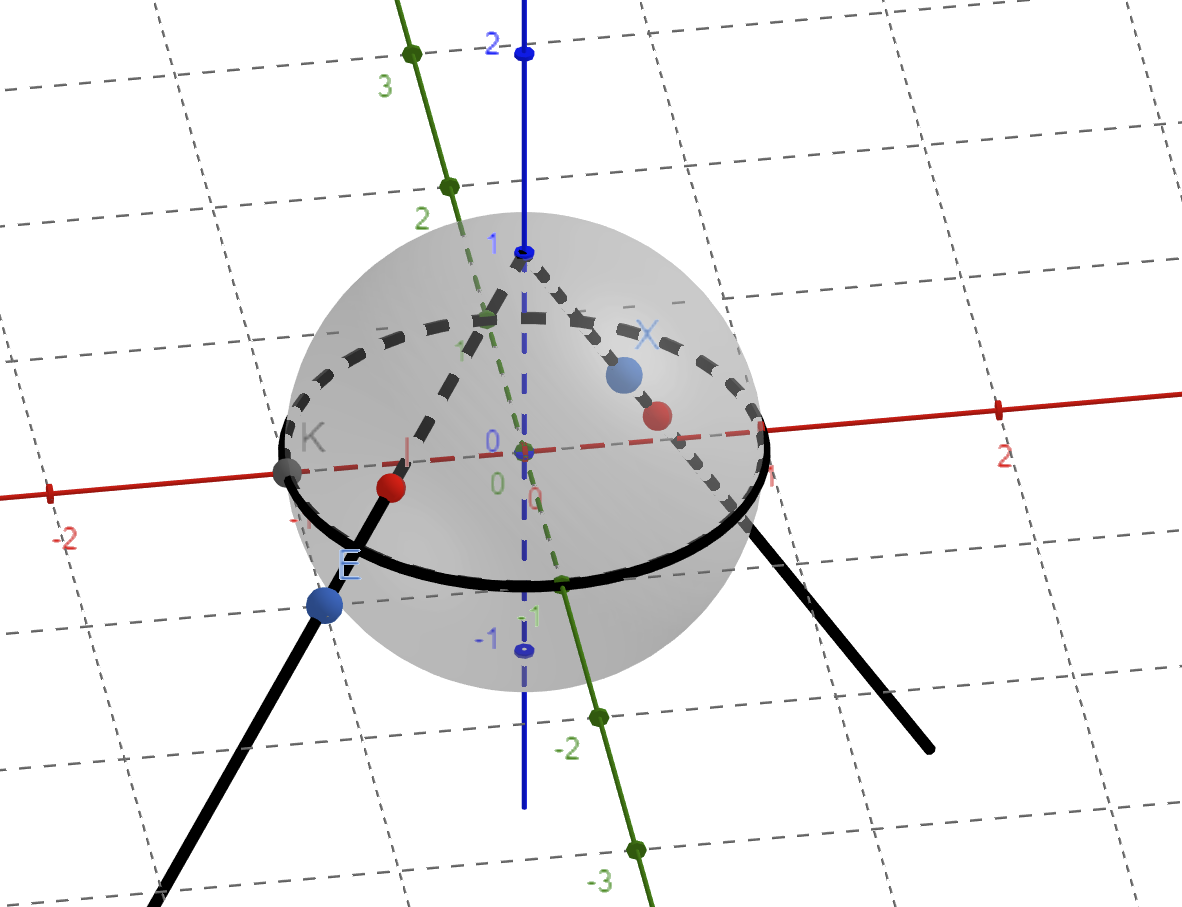 Geometrically, if we use the analogy of the earth the sphere is split in half by the $x$-$y$ plane around the equator and $(0,0,1)$ is the north pole. From the north pole to the south pole the line goes directly down and will correspond to the point $(0,0)$ in the $x$-$y$ plane. Moving it up towards the equator it must stay on the interior of the unit circle until it reaches the part where the sphere and plane intersect. At the equator it's exactly the unit circle, and going beyond that moves the line to the outside of the circle for the upper half of the sphere.

Not the answer you're looking for? Browse other questions tagged complex-analysis riemann-surfaces riemann-sphere or ask your own question.