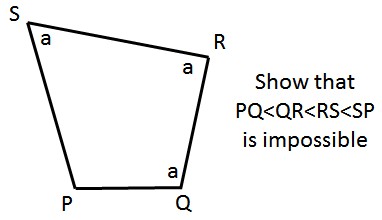 Fig. 1 : An obviously inexact figure (for the very fact that it is impossible to have such a quadrilateral !).

I have attempted to work in different directions, Bretschneider's formula, spirals, etc... without any result.

Remark : The connection with the cited problem or more exactly the formulation given in the fourth line of the accepted solution by @Jethro is as follows. Points $P,Q,R,S$ correspond resp. to complex numbers $D,D+Cz,D+Cz+Bz^2,0$ where $z=re^{i\theta}$ is a complex root of equation $D+Cz+Bz^2+z^3=0$ with common angle $a=\pi-\alpha$ and lengthes $PQ=D,QR=Cr,RS=Br^2,SP=r^3$. We have to prove that $r \leq 1$. Therefore, I have assumed that $r>1$, which, taking into account that $D \leq C \leq B$, yields relationship (2), aiming a contradiction. 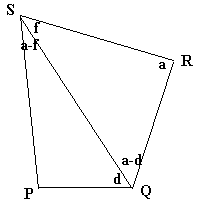 As shown & explained in Relationship of side lengths and angles of a triangle, plus as mentioned in the comment about Euclid's I.18, the angle opposite the greater side length is greater. Thus, with $\triangle QSR$, since $SR \gt QR$, you have

Using an aspect of the Inscribed Angle Theorem that tells us $Q$ and $S$ must lie on congruent circular arcs with common chord $\overline{PR}$, we have this diagrammatic proof: 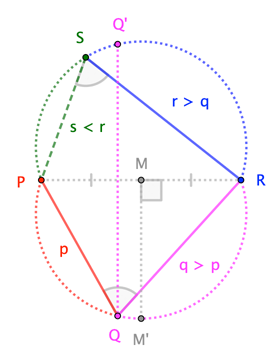 Like @JohnOmielan's proof, this one doesn't use any information about $\angle R$. Unlike @John's proof, this one is only valid in Euclidean geometry (where IAT holds). It's worth noting that both proofs are valid even for self-intersecting $\square PQRS$ with $Q$ and $S$ on the same side of $\overline{PR}$.

Regarding a hyperbolic counterpart: The locus of a point that makes a constant angle with two other points is a simple curve. According to this answer on MathOverflow, the locus in the Klein model is actually a circle. So, embedding my diagram in the Klein disk with $M$ at the origin almost works. One would still need to show that smaller arcs (in the model) correspond to smaller lengths (in the geometry); presumably, the argument would effectively duplicate @John's logic, so this diagrammatic approach merely adds unnecessary complication.

Not the answer you're looking for? Browse other questions tagged geometry quadrilateral or ask your own question.