Previously, I'd been taught that convergent series "converge" to a certain number. Taking a convergent improper integral as an example, the value of the integral would be "definite" and not infinity.

However, every time I think about this, it doesn't make sense to me (I suspect it's probably because of a flaw in some basic understanding).

[That is] incorrect. As long as the positive values an you are summing decrease to 0 fast enough, the sum... will be finite.

While I don't doubt this, it still doesn't give me any intuition. My thinking is still that, regardless of how fast you approach zero, since you have "infinite time" to sum "infinite numbers", your speed at which you approach zero wouldn't matter. The analogy doesn't really convince me. Could someone help clear up (conceptually) whatever misunderstanding I may be having?

I think this is the root of your problem.

since you have "infinite time" to sum "infinite numbers",

It took mathematicians many centuries (from Zeno to the rigorization of analysis) to learn how to deal with infinity. Along the way some ideas that seem intuitive had to be discarded.

When you sum an infinite series you are not actually adding together infinitely many numbers. The only additions you ever perform are finite sums. Moreover, whatever adding you do, you don't do one after another in real time.

Instead you look ("all at once") at the sequence of all (finite) partial sums. If that sequence has a limit, you define that limit as the sum of the series.

Note that asserting that the sequence has limit $L$ is not saying it "gets closer and closer to $L$". There is no "closer and closer", which again suggests the passage of time. The limit is $L$ if the partial sums are (not get) as close to $L$ as you might wish as long as you add up sufficiently many terms. Never all the terms.

The key is partial sums.

and its geometric visualization as a infinite sum of squares, from which we can see that the value for the series must be less than a finite quantity since it is contained into a unitary square 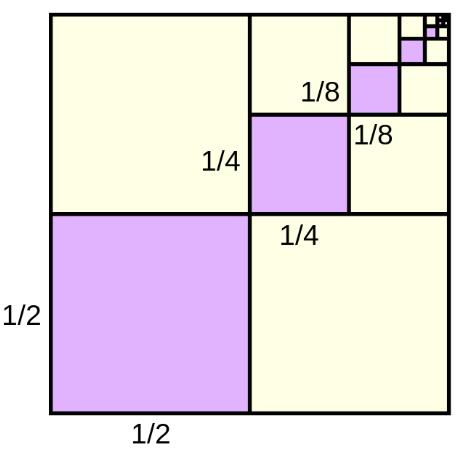 Not the answer you're looking for? Browse other questions tagged integration convergence-divergence improper-integrals or ask your own question.

7
Improper Integral of $x^2/\cosh(x)$
2
Conditional convergence and Riemann's series theorem
3
How would you proof that this series is convergent (no solution needed)?
3
What's about the Frullani extension for infinite series?
0
Comparison test on $1/(e^x)$ vs $1/(e^x+1)$
5
Proof of connection between improper Riemann Integral and Lebesgue integral
24
Assume I'm unhappy with the Riemann Rearrangement Theorem. How else can I define a series?
1
Why are the sums of absolutely convergent series not affected by changing the order of summation?