Why is the tangent of an angle called that?

I am teaching the foundations of trig and find it a bit weird that tangent is called that.

I've never questioned it before, but what I keep finding online is the phrase 'tangent of an angle'.

Is anyone able to explain, maybe using some visual intuition, why we call it the tangent of an angle? Especially in the context of the unit circle.

Does it relate to the definition of a tangent to a curve?

I can't say for certain that this is the origin of the name of the function.

But if you construct a line that is tangent to the unit circle, using either of these constructions:

then the red segment has a measure of $\tan x$.

In the second figure, the green segment has measure $\cot x$.

This is not an explanation why the word tangent is used (I think the other answers nicely do this), but a historical digression.

The first occurence of a mathematical symbol as denotation of the tangent-function I have personally seen is in Leonhard Euler's "Introductio in Analysin Infinitorum, Volume 2" from 1748. This was written in Latin which at that time was the universal language of European scholars. The Latin word is "tangens" which is the present participle of the verb "tangere" and Euler abbreviated it by the symbol tang. In many modern languages the word "tangens" was replaced by "tangent" (English) or similar forms ("tangente" in French and Italian) , but for example in German and Russian the original form is used. Note that the "t" in the end of the word comes in via Latin declination.

Although the concept of tangent was known much longer (for certain in Arabic/Islamic mathematics, first formal use by Abū al-Wafāʾ who lived from 940 to 998), the word "tangens" was at first introduced by Thomas Fincke in his book "Geometria rotundi" from 1583. 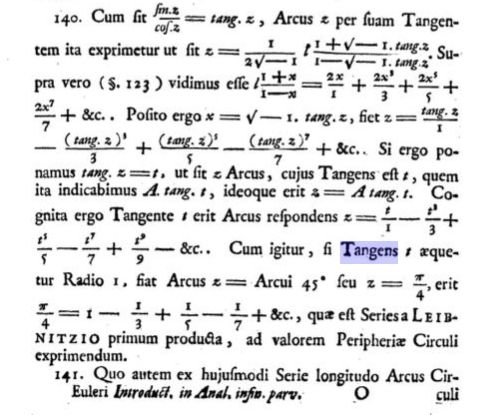 Edited: After a little "research" I found that the symbol tan for tangent was introduced long before Euler. In fact, it seems that Albert Girard introduced it in his work "Trigonométrie" from 1626. However, other sources say it was introduced by Edmund Gunter in 1624.

It may also be interesting that the Arabic word for tangent is "shadow" which is in use for more than 1000 years. 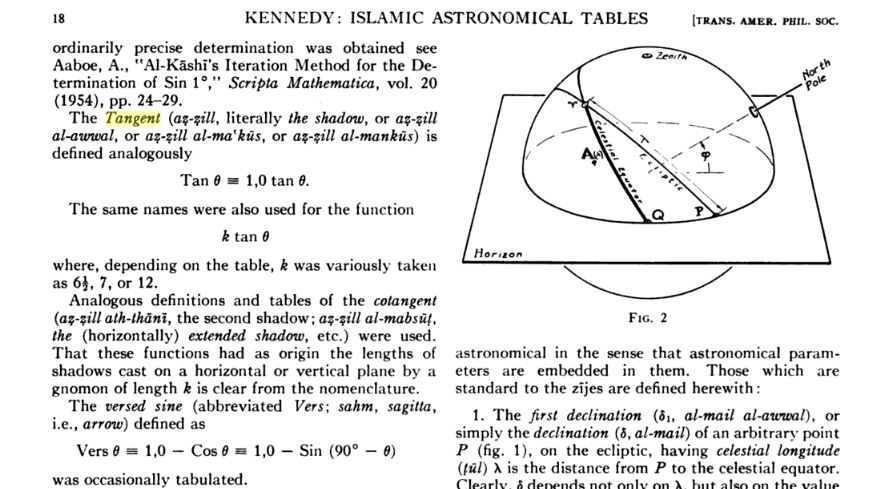 Although I hardly believe there is any particular reason for this, the following interpretation might be satisfactory.

Not the answer you're looking for? Browse other questions tagged trigonometry terminology or ask your own question.

8
Intuition for graphing Sine/Cosine
2
Intuition around why domain of x of arcsine and arccosine is [-1;1] for “real result” & domain for arctangent is all real numbers
5
Finding all the values of $\theta$ for which $\tan(\theta)=\sqrt3$; problem with understanding.
1
Is it possible to gain intuition into these trig compound angle formulas - and in general, final year high school math?
1
lines of bearing bounding a circle
0
How to prove that in the unit circle the tangent line in a given point is equal to slope of the radius that intersects the circle in that same point?
0
How to improve at handling the (mild) complexity of high school trig?
2
Sine, cosine, tangent: defined as ratios in a right triangle, but how to understand the negative values for angles outside 0-90 degrees?
3
Intuition behind $\sin(\theta)$ when introducing this to high school students
2
Why is tan(x) denote a line perpendicular to the tangent, not the tangent itself?