What is the minimum of $n$?

Here is some partial progress.

This continued fraction starts off $2+\frac{1}{1+\frac{1}{2+\frac{1}{\cdots}}}$. After the initial $2$, the remaining terms are periodic with period $3861006$. (This periodic part is palindromic, so you only need to compute half of it.) The convergents look like they are growing exponentially, with rate about $3.6^n$. With intelligent use of a large number library, it should be possible to run through the whole list, as long as we clear memory as we go. (Storing a couple of 8 million bit numbers and computing with them is fine, storing 4 million of them is not.) I'm not going to do this, though, it sounds too much like work.

An interesting hint is that the largest integer in that list of length $3861006$ is $3103897$, occurring in position $472622$. Very good rational approximations often occur just before very large terms, so I might try scanning down to that position to see if it happens to give one of the very small numbers above.

The answer is very likely $495$, occuring after $18576$ terms of the continued fraction. Since $x$ and $y$ probably have $20,000$ digits or so, I'm not going to list them, but in principal they should be computable using this method. (As I was writing this answer, I see that Douglas Staple has computed them.)

What I actually did was to find the smallest positive value of $123456789 x^2 - 987654321 y^2$ occurring for $(x,y)$ a convergent of the continued fraction. It is not quite guaranteed that this is the minimum for any $(x,y)$, but I'm not going to work harder. The key was remembering enough about how continued fractions work to realize I could compute the answer without storing any of those thousand digit numbers.

The matrix products in $(\S)$ are called reduced quadratic forms, and they tend to be much smaller than $(x,y)$; only ten digits or so. I decided to just compute these. Here is my Mathematica code.

The variable foo is of the form $\{3, L \}$ where $L$ is a list containing the entire periodic part. I make this into a single list:

I tested this code by using it to solve the Pell's equation $x^2-13 y^2=1$ but was too lazy to write a general module, I just altered the constants by hand.

I personally like to think in terms of Conway's topograph. One observation in the first chapter of Conway's The Sensual (Quadratic) Forms is the fact that the smallest values (both positive and negative) of an indefinite binary quadratic form can be found along the "river". So one way to answer this question is to move along the river and examine values we encounter.

How do we know it is time to stop? We can either iterate until the initial triple (or its permutation) shows up again or we can cheat by making use of the fact that the period is 3861006. In the language of Conway's topograph, there are 3861006 instances of $c$ becoming positive before the river repeats itself.

Here is a naive Mathematica implementation of the algorithm:

The whole thing takes about 3 minutes on my laptop, so it is definitely less efficient than the approach using continued fractions. However, Conway's topograph is very versatile. For example, it also provides a straightforward algorithm to solve the representation problem: given an integer $n$, to decide if it is a value of the quadratic form.

Checking the first 50000 convergents, the minimal solution I've found corresponds to the 18577th convergent. This has $n=495$, consistent with @David's answer. I did the calculation in PARI/GP, double-checking the solution $(n,x,y)$ with python. The values for $x$ and $y$ are pretty scary looking:

EDIT: I posted a proof of the "riverbend" property at Generate solutions of Quadratic Diophantine Equation

EEDDIITT:: a fair portion of the necessary material is in BUCHMANN_VOLLMER, especially a (revised) Lagrange method on pages 129-130, and the fact that the minimum occurs in the cycle is Corollary 6.16.2 on page 139. For some reason they do not prove the full Lagrange theorem, that all small values that are primitively represented occur as coefficients of forms in the cycle. Not my fault.

I finally wrote an implementation of Lagrange's cycle method with everything in C++ using GMP integers. Here is what happens, only the forms are printed that achieve a new low in absolute value, one comparison for negative values, one for positive. The key point is Lagrange's theorem, page 111, Theorem 85, in Introduction to the Theory of Numbers by Leonard Eugene Dickson, that, given and indefinite form $\langle a,b,c \rangle$ or $f(x,y) = a x^2 + b x y + c y^2,$ with discriminant $\Delta = b^2 - 4 a c$ positive but not a square, then all integers $n$ with $|n| < \frac{1}{2} \sqrt \Delta$ primitively represented by $f(x,y)$ occur as the first coefficient in the chain of reduced forms equivalent to $f.$ A comparison of Lagrange's method, put briefly in pages 21-24 of Binary Quadratic Forms by Duncan A. Buell, with Conway's topograph method, reveals that Lagrange reduced forms are precisely those with $$ ac < 0, \; \; b > |a+c| $$ and that furthermore, these are precisely the locations where the forms "cross the river." Marty Weissmann calls these riverbends.
For the example below, the discriminant and the floor of the square root of it are DISCRIMINANT 487730524450541076 DISC SQRT 698377064. 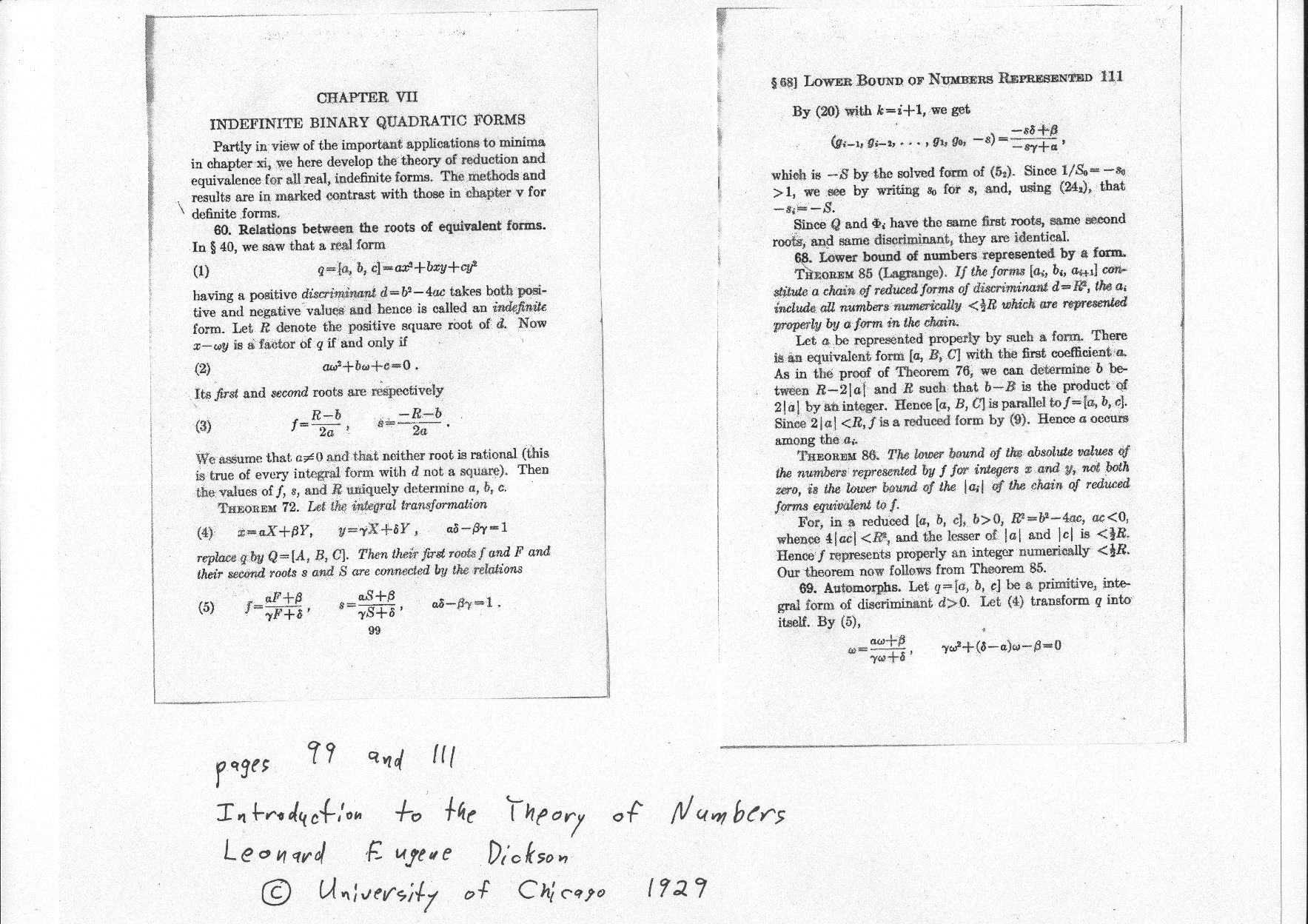 I also put in some custom commands, here are the five smallest positive (primitively represented) values and the five smallest negative (in absolute value). I also told it to show the first 20 rows and the values of $\delta$ which show how to calculate the next "right neighboring" form, given $\langle a,b,c \rangle$ the new form is $ \langle c, -b + 2 c \delta, a - b \delta + c \delta^2 \rangle .$

Not the answer you're looking for? Browse other questions tagged number-theory diophantine-equations or ask your own question.