Why is the Riemann sphere the compactified complex plane?

Physicist here, although math inclined but I certainly won't brag about it on a math forum, I am encountering a confusion with the compactification of the complex plane. I am learning conformal field theory in 2d and, as we use conformal map mapping some points to infinity and vice versa, we work on the Riemann sphere defined as $$\hat{\mathbb{C}} = \mathbb{C} \cup \{\infty\}$$ I have a doubt on having only "one infinity" and not seeing it as a full circle whose radius tends to $\infty$. For example compactifying $\mathbb{R}$ means adding the two infinities $\pm \infty$. Is it because all those infinities could "topologically" connected when one needs to cross all the real axis to go from $+\infty$ to $-\infty$?

The Riemann sphere is not just $\mathbb{C} \cup \{ \infty\}$. It this space endowed with a particular topology. You can think of that topology as arising from adding infinities at the end of some "infinitely large" circle, and then collapsing all those infinities to a point. This perspective is highlighted when considering the stereographic projection of $S^2$ onto $\mathbb{R}^2 $ or $ \mathbb{C}$. 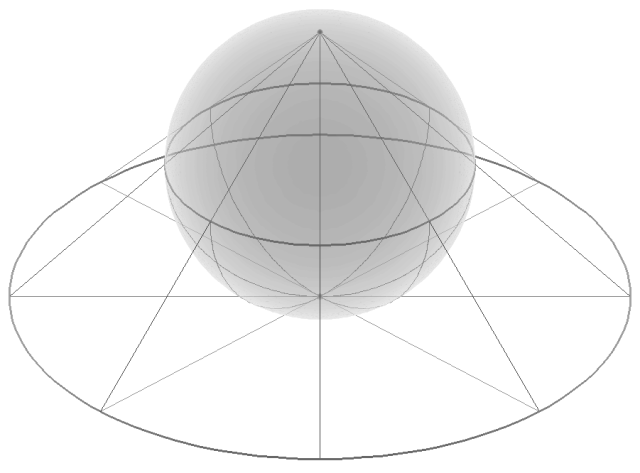 From a technical, point-set topology perspective, this is an instance of the Alexandroff one-point compactification. Another way to view the Riemann sphere is as the complex projective line.

It might help to think first about compactifying $\mathbb R$ by adding one point rather than two. Here is one way: identify $(-\infty,\infty)$ with $(-\pi,\pi)$ in the usual way, say using $x \mapsto 2\arctan x$, and then instead of compactifying $(-\pi,\pi)$ to the closed interval $[-\pi,\pi],$ instead compactify it to a circle by wrapping around the unit circle (in terms of formulas, you can use $\theta \mapsto e^{i \theta}$): this adds just one point instead of two.

So you can form a one-point compactification of $\mathbb R$ to get a space that is topologically a circle.

We could also compactify $\mathbb C$ by adding a circle at infinity instead of just a point, but this isn't as useful when studying complex analysis and related questions (for example because holomorphicity involves considering derivatives along multiple directions --- think of the Cauchy--Riemann equations --- and so adding points at infinity for each direction from the origin isn't so helpful when studying complex analysis). And it wouldn't be topologically homogeneous.

There are situations where you can see a "circle at infinity" in the context of the Riemman sphere. For example, the one-point compactification of $\mathbb R$ cuts the Riemann sphere into two halves (the upper and lower halfplanes), and we can think of the one-point compatification of $\mathbb R$ as being a "circle at infinity" for each of these half-planes.

Only one $\infty$ is normally considered in complex analysis because it makes it possible to apply results to that point that apply to other points, i.e. it makes sense to speak of a function being holomorphic at $\infty$.

Not the answer you're looking for? Browse other questions tagged general-topology complex-analysis or ask your own question.