Why does it make no sense to define addition on points in geometry?

Here is a simple question: Why does it not make sense to define addition on points in geometry?

To be a bit more specific: assume we are talking only about standard Euclidean geometry.

It is clear that a barycentric combination of points is well-defined.

If I understand correctly, it also does not make sense to define the addition of points like this: $P+Q := O + \vec{OP} + \vec{OQ} $ (i.e., just use the position vectors), because the result would not be invariant wrt. different choices of $O$.

But why would it be impossible to define the addition of points in any meaningful way? Or is it?

Any definition of addition will imply the definition of a special origin point $O$, because $O$ can be defined as the point so that $O + A = A$ for any $A$. In Euclidean geometry, we traditionally do not consider an origin point - e.g., it is not defined anywhere in Euclid's Elements. I believe it was not until Cartesian geometry that this idea was considered.

Euclidean geometry is typically considered to be invariant under isometries - transformations of the plane that do not change the distances between two points, such as reflections, rotations and translations. That is, if you take any theorem and proof in Euclidean geometry and apply an isometry to every line and point, the theorem and proof will still be valid. Nothing is assumed about any "absolute" location on the Euclidean plane. Since the result of an addition of two points depends on their location relative to the origin, which may change when you apply such a transformation, it is typically not considered in traditional Euclidean geometry.

With the barycentric concept, we are able to give a meaning to $A+B$, but it's no longer a "pure" point but a weighted point $2C$ where $C$ is the midpoint of $[AB]$.

What is this concept of "weighted points". We are going to see that one can build a universal space (see figure below ) mixing points and vectors, giving in particular the ability to define new points out of already existing ones by means of barycentric combinations.

Let us consider the simplest case.

where $A$ and $B$ are known points and $a,b \in \mathbb{R}$, makes sense because it defines unambiguously a geometrical entity with two cases :

In fact, the case $a+b=1$ defining points can be given a different setting : we will say that point $C$ is defined unambiguously by $A$ and $B$ through the (more general) following definition :

(the equivalence with the initial definition is achieved by dividing LHS and RHS of (1) by $a+b$.).

let us give three examples :

There is a model for the operations we have been achieving based on an "embedding" of plane $\mathbb{R}^2$ into space $\mathbb{R}^3$ (the "universal space") with reciprocal transformation :

(where the third axis accounts for weights $w$).

Understanding (2) is essential for the justification of the operations we have done). 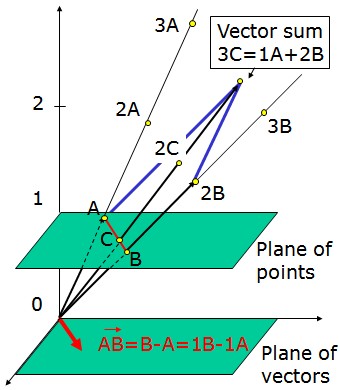 In fact, (2) can be explained in the following way (see figure) : a (non horizontal) line issued from the origin is an equivalence class of weighted points with weight $w$. The representatives of these equivalence classes can be taken at $w=1$, the set of ordinary points (weight one) constituting a "workplane" placed at "one meter high", the ground plane being a kind of mirror of the latter plane, devoted to vectors. This is known as the "projective interpretation". The barycentric interpretation is as follows.

Let us define for example $3C=1A+2B$. How can be visualized this relationship ? Let us build the "parallelogram of forces" (as a physicist would consider it) with weighted points $1A$ and $2B$, resulting into the weighted point $3D$. Now it remains to consider line $OD$ : its intersection with the plane of points gives point $C$. Briefly said, "in a natural way" $C$ is the weighted sum of $A$ (weight $1$) and $B$ (weight $2$).

4
Higher-dimensional Extension of Triangle Geometry?
6
Why Do The Axioms of Euclidean Geometry Not Need To Include the Definition of Space?
0
Problem with Cauchy Schwarz equality proof
4
Angles in Hilbert's axioms for geometry
6
Does Euclidean geometry require a complete metric space?
1
Is the elementary definition of a scalar misleading?
4
Why is euclidean geometry also called parabolic geometry?
2
Proving Hilbert's Axioms as Theorems in $ℝ^n$
0
Finding the ratio of 2 sides, and expressing OP in terms of a, b, c