Let's say you are in the middle of applying the Simplex Method to an LP problem. You've reached a tableau and by checking the sign of the objective coefficients you decided to insert a variable a to the basic set in the next step and exclude 𝒂 basic one 𝒃.

a. Is it possible that in the next step, the variable 𝒂 will become non-basic again?

b. Is it possible that in the next step, the variable 𝒃 can become basic again?

The answer to (a) is yes. Consider the LP in the image below, whose feasible region is the triangle ABC. The decision variables are $x$ and $y$, and the slack/surplus variables are $s_1$ and $s_2$. 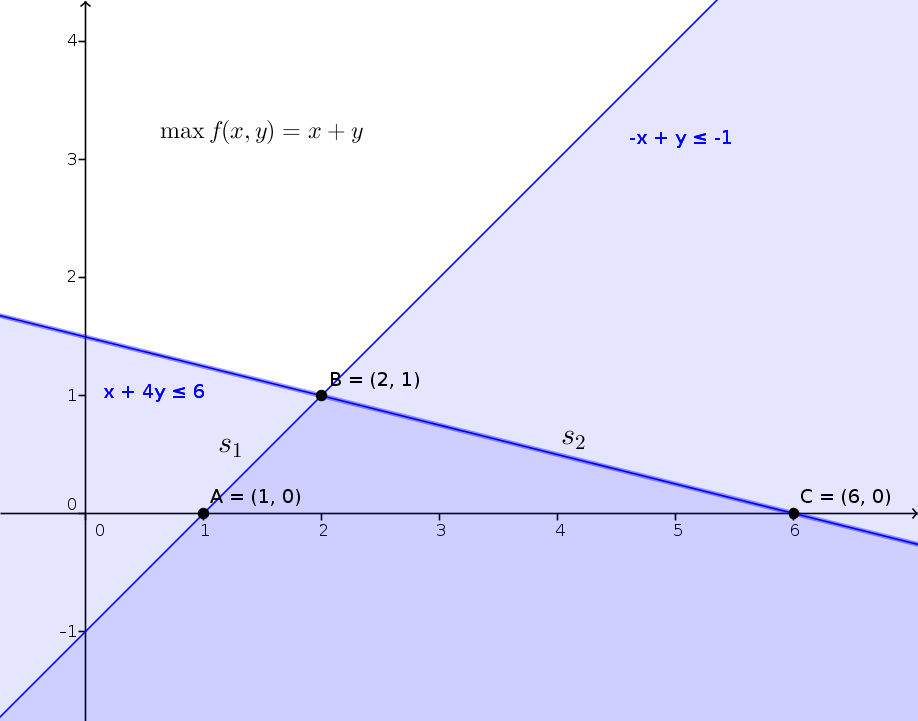 The simplex method starts at A and (after pivoting an artificial variable out of the basis) has $x$ and $s_2$ as the basic variables. Since the rate of increase of $f$ is faster along edge AB than along edge AC, the next pivot moves from A to B, removing $s_2$ from the basis and adding $y$. The final pivot moves from B to the optimal vertex C, removing $y$ from the basis and adding $s_1$.

The answer to (b) is trickier. I don't think this can happen at a degenerate corner, and it cannot happen at a nondegenerate corner. I'll just give a hint to the proof in the absence of degeneracy: if it did happen, you would be moving along an edge of the feasible region that contained three distinct vertices, which contradicts the definition of a vertex.

Not the answer you're looking for? Browse other questions tagged linear-algebra optimization linear-programming simplex operations-research or ask your own question.