Does imaginary part of complex number represents the meaning of down payment or stealing in real life??

I am new to complex numbers and trying to understand them and find real life conditions which could be interpreted by them "like positive one apple is gained apple and negative one apple is lost apple....so what is +1i apple and -1iapple" ....

I know that electromagnetism ,ac, wave analysis and quantum mechanics are explained by complex numbers but i can not hold them in my hand like apples...
So i had first thought that +1i may represent the situation when two persons A,B are making bets "gambling" over the result of match
And from point of view of person A : person A put -1i dollar with intermediate person ,person B put +1i dollar with the intermediate person .....
Here for person A, I consider the dollar he gives for the intermediary person -1i because if he loses, he transfers this -1i dollar to real -1 dollar ....
and the dollar given by B to the intermediary is +1i relative to A because if A wins he converts this +1i into real +1 dollar...
I do not know if my understanding is right but i continue to study complex numbers and i solve the following problem :
p(x)=-0.3x^2 +50 x-170 where p is the profit and x is the lamps produced per week.
"note here that i do not know the price of lamp or the cost of manufacturing and that the profit is nonlinear"
then I try to find number of lamps which make profit of 3000 dollars.
the solution is complex number with real part 83.3333 and imaginary part +-60.1849i.
Now i try to get profit for real part alone "1913.3333"and imaginary part alone"916.6667" then add them together but the result is 2830 not 3000.how this is possible????
Note that 2830 +170 =3000????!!!

I know that my question may be vague ... this is because i am confused about meaning of complex numbers and i will accept all edits to make it more clear...

Basically math is about making some "arbitrary" definitions that makes things good. You can define whatever you want (if it is not self contradictory, like let $x=1$ and $x\neq 1)$, but you try to define things in such way that you get good results.

For example, think about analytic geometry. Its about describing plane geometric things. The usually $xy-$plane are useful for, for example, describing straight lines, because the equations are simple, like $y=2x$. But describing rotations on the $xy-$plane, usually, leads to really complicated equations, involing $\sin$ and $\cos$. How can we avoid this?

That is a way to understand the complex number, and my favorite one.

I work for an aircraft manufacturer, and we needed to figure out the location of the landing gear axles on an aircraft as it sits on the ground. For most of our aircraft models, the main landing gear use a trailing link configuration. This consists of a trunnion extending from the aircraft, with a bar (the "trailing link") connected to the trunnion by a pivot extending back to hold the wheel. A shock absorber (the "oleo") also connects to the trunnion to the trailing link. The location of the axle depends on how compressed the oleo is. Here is a simplified view of the geometry: 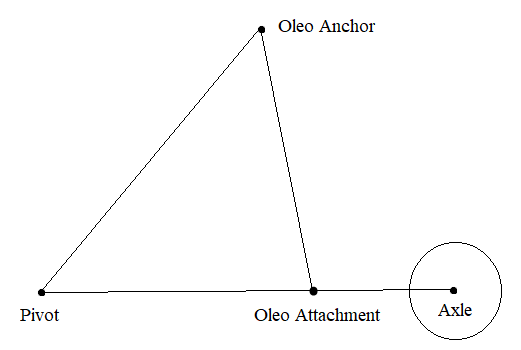 The location of the pivot and the anchor are known constants, as well as the distances from pivot to oleo attachment and axle. By taking a measurement of the oleo, we can know all sides of the triangle and can calculate the location of the attachment point, and therefore also the axle.

When I first did this calculation, I solved it using vectors, setting the origin at the Pivot. The Anchor was a known vector, and I rotated it down to the axle line by the amount needed to make the Oleo the right length.

The algebraic calculation was rather messy. But I reproduced the calculation in a number of variants of the tools we used, until at some point I noticed that a formula I was looking at was exactly like complex multiplication. Suddenly it occurred to me that I had been doing it the hard way.

If I view this as the complex plane, with $0$ at the pivot, and represent the Anchor, Attachment, and Axle as complex numbers, the rotation of Anchor to Attachment is just one complex multiplication, and converting the Attachment to the Axle is another (which in the actual calculation is not a real number, as the Pivot, Attachment, and Axle are not really in a straight line). The Oleo length is $|\text{Anchor} - \text{Attachment}|$, which made the calculation of their ratio more sensible as well.