Locating the focus, vertex, and directrix of a conic when viewed as a plane section of a cone

The following image is from the Wikipedia Article on Conic Section: 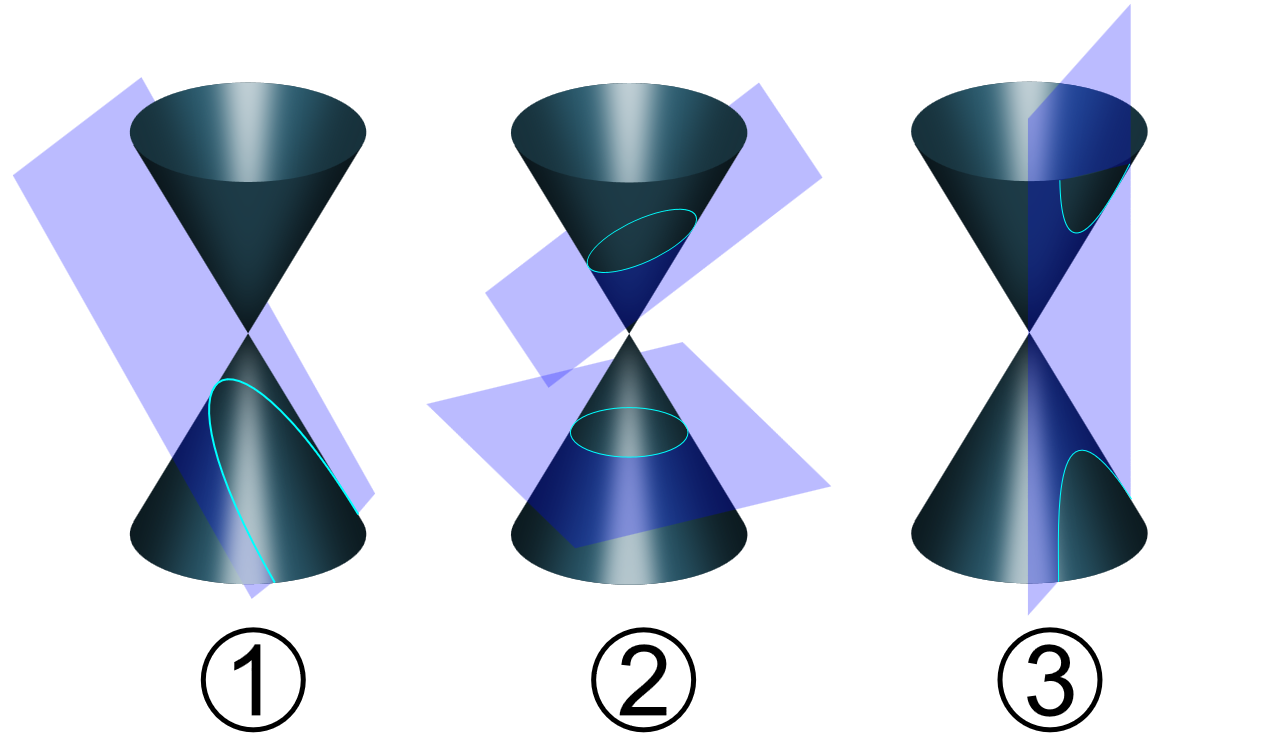 Where are the focus, vertex and the directrix in the above diagram? I know they must lie on the plane which cuts the right circular cone, but I am unable to determine their position.

For the circle in the lower cone in $(2)$, I concluded that the centre is the point where the axis of the cones intersect the slicing plane due to symmetry reasons. But things get tricky when I move on to other conics.

Kindly explain in a simple way that could be understood by a High School student. Thank you in advance.

I wish to express my sincere thanks to @Blue and @amd for clearing my doubt in the comments.

The location of the focus, vertex, and directrix of a conic can be easily determined by knowing some basics about Dandelin Spheres. Wikipedia gives the following explanation: 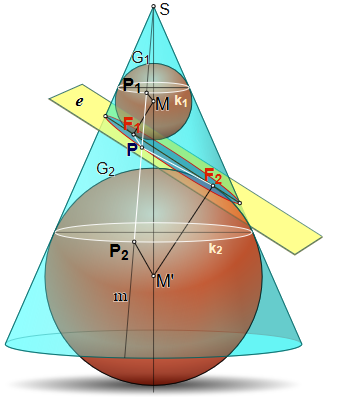 In the above diagram, the yellow plane cuts the blue cone forming an ellipse. Next, imagine inserting two spheres of maximum volume in the upper and lower parts of the cone demarcated by the slicing plane, such that they just touch the surfaces (curved surface of the cone and slicing plane) but don't peep out. These two are called as Dandelin spheres. The points at which these spheres touch the yellow plane (slicing plane), $F_1$ and $F_2$ are the foci of the ellipse. So now, we have located the foci of the ellipse.

The same Dandelin Spheres are helpful in determining the directrix and the vertex. The two spheres in the above diagram, touch the curved surface of the cone in a circle (represented by white circles $k_1$ and $k_2$. Let us consider, two planes passing through these two circles separately. These planes meet the yellow plane (slicing plane) in straight lines (unless and until the yellow plane cuts out a circle in the cone, when it's parallel to the base of cone). The two lines formed by the intersection of the three planes (slicing plane, and the two planes through the two circles) are parallel to each other. These lines are the directrices of the ellipse.

The above [.gif] explains the same visually. In this, the light blue plane is the slicing plane, orange sphere is one of the Dandelin spheres, transparent planes are those which pass through the circular region formed by the intersection of the spheres and the curved surface of the cone. Here the slicing plane, forms an ellipse which is shown by blue. The two parallel blue lines are the directrices.

Even though I've explained using ellipses, the same concept can be extended to other ellipses. For example, parabola since it has only one focus, has only one Dandelin sphere. Hyperbola has two foci in opposite nappes, so it has two such spheres in the two nappes. Using this we can determine the directrix and the focus of the conic.

Now, coming to the last part of the answer, finding the vertex. This is simple once we've found the directrix and the focus. Just draw a line perpendicular to the directrix passing though the focus. This line is the axis of the conic (and not that of the cone!). The point where axis meets the curve is the vertex.

5
Points at infinity of a conic section and its eccentricity, foci, and directrix?
3
Reconciliation of Cone-Slicing and Focus-Directrix Definitions of Conic Sections
5
When are cone geodesics planar
1
Locus of right circular cone vertices resulting from constant conic intersection
1
What will happen to Dandelin Spheres in case of Degenerate Conics?
1
What is the physical significance of the determinant $\Delta$ in the general equation of a conic?
0
Conics: why is the eccentricity and focal parameter well-defined, and how to show uniqueness of foci and directrices