Recently I've asked a question for how to solve Quadratic Diophantine Equation and I got one interesting answer. Link to question: The quadratic diophantine $ k^2 - 1 = 5(m^2 - 1)$

And indeed those pairs are solutions for my equation. (I excluded every non-integer numbers, because I'm only interested in integers)

Fundamental solution is (9,2) and using the above form I get:

And if I check this pair isn't solution to the equation. Where am I wrong?

The "topograph" for $x^2 - 13 y^2$ is definitely more complicated than the previous ones, because the continued fraction for $\sqrt {13}$ has period 5, your two previous examples had period 1. Confirming the "automorph" matrix, which just preserves the quadratic form:

Oh: you said you can do continued fractions. It happens that you can find all representations of 4 and 1 using the continued fraction of $\sqrt {13},$ so you can confirm a good deal of the Conway diagram, the vectors in green, whatever. 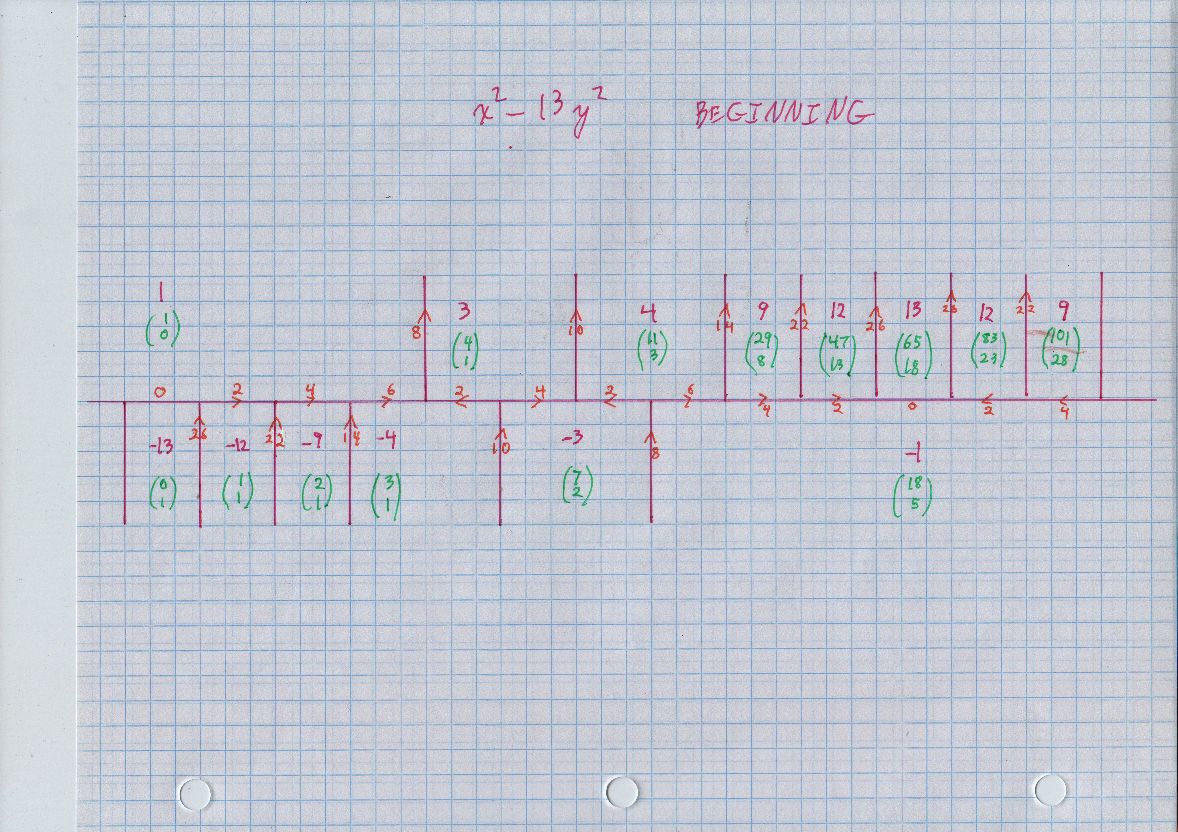 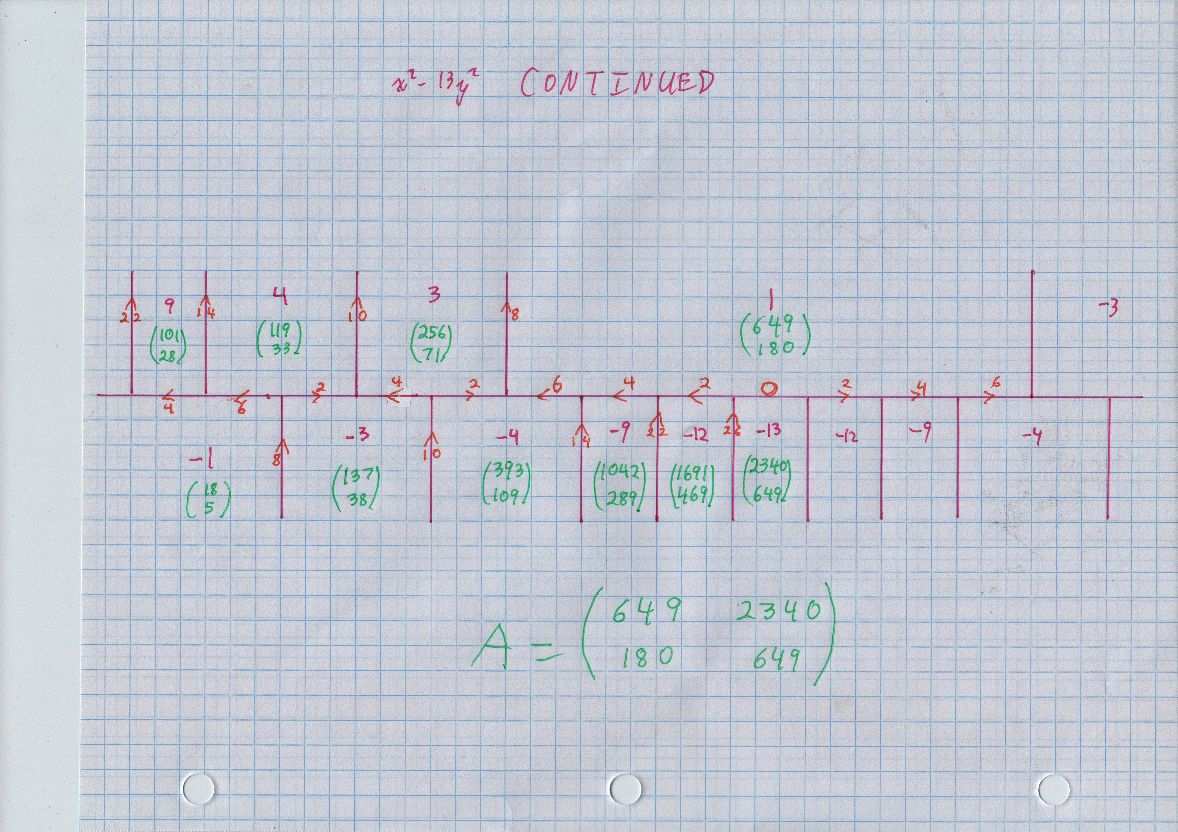 Stefan, you generally need to add more layers away from the river, and that is the case for $x^2 - 12 y^2$ and the target number 13. In this expanded diagram, you see how moving away from the river increases the absolute value of the purple numbers. However, none possessing a primitive representation ($\gcd(x,y)=1$) is missed. Here the two starting vectors for 13 are $(5,1)$ and $(11,3).$ 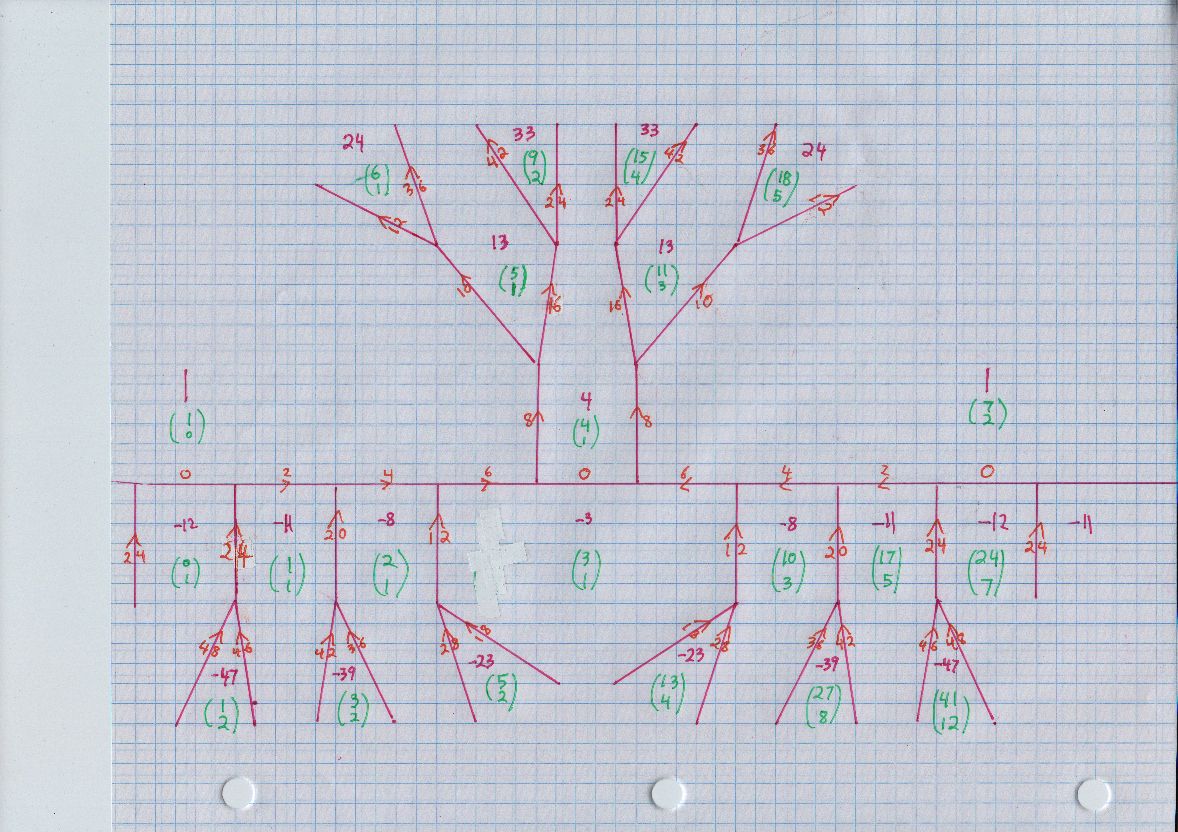 This method is in Conway's book. Automorphs are treated in the most detail in Buell's book Binary Quadratic Forms. Also in A Course in Number Theory by H. E. Rose. 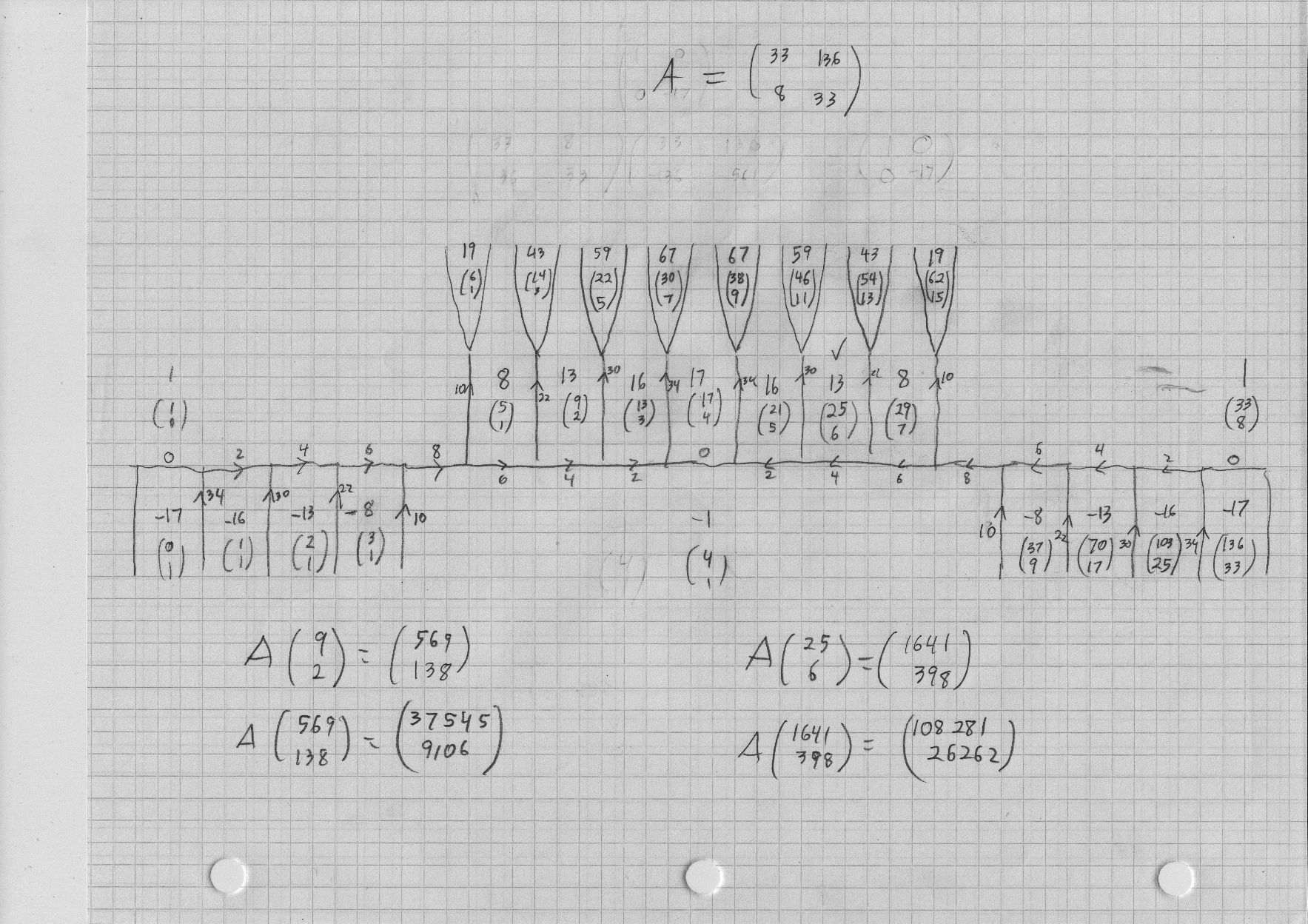 The generating unit is now the square of $4+\sqrt{17}$. Apart from that, nothing much changes.

This is a proof of something I mentioned to awllower in comment, somewhere. In my diagrams of Conway's topograph, I draw the "river" as a straight line, and edges leaving it as perpendicular to the river. On page 20 in Conway's book, we read

In other words, if you stray from the river, the values go up (in absolute value).

EDIT: Martin Weissman of U. C. Santa Cruz is writing a book on number theory that will include and expand upon the Conway topograph. He likes to call these special locations riverbends. His image, and the illustrations in Conway's book, have the river in something of a sinuous shape, for a while arcing around a positive value, then bending the other way and arcing around a negative value, and so on. As I drew my diagrams on graph paper and made all edges straight and the river a straight line, so this attractive image does not come across. The blog about progress on the book is HERE

Let me emphasize that each edge with a little orange arrow and number refers to an indefinite quadratic form $\langle a,b,c \rangle.$ The number $b$ is the little orange number and is always positive or $0.$ If you rotate the page, or screen, or your head, so that the arrow appears to point up, then the purple number in the open area on the left is $a,$ while the purple number in the open area on the right is $c.$ Since the numbers $a,c$ are on different sides of the river, one is positive and one negative, so $ac < 0.$ And we always have the same $\Delta = b^2 - 4 a c$ is constant for all forms in the topograph, is positive but not a square. So in these cases, $b < \sqrt \Delta.$

Years ago, I noticed that the forms where river crossing occurs are Lagrange reduced. A discussion of this notion is at webpage and in Duncan A. Buell, Binary Quadratic Forms.

THEOREM: if $\langle a,b,c \rangle$ is reduced, then river crossing occurs at that form.

THEOREM: if river crossing occurs at $\langle a,b,c \rangle,$ then the form is reduced.

This is a calculus type approach, so, like the first theorem, it applies to real numbers.

Not the answer you're looking for? Browse other questions tagged sequences-and-series number-theory diophantine-equations exponentiation or ask your own question.