Today I learned about Cauchy Sequences, defined as the following:

Assuming we are dealing with a complete metric space, all Cauchy Sequences converge, right? If so, for what sequences is it easier to show they are Cauchy in order to show they converge (as opposed to the limit definition of a convergent sequence)? My professor said they tend to be sequences whose limit is not immediately clear but I can't think of any such examples. Could someone please share an example of a convergent sequence whose limit and perhaps bounds are non-trivial but can be proven to be convergent by proving they are Cauchy?

A family of such examples comes from the following theorem:

The proof goes by showing that $(x_n)$ is a Cauchy sequence, and in fact, one can show that this statement is equivalent to Cauchy completeness. Now using this, one can cook up various example whose limit is by no means a known expression in terms of familiar functions and/or constants. For instance, choose an arbitrary assignment of signs $e_k\in\{-1,+1\}$ and set $x_n=\sum_{k=1}^{n} e_k/k^2$. Then the above theorem tells that $(x_n)$ converges, but except for a handful of examples, the exact nature of the limit is not known to us. And even in the case $e_k = 1$, the limit $\sum_{k=1}^{\infty} 1/k^2$ is given by the highly non-trivial value $\pi^2/6$, which is the content of the famous Basel Problem.

Another line of examples may be drawn from the following corollary of this theorem: 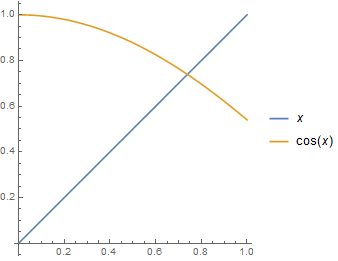 And again, we do not know how to write $c$ in 'closed form'.

Not the answer you're looking for? Browse other questions tagged sequences-and-series cauchy-sequences or ask your own question.