How to correctly formulate multiple constraints to multiple feasible regions into one?

I believe this is a linear programming question that basically boils down to correctly formulating a feasible regions constraints from OR statements between other feasible regions.

My direct question relates to the following 3 feasible regions. I believe I have the feasible region already constructed properly but my question is whether there is a way to combine them.

Geometrically this is a rectangular feasible region with a infeasible triangular region inside.

Again, want to know what would be the best way to formulate the constraints together on into one feasible region, if possible, without using ORs or is this not possible?

Linear programming expects to get a convex feasible region, so there's no way to do this with a single LP. 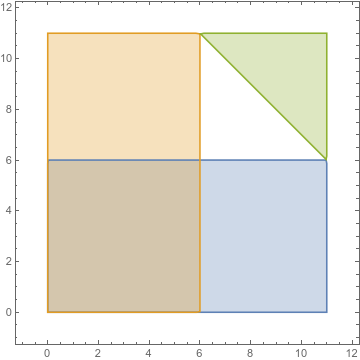 This sort of thing can be generalized to several interior exclusions: when the next step in the simplex algorithm would take one into an excluded region, switch to solving in that region until the next pivot would take you out of that region, then return to the external region. Note that every time you find a better optimum, you can add a new constraint "new points at least as good as this point" and drop all now redundant constraints.

Not the answer you're looking for? Browse other questions tagged linear-programming dynamic-programming or ask your own question.