Hitori is a Sudoku-like game.

These are its rules:

My question is about the ratio of black squares. I have played a good number of games and this ratio seems bounded around 30%, but I don't have the knowledge to find a precise good bound and prove it. I'd like to prove it myself.

The lower bound seems related with the 3rd rule. That is, you mark a square as black because you know that other square with the same number in the same row or column is white. There is no other reason for a square to be black.

The upper bound seems related to 4th, 5th and 6th rules. That is, you mark a square as white because it is adjacent to a black square, because being it black would make the set of white squares disconnected or simply because there is no white squares with the same number in the same row or column.

Thus, my question is: what graph theory should I study to find these bounds?

The lower bound seems related with the 3rd rule. That is, you mark a square as black because you know that other square with the same number in the same row or column is white. There is no other reason for a square to be black.

Actually, the key to the lower bound is rule 6: the uniqueness rule. To see this, note that any solution where a white square is not forced to be white because of rules 4 or 5 is not a unique solution, because it can apparently be made black without violating any of the rules, and so that would be a solution as well.

So yes, rule 3 will force for there to be black squares at all, but rule 6 is the one that will really tell you how many blacks there should be at a minimum in order for the solution to be unique.

For example, Rule 6 definitely rules out any solution with a $3 \times 3$ region of all whites, or else you could make the middle one black and have another solution: it would not create any two adjacent black squares, and all white cells keep connected. Also note that Rule 6 rules out any $1 \times 1$ Hitori boards, since making that square either white or black would both constitute a solution.

The way to get the most white squares (and thus the least black squares) without getting multiple solutions (i.e. without being able to make any further square black) is to have the black squares force as many white squares as possible, and for that, you want to use the following general pattern: 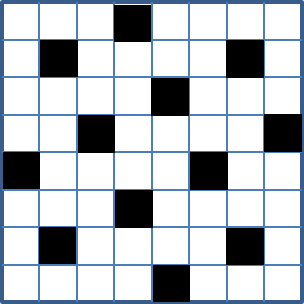 Note that this pattern has every black not at the edge force its $4$ neighboring squares to be white (rule 4), while no two blacks force the same square to be white, meaning that you cannot get a higher ratio of whites. The picture below illustrates this: every black is in the middle of a swiss cross consisting of $5$ squares, which can be used to tile the board. 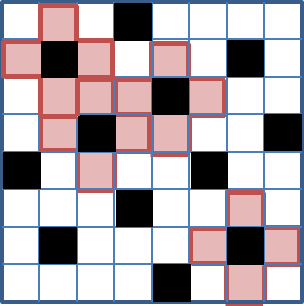 If this was an infinite board, you would get one black for every $5$ squares, and so the absolute lower bound is $20$%.

Now, for finite boards there still are some edge/corner pieces that are not forced white by the black ones. For the above $8 \times 8$ board any actual solution would have to look something like: 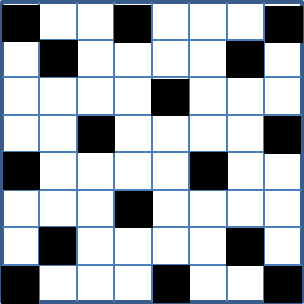 For the upper bound, you of course want to do the opposite: have the white squares be forced by multiple black squares. As such, two basic fill patterns are: 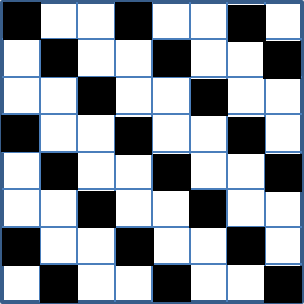 (every white is forced by $2$ blacks) 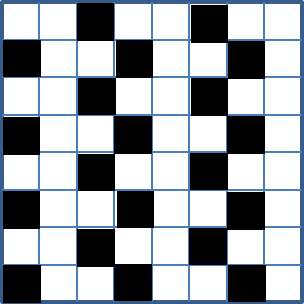 For an infinite board that gets you $1$ out of $3$ squares for both patterns, i.e. $33.3$%. Of course, none of these two are actual solutions, since not all whites are connected, and so for an actual board you'd have to take out some blacks again, and you'd get something like: 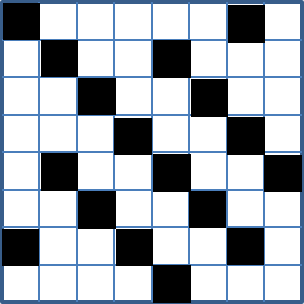 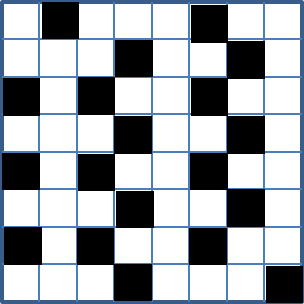 Now, you could probably generate some exact formula for specific $n$'s (probably involving ceilings and/or floor functions) using these patterns, but I'll leave that up to you.

Not the answer you're looking for? Browse other questions tagged discrete-mathematics graph-theory recreational-mathematics puzzle or ask your own question.