Some years ago I was interested in the following Markov chain whose state space is the positive integers. The chain begins at state "1", and from state "n" the chain next jumps to a state uniformly selected from {n+1,n+2,...,2n}.

As time goes on, this chain goes to infinity, with occasional large jumps. In any case, the chain is quite unlikely to hit any particular large n.

If you define p(n) to be the probability that this chain visits state "n", then p(n) goes to zero like c/n for some constant c. In fact,

In order to prove this convergence, I recast it as an analytic problem. Using the Markov property, you can see that the sequence satisfies:

For some weeks, using generating functions etc. I tried and failed to find an analytic proof of the convergence in (1). Finally, at a conference in 2003 Tom Mountford showed me a (non-trivial) probabilistic proof.

So the result is true, but since then I've continued to wonder if I missed something obvious. Perhaps there is a standard technique for showing that (2) implies (1).

Perhaps someone who understands sequences better than I do could take a shot at this.

Update: I'm digging through my old notes on this. I now remember that I had a proof (using generating functions) that if $\ np(n)$ converges, then the limit is $1\over{2\log (2)-1}$. It was the convergence that eluded me.

Another update: Here is the conditional result mentioned above.

Here's an alternative proof of the conditional result that my colleague Terry Gannon showed me in 2003.

Start with the sum $\sum_{n=2}^{2N}\ p(n)$, substitute the formula in the title, exchange the variables $j$ and $n$, and rearrange to establish the identity:

New update: (Sept. 8) Despite the nice answers and interesting discussion below, I am still holding out for an (nice?, short?) analytic proof of convergence. Basic Tauberian theory is allowed :)

New update: (Sept 13) I have posted a sketch of the probabilistic proof of convergence under "A fun and frustrating recurrence sequence" in the "Publications" section of my homepage.

Final Update: (Sept 15th) The deadline is approaching, so I have decided to award the bounty to T.. Modulo the details(!), it seems that the probabilistic approach is the most likely to lead to a proof.

My sincere thanks to everyone who worked on the problem, including those who tried it but didn't post anything.

In a sense, I did get an answer to my question: there doesn't seem to be an easy, or standard proof to handle this particular sequence.

Update: the following probabilistic argument I had posted earlier shows only that $p(1) + p(2) + \dots + p(n) = (c + o(1)) \log(n)$ and not, as originally claimed, the convergence $np(n) \to c$. Until a complete proof is available [edit: George has provided one in another answer] it is not clear whether $np(n)$ converges or has some oscillation, and at the moment there is evidence in both directions. Log-periodic or other slow oscillation is known to occur in some problems where the recursion accesses many previous terms. Actually, everything I can calculate about $np(n)$ is consistent with, and in some ways suggestive of, log-periodic fluctuations, with convergence being the special case where the bounds could somehow be strengthened and the fluctuation scale thus squeezed down to zero.

$p(n) \sim c/n$ is [edit: only in average] equivalent to $p(1) + p(2) + \dots + p(n)$ being asymptotic to $c \log(n)$. The sum up to $p(n)$ is the expected time the walk spends in the interval [1,n]. For this quantity there is a simple probabilistic argument that explains (and can rigorously demonstrate) the asymptotics.

This Markov chain is a discrete approximation to a log-normal random walk. If $X$ is the position of the particle, $\log X$ behaves like a simple random walk with steps $\mu \pm \sigma$ where $\mu = 2 \log 2 - 1 = 1/c$ and $\sigma^2 = (1- \mu)^2/2$. This is true because the Markov chain is bounded between two easily analyzed random walks with continuous steps.

$L$ and $U$ have means and variances that are the same within $O(1/n)$, where the $O()$ constants can be made explicit. Steps of $L$ are i.i.d and steps of $U$ are independent, asymptotically identical-distributed. Thus, the Central Limit theorem shows that $\log X$ after $n$ steps is approximately a Gaussian with mean $n\mu + O(\log n)$ and variance $n\sigma^2 + O(\log n)$.

Maybe this is equivalent to the 2003 argument from the conference. If the goal is to get a proof from the generating function, it suggests that dividing by $(1-x)$ may be useful for smoothing the p(n)'s.

After getting some insight by looking at some numerical calculations to see what $np(n)-c$ looks like for large $n$, I can now describe the convergence in some detail. First, the results of the simulations strongly suggested the following.

Update: I tried another numerical simulation to check these asymptotics, by successively subtracting out the leading order terms. You can see it converges beautifully to the levels $a_0$, $a_1$, $a_2$ but, then...

Update 2: I was re-thinking this question a few days ago, and it suddenly occured how you can not only prove it using analytic methods, but give a full asymptotic expansion to arbitrary order. The idea involves some very cool maths! (if I may say so myself). Apologies that this answer has grown and grown, but I think it's worth it. It is a very interesting question and I've certainly learned a lot by thinking about it. The idea is that, instead of using a power series generating function as in Qiaochu's answer, you use a Dirichlet series which can be inverted with Perron's formula. First, the expansion is as follows, $$ \begin{array}{ccc} \displaystyle p(n)=\sum_{\Re[r]+k\le \alpha}a_{r,k}(n)n^{-r-k}+o(n^{-\alpha}),&&(4) \end{array} $$ for any real $\alpha$. The sum is over nonnegative integers $k$ and complex numbers $r$ with real part at least 1 and satisfying $r+1=2^r$ (the leading term being $r=1$), and $a_{r,k}(n)$ is a periodic function of $n$, with period $2^k$. The reason for such exponents is that the difference equation (2) has the continuous-time limit $p^\prime(x)=p(x)/x-p(x/2)/x$ which has solutions $p(x)=x^{-r}$ for precisely such exponents. Splitting into real and imaginary parts $r=u+iv$, all solutions to $r+1=2^r$ lie on the line $(1+u)^2+v^2=4^u$ and, other than the leading term $u=1$, $v=0$, there is precisely one complex solution with imaginary part $2n\pi\le v\log2\le2n\pi+\pi/2$ (positive integer $n$) and, together with the complex conjugates, this lists all possible exponents $r$. Then, $a_{r,k}(n)$ is determined (as a multiple of $a_{r,0}$) for $k > 0$ by substituting this expansion back into the difference equation as I did above. I arrived at this expansion after running the simulations plotted above (and T..'s mention of complex exponents of n helped). Then, the Dirichlet series idea nailed it.

Finally, I added a much more detailed writeup on my blog, fleshing out some of the details which I skimmed over here. See Asymptotic Expansions of a Recurrence Relation.

Exchanging the order of summation gives

So it follows that

Now, as I recall there are theorems in Flajolet and Sedgewick's Analytic Combinatorics that allow us to deduce asymptotic behavior about the coefficients of $Q$ from these kinds of relations; I'm going to hunt one down now, and in the meantime others can see what they can do with this. 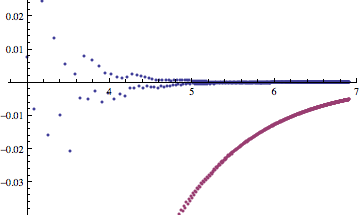 I think these observations are probably already in other answers, or even too simple to have been listed, but I wanted to add my working anyway:

23
On Dirichlet series and critical strips