How do I derive the game matrix in this game theory experiment?

A coin with probability $2/3$ of heads and $1/3$ of tails is tossed and the outcome is shown to player I but not to player II. Player I then makes a claim which may be true or false that the coin turned up heads or that the coin turned up tails. Then, player II, hearing the claim, must guess whether the coin came up heads or tails. Player II wins $\$3$ if his guess is correct, and nothing otherwise. Player I wins $\$3$ if I has told the truth in his claim. In addition, player I wins an additional $\$6$ if player II guesses heads. Draw the Kuhn tree of this game and put the game into strategic (bimatrix) form.

The solution: The Kuhn tree and the corresponding game matrix should look like this: 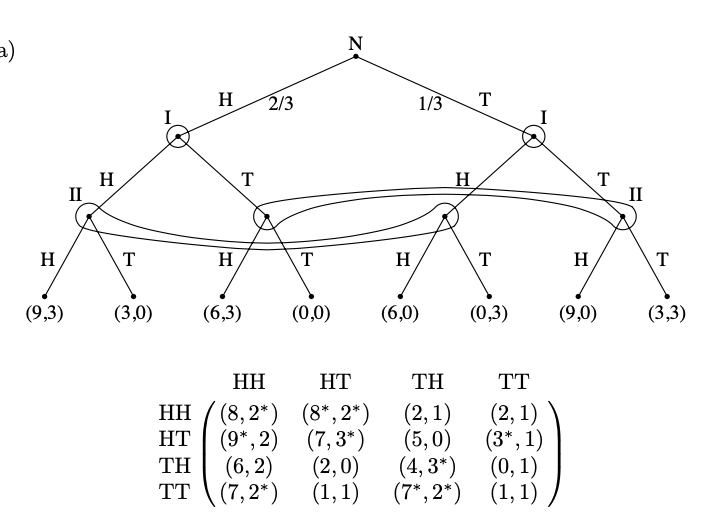 Not the answer you're looking for? Browse other questions tagged graph-theory game-theory trees or ask your own question.

0
How do we prove that e = RPC, in game theory?
8
game theory - coin flipping game
0
Signalling Game - How to draw the normal form matrix?
0
Game theory, Kuhn tree [ extensive form of game ]
0
Game theory - understanding representation
2
How can this be an optimal strategy?
4
Understanding Game Theory Terminology in Probability Based Games