An heuristic description of parabolic points in rational iteration theory

I've been digging around the iteration of rational functions. By chance I came across a mapping $R(z)$ such that there is only one reppelling fixed point and two parabolic points. I'm still far from understading the texts in the field, e.g. Beardon's or the classical text by Milnor, but all mention that the study of a mapping with parabolic points is significantly more difficult than the case of attracting and reppelling fixed points.

Can someone give, perhaps a heuristically, explanation why this analysis is more difficult? In particular, I would like to understand if the dynamics depends explicitly on the mapping (in which case there's nothing much to do, I guess), or if it's really "difficult" in the sense of the complexity of proving theorems about the dynamics.

Examples will be much appreciated.

If $z_0$ is either a repulsive or attractive fixed point of $f$, then it turns out that $f$ is dynamically similar near $z_0$ to $g(z)=az$ near zero. In particular, there is a neighborhood of $z_0$ where all points move either away or toward $z_0$ under iteration of $f$. A similar statement can be made when $z_0$ is super-attractive, though that is treated a bit differently.

When we iterate near a parabolic point, we simply don't have that classification. There are at least two concrete properties that we lose that makes analysis more difficult:

A relatively simple example illustrating all this is given by the function $f(z) = z+z^5$. Note that zero is a parabolic fixed point for this function. If $|r|$ is small, then $|r|^5$ will be very small. Thus, points near zero barely move under application of $f$. This illustrates point 2 above.

The dynamics of $f$ are illustrated in the following picture: 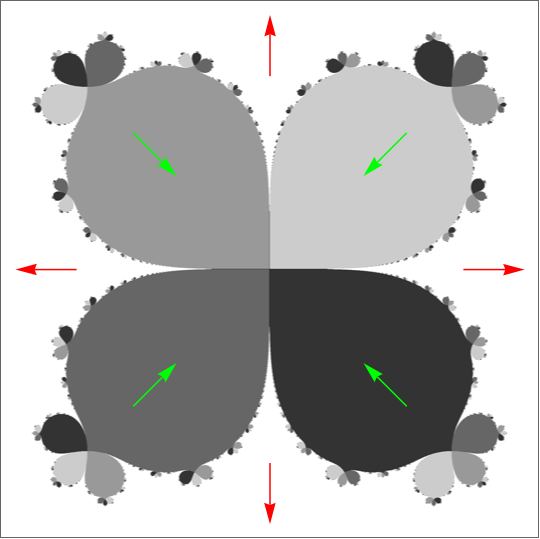 Returning to point 2, the basic escape time algorithm is not particularly good at generating images of these types of Julia sets. A solid understanding of the Leau-Fatou flower theorem, however, allows us to to classify the dynamics based on the repelling/attracting directions. We can then use a boundary scanning technique to generate the following: 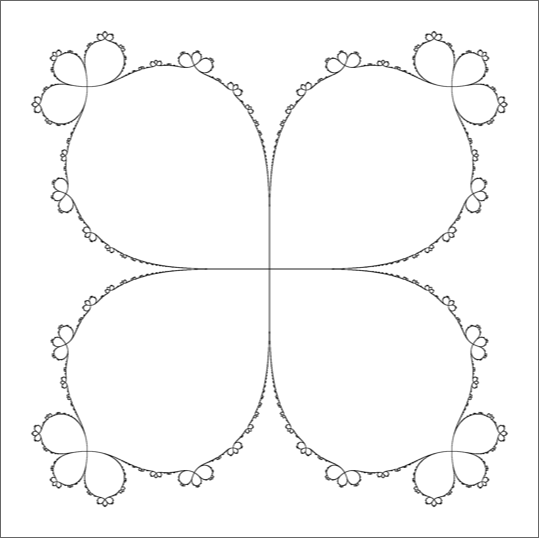 ( The answer by Mark is great)

The global dynamics is similar to other cases.

The local dynamics ( near fixed point) is more complicated then other cases because of: 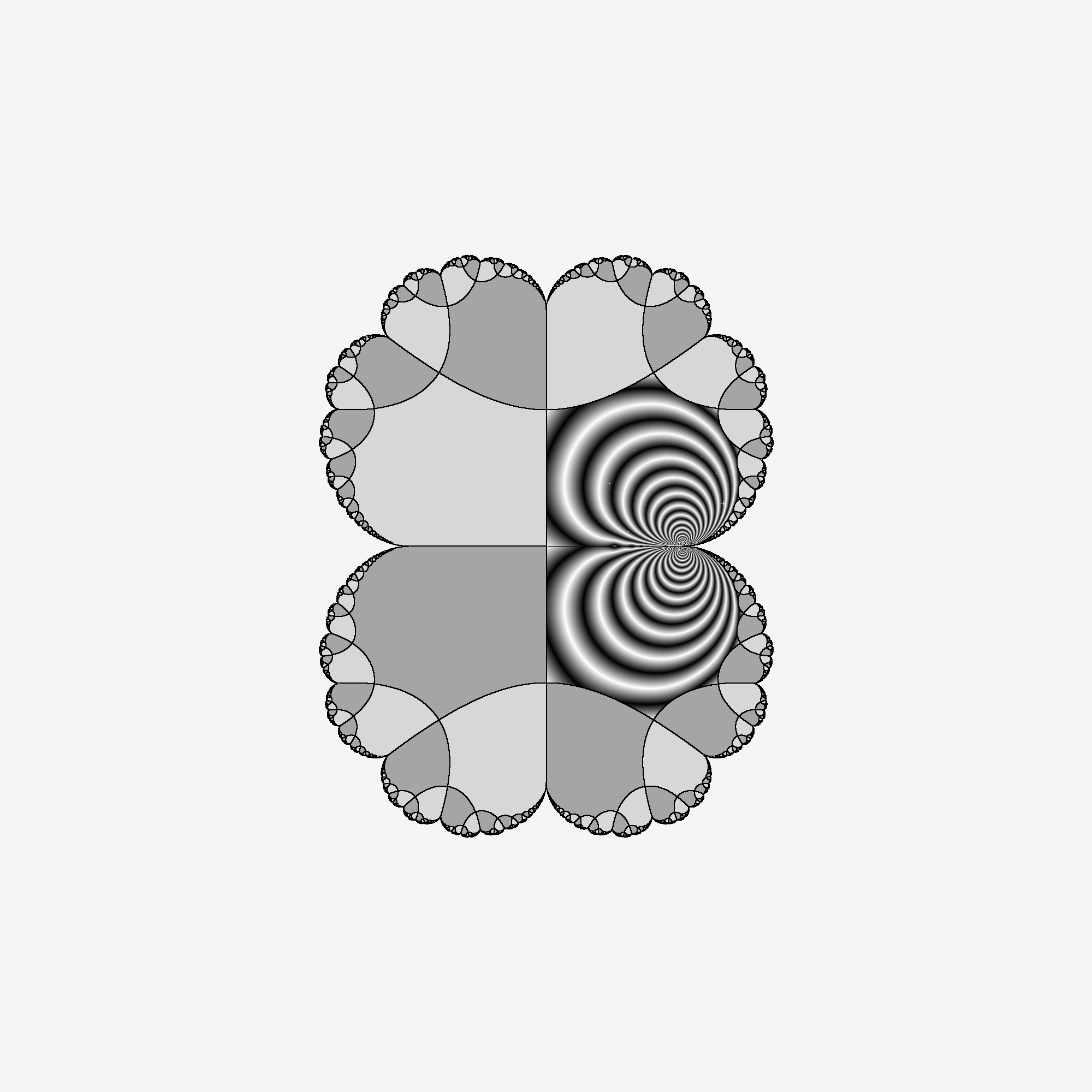 Now after 3 steps one have p simple orbits ( suborbits). Take one orbit and you can analyze it. It can be seen on the above image as the white dots. Note that all dots are on the same color of the sepal, it means that point with the same color are on the invariant curve.

Here is analysis of radial move only: 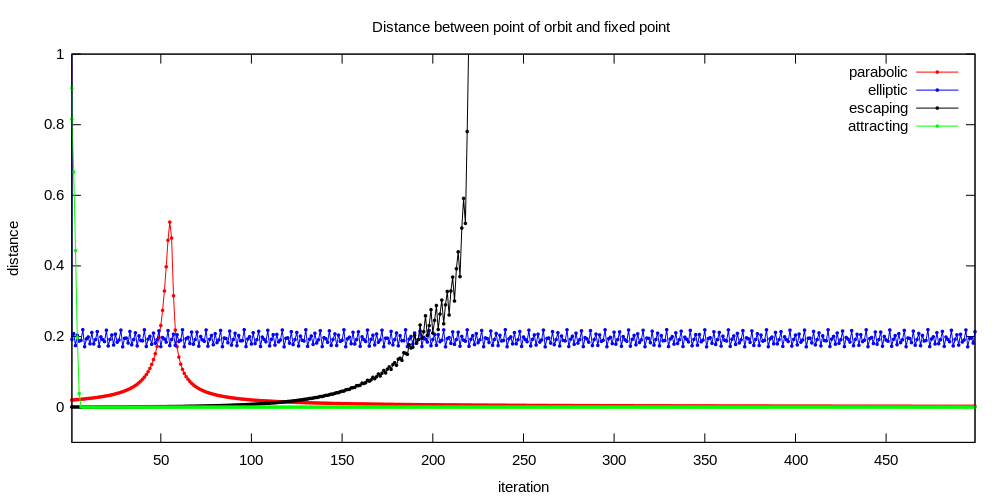 Parabolic case is red: first point go out of fixed point then goes back to the fixed point

This is analysis of (sub)orbit of point near fixed point.

There is also different approach: analyze behaviour of periodic ponts.

At the end it collapse into the fixed point.

More one can find in wikibooks: * Parabolic dynamics

Not the answer you're looking for? Browse other questions tagged complex-analysis complex-dynamics or ask your own question.

4
What is the algorithm hiding beneath the complexity in this paper?
3
Finding attractors / fixed points for the circumference of the main bulb of the Mandelbrot Set

5
two fixed points, same fractional iteration
2
The fixed points of a rational function of multiplicity 2 or more are in the Julia Set
51
Has this chaotic map been studied?
0
how many known classifications and types of indifferent fixed-points are there?
3
Dyadic rational boundary points of the Mandelbrot set
3
are parabolic points in the Mandelbrot set algebraic numbers?
1
Attracting or parabolic cycles other than fixed points