Why do I get two different results in this contour integral?

where we have chosen the contour as a semicircle of radius $R$ in the upper half-plane and taken the limit $R\rightarrow\infty$, assuming that $f$ is such that the integral over the arc vanishes at infinity. Since the only pole inside the contour is the one at $-a$, this is the only residue that contributes.

Now, instead of displacing the poles, consider deforming the contour as follows, 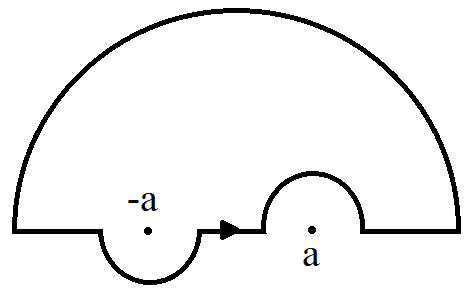 where we have used the residue theorem, and the corollary in this answer.

Why do the results differ?

Edit: My question is close to this one, but not quite the same, since I have deformed the contour in the same direction I've shifted the poles. According to the answer in that question, I should then get the same result with both methods, but I don't.

You haven't "deformed" your contour, you've simply replaced one contour by another! There's simply no reason the two integrals should be equal.

They'd be equal if the following false version of Cauchy's Theorem were true:

A correct version of CT is this:

The hypothesis there means that there is a continuous family of contours $C_t$ for $1\le t\le 2$ that connects $C_1$ to $C_2$; in other words, in the correct version of the theorem you need to be able to continuously "deform" $C_1$ to $C_2$, a little tiny bit at a time, without ever leaving $D$.

Here, in order to get from the original contour to the one in the picture, continuously, at some point one of the intermediate contours must pass through the point $z=-a$, which says the "deformation" cannot be done within the set where $f(z)/(z^2-a^2)$ is analytic. So the correct version of CT simply doesn't apply.

Not the answer you're looking for? Browse other questions tagged complex-analysis contour-integration or ask your own question.