Constructing a function based on a real-world scenario

A random thought came into my head today when I was in the subway:

I decided that I would try to use some combination of a sinusoidal function and a linear function, since the train would try to do the same thing during certain periods of time, and the train is moving only in one direction. I hopped onto Desmos and played around a little bit, and I was able to create a function that gets me somewhat close to what I want. $$d_1(t)=t-\frac1{2\pi}\sin 2\pi t$$ 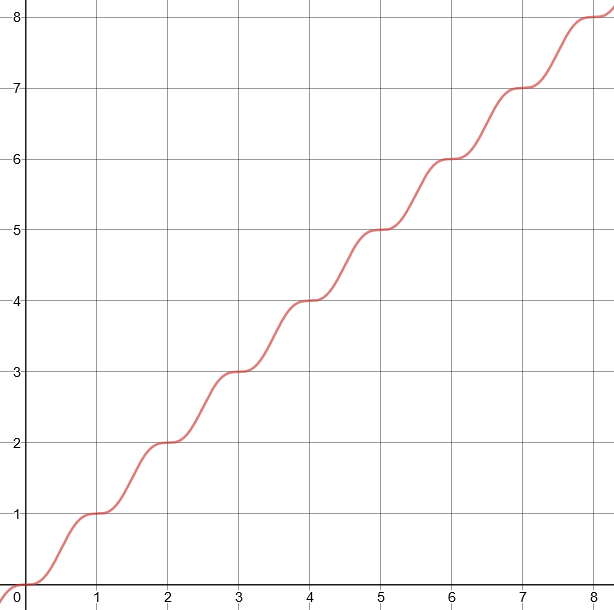 I chose the constant multiple $\frac1{2\pi}$ to simplify the distance between each station to $1$, and the multiplier $2\pi$ for $t$ to suggest that it takes $1$ unit of time to get from one station to the next. Choosing the sinusoidal function means that there will be no length of time where the train is moving at a constant speed, and the acceleration and deceleration will be exactly opposite, separated by the point of inflection halfway between the stations.

The problem: trains usually stop at every station. I want to, arbitrarily at first, modify the function so that the train waits for the same amount of time as it takes to travel from one station to another. Eventually, I want to be able to construct a function that can describe the waiting time in some proportion to the traveling time. I came up with the function $$d_2(t)=\begin{cases}t-\frac{\lfloor t\rfloor}2-\frac1{2\pi}\sin 2\pi t,& \lfloor t\rfloor \textrm{ is even}\\ \frac{\lceil t\rceil}2,& \lfloor t\rfloor \textrm{ is odd} \end{cases}$$ 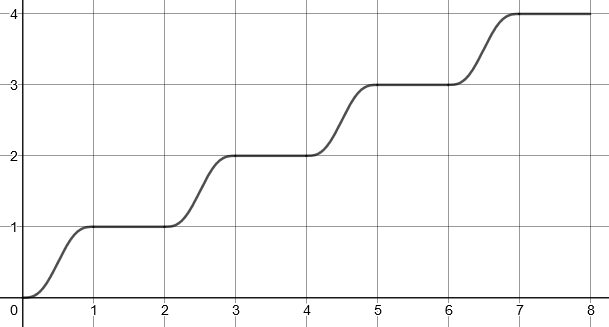 This gets me something closer to what I want.

Just collecting various comments all in one place, and filling in some holes / details.

First, a function $d(t)$ is simply a mapping from values in the domain (in your case: time) to values in the range (in your case: distance). Whether you can write that function as a "nice" formula of "well-known" expressions, is kinda irrelevant. I should add though, the confusion between (abstract) functions and (nice) formulas is historic, so if you have the same confusion, you're not alone. :)

In the context of $d(t)$ being the motion of a train, there are reasonable assumptions to be adopted, e.g. $d$ should be continuous (the train does not "teleport"), differentiable (velocity is well defined) and maybe twice differentiable (acceleration is well defined). However, even after adopting these, there is nothing special about sinusoids. (In the context of a moving pendulum, or (idealized) planetary rotation, maybe sinusoids would be natural, but a moving train...?)

Q2: As answered by @quarague it is not possible for your function to have a constant stretch and also be analytic, and "analytic" very roughly translates to something with a nice formula (and probably includes most "familiar" functions you have in mind: polynomials, sinusoids, exponentials, etc). This is actually a non-trivial result. This applies to both distance (constant distance implying stopping at a station) and velocity: If you have constant stretches and non-constant stretches (in either distance or velocity), then you will have to write your function as piecewise.

Q4: As answered by @AdamRubinson Fourier Series would be a way to go, but for the purpose of writing out the function it's probably overkill. Suppose $d^*(t)$ for $t \in [0,1]$ describes what happens to the train in the first hour, and $d^*(0)=d^*(1)$ s.t. the train makes a complete round trip. Further suppose the train does this every hour, then you can simply write the overall $d(t)$ as

Here $\lfloor t \rfloor$ is the standard notation for the "floor" function which denotes the greatest integer $\le t$, so e.g. if $t=13.7$ then $\lfloor t \rfloor = 13$ and $t - \lfloor t \rfloor = 0.7$ gives the fraction part of $t$. Note that while "floor" is a "standard" function, it is piecewise. Which in a roundabout way brings us back to the your Q2: you can always describe a piecewise function in a non-piecewise way... if you define a new name for it! :)

Hope this helps (as opposed to confuses even further!)

Not the answer you're looking for? Browse other questions tagged calculus soft-question recreational-mathematics periodic-functions or ask your own question.

0
Finding the total distanced covered (physics)
0
Can I have a net equation for distance traveled?
1
Calculus train question
8
Which part of the train stays for the longest time in the station?
1
What will be the total fare?
1
Verifying a Superior Integration Method for Step Functions
0
Calculus Subway Problem
0
Fastest possible time for Rectilinear Commuter Train
1
Determining distance between two distances given acceleration, max velocity, deceleration and total time.
0
Motion Problem with Both Acceleration and Deceleration