Given two relations on a set, I want to see if one is reflexive/transitive/symmetric, and find some relation compositions.

$ \newcommand{\CC}{\mathcal{C}} $ Observe that, if we represent your initial relations $R,S$ as a directed graph (where $x$ points to $y$ iff $(x,y) \in R$ or $S$, depending on the relation), then we have these graphs respectively: 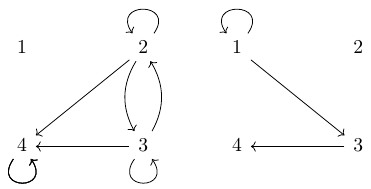 In graphs like these, certain properties can be intuitively and visually observed:

Note that the three properties above are independent of each other, to some degree. A relation can be any one of these while not the others. For instance

Also note that "$R$ is not reflexive" is not necessarily the same as "$R$ is irreflexive", and similar for symmetry and antisymmetry. A relation can be both, or neither, or one, or the other.

Personally, when possible, I like to approach this sort of problem visually. Write out the elements of the relevant set, in columns -- three for any given composition of relations, but since we're finding multiple compositions we can do this more compactly with four columns to find both compositions.

In short: the arrows in the first gap represent the first "mapping" for the relation under $R$, and those in the subsequent gaps represent that for $S$. As you might imagine, following from $\CC_1$ to $\CC_3$ gives you $S \circ R$; followings from $\CC_2$ to $\CC_4$ gives you $S \circ S$. (This in particular might be more intuitive if you read $S \circ R$ as "$S$ after $R$," for instance, and think about function composition - in a definition sense, functions are just special relations.)

Anyhow, the diagram you get for your case is this: 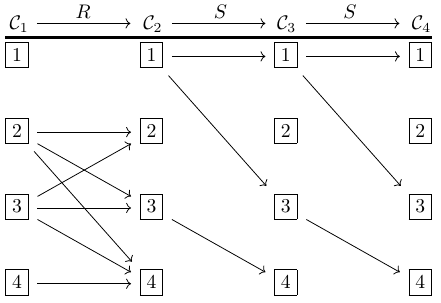 Thus, your answers in this respect are correct (once we account for your comments in Bram28's answer).

...granted, this question is quite old, so I imagine you don't need help now. But hopefully this helps someone in the future, and, if nothing else, gets this question out of the unanswered queue.

1) The element $1$ not being used in $R$ indeed makes it irreflexive. However, it does not mean that it is not symmetric or transitive. For example, the relation $Q = \{ \}$ (i.e. the empty relation) would be perfectly symmetric and transitive, even if it contains no elements at all of the set it is defined over! So, you'll need to do some more work on that one

Not the answer you're looking for? Browse other questions tagged discrete-mathematics solution-verification relations or ask your own question.