How can a "proper" function have a vertical slope? 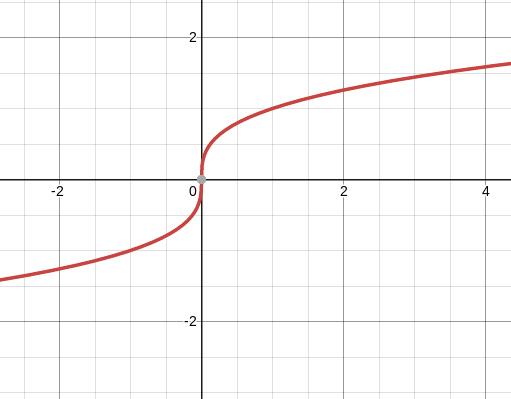 Since $f$ is a function, for any given $x$ value it maps to a single y value (and not more than one $y$ value, because that would mean it's not a function as it fails the vertical line test). This function also has a vertical tangent at $x=0$.

As I understand, in the graph I pasted we cannot take the derivative of x=0 because the slope is vertical, hence we cannot see the instantaneous rate of change of x to y as the y value is not a value (or many values, which ever way you want to look at it). How is it possible to have a perfectly vertical slope on a function? In this case I can imagine a very steep curve at 0.... but vertical?!? I can't wrap my mind around it. How can we get a vertical slope on a non vertical function?

The tangent line is simply an ideal picture of what you would expect to see if you zoom in around the point.

We can also learn several things from this geometric intuition.

No, we don't need two vertical points. By the same idea, if the graph of a function $f$ has an horizontal tangent line somewhere, then there has to be two points of the graph of $f$ with the same $y$ coordinate. However, the tangent at $0$ of $x\mapsto x^3$ (note that this is not the function that you mentioned) is horizontal, in spite of the fact that no two points of its graph have the same $y$ coordinate.

To get a vertical tangent we need 2 vertical points...

Herein lies the error in your assumptions. A tangent intersects a curve at the point of tangency in just one point.

Vertical tangent does not mean that the function is not one to one.

As others have pointed out, this is the crux of the misunderstanding. That said, I'd like to try and succinctly highlight the core issue: and that is that derivatives are not defined by the secant of two points, but rather by the limit of secants approaching a certain point.

In the OP example, letting $x = 0$, as we take other domain values $x'$ trending closer to $x$, inspecting the trend of secant slopes is the essential meaning of the derivative there. In this case, the secant slopes grow larger without bound, which is the indication of an undefined (or infinite) derivative, and hence a vertical asymptote. The definition from Wikipedia:

The Wikipedia article on vertical tangents uses the same $f(x) = x^{1/3}$ example, so hopefully that's clarifying. I suspect that this kind of misunderstanding may be the result of a particular course of study failing to emphasize the limit definition of the derivative.

The "slope" at a single point of a function is really a limit of the slopes between points (this is the definition of the derivative, by the way). As you say, a "proper" function cannot have vertical slope as measured between two different points. To resolve the paradox, it pays to remember that taking limits can often result in extra "degenerate" cases to consider that one did not start out with. For example, think of a triangle which in the limit as two vertices are brought close to one another, becomes a line segment. And in the same manner here, functions can have points where the slopes near a point grow more and more vertical - and in the limit, we obtain a vertical tangent line.

By the way, your question is similar to some of the Zeno paradoxes, whose resolution eventually led to the concept of a limit. For a more "modern" take, one can give a more abstract answer behind this principle using topology, specifically the notion of boundary in topology. Oftentimes the class of objects we start out with is "open", meaning that a small perturbation of the object remains in the class (think of the class of triangles with positive area - we can move each vertex a little bit without causing the triangle to degenerate). But when we take limits, we can travel out of our open set and into its boundary. For the problem you asked about, the open class is the set of real numbers $\mathbb R$ representing the possible slopes of secant lines, and the degenerate case belongs to the extended real line, $\mathbb R\cup \{\infty\}$. Here the topological boundary is the singleton set $\{\infty\}$, representing the limiting case of a vertical - i.e., infinite - slope.

As you observed, $\frac{dy}{dx}$ is not defined at $(x,y) = (0,0).$ And there is no straight segment anywhere on the graph where the slope could be exactly measured by taking any two distinct points on that segment.

But those are not the only ways to define the slope of a curve.

This happens usually when the point of investigation (grey dot) is a point of inflection where the concavity of graph changes plus it is also a point where the tangent is parallel to $y-$axis. Since both the events taking place at a unique point $x=0$ of the domain, so it still qualifies the criteria to be a function (vertical line test). The function $y=x^3$ also has the same property of concavity change at $x=0$ but the tangent there is parallel to $x-$axis.

Just another point here, the function is a proper function, because it never really goes vertical. But the rate of change in values (derivative) when viewed as a function is not. To make this clearer that these are two different functions, you can again take the rate of change of this second function and view it as a function, so on and so forth. You keep getting different new functions forever that aren't the original, in this case.

Alternatively you can say the exact same thing but using the language of calculus and say the function passes the vertical line test but it's derivative does not. Taking a second derivative gives the acceleration. This function is infinitely many times differentiable so lies in $C$. Also this function does not equal any of its subsequent derivative.

So you are correct that no two points are collinear and vertical. But you are fundamentally incorrect in the assumption that a tangent line must share two points. See the tangent line of a circle, it oscilesses the edge of the circle or kisses it. Though tangent lines aren't necessary and your incorrect assumption about them isn't even necessary to see what you ask.

The derivative of the function is

Alternatively, $x$ can be expressed as a function of $y$.

Not the answer you're looking for? Browse other questions tagged calculus functions derivatives graphing-functions tangent-line or ask your own question.

10
Is a function that has a vertical tangent line a function?
1
Does the definition of derivative exclude the possibility for discontinuous rate of change?
0
Proof of tangent lines to a curve
12
Can a cubic function have two tangents at a single point?
1
On A Textbook's Explanation Of Derivatives And Limits
1
How can derivatives represent tangents?
1
regarding derivatives
1
Is there an intuitive way of visualizing how a function that is flat at some given point can be something other than a constant function?
2
How can I calculate a smooth tangent wave that has no periodic delays?