Applications of this integral equation in Banach space

I’m writing a paper on fixed point theorem, as an application of my main results, I will study this equation:

Since I am new to doing research, I want to know if there is an application in physics, biology, population dynamics.. of this system - or this kind of system-.

Are there any existing textbooks/articles/papers about this kind of equation?

Any help would be very much appreciated.

But the differences are: the Lotka-Volterra (AKA predator-prey) model is an autonomous system while your model is non-autonomous (i.e. explicitly dependent on $t$). Furthermore, the origin is a fixed point (equilibrium point) of Lotka-Volterra, so the initial state cannot be $u(0)=v(0)=0$. You may also be interested in reading about Lanchester's model but that's quite similar to the LV.

Roughly speaking, I agree with prof. Israel that your equations describe some kind of population dynamics. The predator-prey is a special case of these dynamical systems. In your equation, $u$ can be regarded as the population of a species that is related to another one, $v$. And the relationship between these two can be described by the same non-autonomous function.

Addendum: I try to give a more thorough analysis of the competitive Lotka-Volterra model, since it seems to be the only one that has been suggested so far.

This system has four equilibrium points in the $(u,v)$ plane: 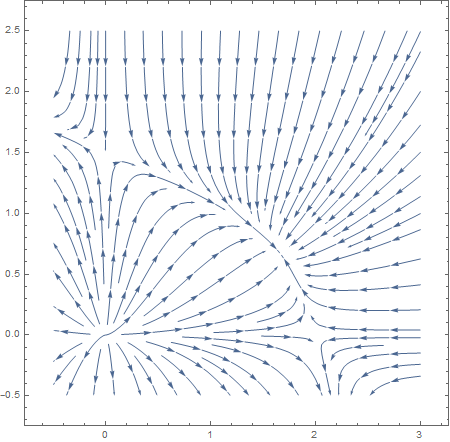 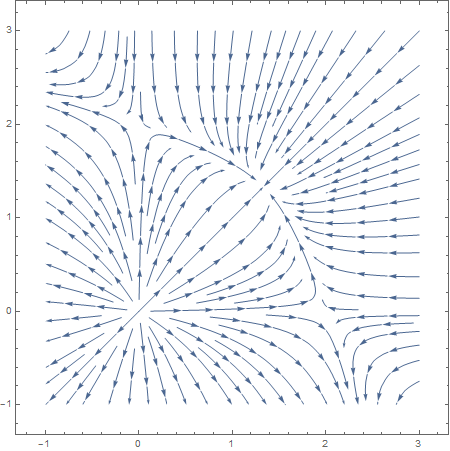 Not the answer you're looking for? Browse other questions tagged integration analysis systems-of-equations mathematical-physics or ask your own question.