Find the maximum number of triangles that can have equal area

Here is another math problem that I just can't do.

A convex pentagon is partitioned by its diagonals into $11$ regions, $1$ pentagon and $10$ triangles. What is the maximum number of those $10$ triangles that can have equal area?

I tried many different ways to do this. The standard regular pentagon has $5$ triangles with equal area. This is a reasonable answer, but many people on my forum claim to have found $6$ to $7$ triangles by Coordinate bashing. They assume the vertexes of the point to be $(0,0), (0,1), (a_1,a_2), (b_1,b_2), (c_1,c_2)$, and they hash out all of the coordinates of the diagonals, and figure out the area of each triangle.

Is there a simpler and less confusing way to solve the problem?

Any help will be greatly appreciated.

Let's label the 11 areas in the pentagon as shown in the figure. We are free to fix at will one of them (we can set, for instance, $u=1$): if four other areas are given, the remaining must be determined. So there must be six equations connecting these areas.

Five of these equations can be found, recalling that in a convex quadrilateral, divided by its diagonals into four triangles, the products of the areas of opposite triangles are the same. Every diagonal of the pentagon divides it into a quadrilateral and a triangle: applying the above rule to those quadrilaterals leads then to the following equations: $$\tag1 (c+e)(b+u)=a(g+m+d)$$ $$\tag2 (d+f)(a+u)=b(c+m+h)$$ $$\tag3 (b+d)(h+l)=f(g+m+u)$$ $$\tag4 (a+c)(g+l)=e(h+m+u)$$ $$\tag5 (e+g)(f+h)=l(c+m+d)$$ A sixth equation can be found by noting that, once we set $u=1$, fixing $a$ and $b$ amounts at giving the horizontal diagonal, then fixing $c+e$ and $d+f$ is the same as giving the two diagonals issued from the upper vertex. But then the whole pentagon is given and the values of $c$ and $d$ can be derived from the above data by two equations. One of these equations is for instance: $$\tag6 c(ab+bu+du+fu)=a^2(d+f). $$ To prove that no pentagon exists with 7 triangles of equal area, it suffices to check that the above equations give no valid (i.e. positive) solutions when 7 variables are given the same value (e.g. $1$). I did that with Mathematica to speed things up, but I think it could also be done by hand. All subsets of seven variables were tested, setting them equal to $1$ and solving for the other four variables. No valid solution was found, and this confirms that 7 triangles of equal area cannot exist. 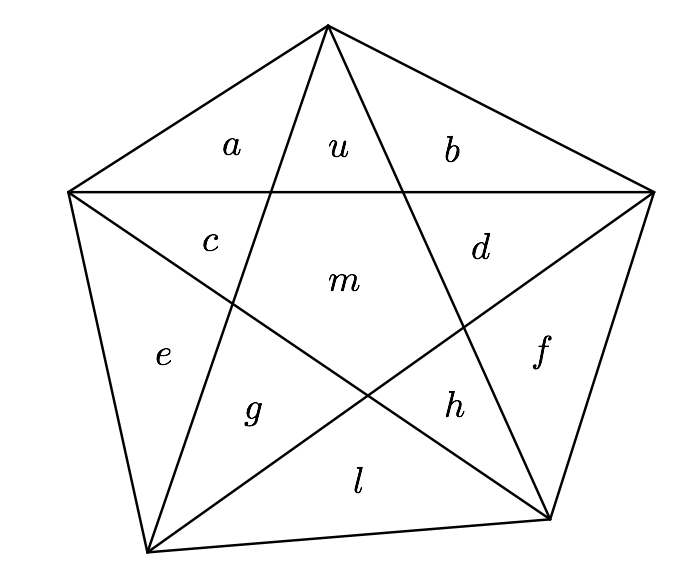 I also checked that 6 triangles of equal area are indeed possible, and found three different solutions:

The first one is equivalent to that shown by Daniel Mathias in his answer, but the other ones are different (see figure below).

After almost two years I'm asked to explain the last equation above. I don't remember how I got to it, but can show how to derive another equivalent cubic equation.

As we are only interested in ratios of areas, we can perform an affine transformation carrying triangle $u$ to a right-angled isosceles triangle with base $2$ and altitude $1$ (see figure below). Its oblique sides $AB$ and $AC$ measure then $\sqrt2$. 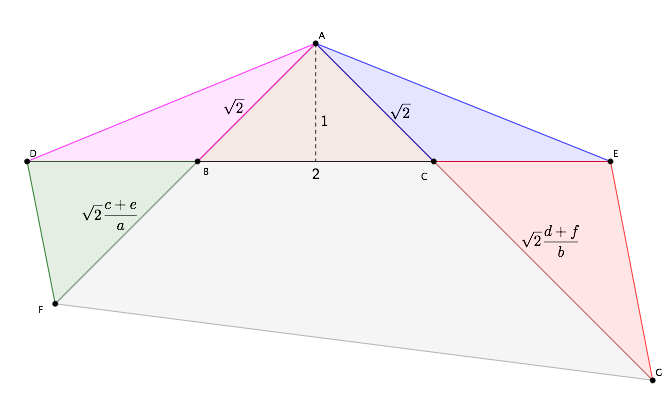 As mentioned in comments, six triangles of equal area is trivial. Such a pentagon can be constructed from any isosceles triangle. I also agree with Aretino in suggestion that a solution with seven triangles does not exist. 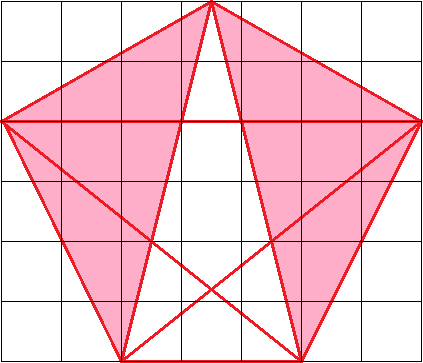 Not the answer you're looking for? Browse other questions tagged geometry euclidean-geometry polygons convex-geometry or ask your own question.

6
Regular pentagon and tangent lines
3
Prove triangle similiarity by given expression
1
Approximating the area of triangles (same base and height), using rectangles stacked differently
1
AAA similarity Theorem.
0
A problem related to triangles
3
Looking for Regular Polygons with a Side to Diagonal ratio Equaling a Metallic Mean
0
Proof for points of intersecting circles.
1
Triangles in a pentagon
0
Triangle Center Midpoint Proof