I'm attempting to solve a problem similar to trilateration but with slightly different data.

I want to find the center of a circle (in my case, its coordinate is the origin of a sound wave). Let's call the center of this circle $c$.

Imagine then I have a set of three points $p1...p3$ which are equidistant from each other, but all different distances from the origin of the sound, $c$.

Imagine a circle travelling outward from $c$ (this is the sound wave propagating). It will "hit" one of these points first - let's call this point $p_1$. This point then, by definition, intersects with the circle propagating from $c$ at this point in time.

Imagine for the sake of this explanation that this circle then stops propagating outwards, and instead, circles begin propagating from each of the remaining points $p_2$ and $p_3$ until these circles lie tangentially on the circle centered on $c$ at the moment that it intersects with $p_1$.

I'm hoping that this can be visually intuited with the graph below (The green point is $c$, the point in the bottom right is $p_1$, and the other two points whose circles lie tangentially to the circle centered on $c$ are naturally $p_1...p_2$): 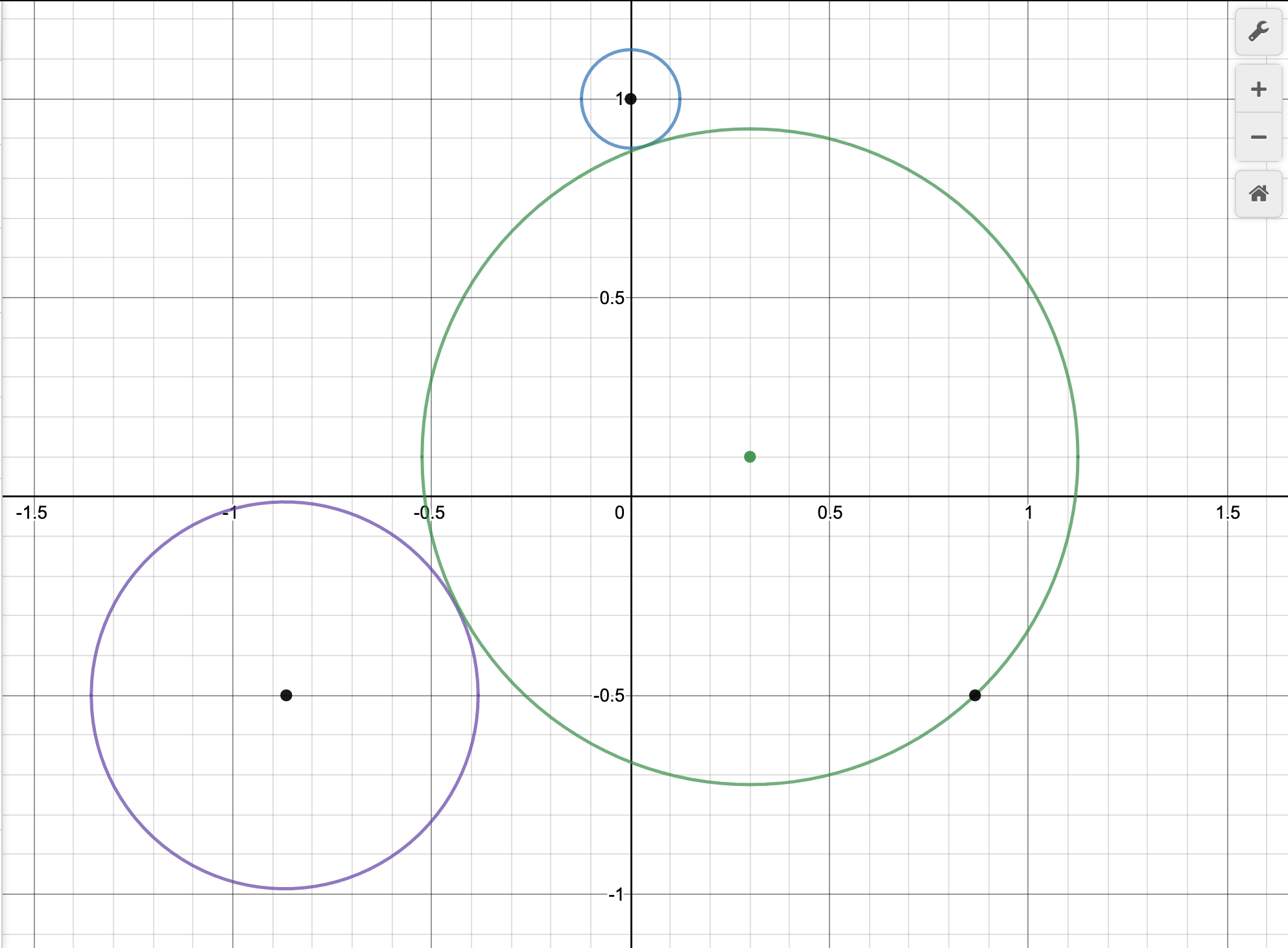 In actuality though, I only have a subset of the data depicted above known to me. That subset is:

My question: with only these known quantities, is it even possible for me to deduce the center of $c$? If so, how?

I've tried following trilateration tutorials, done a fair bit of article reading, but this seems like a weird sub-field / nuanced problem that seems to be preventing the information from applying completely.

Any help would be much appreciated. Thank you!

Your problem is exactly the “time difference of arrival” setup for trilateration: the radii of the two circles are proportional to the differences in arrival times between the first receiver and the other two. As such, it is equivalent to finding the intersection of one branch of each of a pair of hyperbolas. In general, this requires solving a quartic equation, though it can be reduced to a cubic equation with a bit of work. There is a lot of literature out there on the Web on this subject, so I’m only going to give a brief gloss here.

By squaring (*), rearranging, squaring again and simplifying, you can transform equation (*) into the form of a general conic equation, but in the process extraneous roots are introduced—the other branch of each hyperbola gets added. When you solve the resulting system of second-degree equations, you will get up to four real solutions—each fixed circle can be tangent to the unknown one either externally or internally. The correct solution to the original equations is the one that is closest to $P_0$. 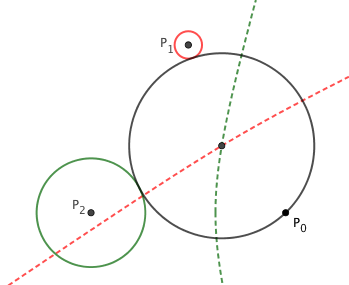 You do have enough information to find the center of the circle.

Then, the following relationships based on distances from the center $(a,b)$ to the three points can be established,

Observe that you have three unknowns and three equations, from which $(a,b)$ and $r$ can be solved.

Not the answer you're looking for? Browse other questions tagged trigonometry coordinate-systems or ask your own question.

1
How to proceed when a Gaussian Elimination gives a row of all zeroes?

3
Position of a point with fixed distance between other two points
1
What is the maximum point for which number of way to reach is given
1
Trilateration Using TDOA
0
How can I solve for the Triangle formed by the intersection of two circles?
1
Given a list of the 2D coordinates of all the Pokestops in my city, how do I find a circle with radius 'r' with the most Pokestops in it?
1
Find coordinates of third point in the straight line
0
Coordinates on plane in 3-space (and d-planes in n-space)
5
find intermediate points on small circle of a sphere
0
Circle with rotating line: Locate section on a tangent with known velocity in the section
0
Given the y-values of points sampled at a constant angle on a circle with unknown center and radius, find corresponding x-coordinates