I was reading Artin's Algebra and stumbled upon this example of a homomorphism $\phi:S_4 \to S_3$. See here and here for the example.

My question is what motivates the partition of the set into pairs of subsets of order 2. The text never bothers to explain the reason behind the move.

To my mind it's cleaner to describe these things geometrically when possible. 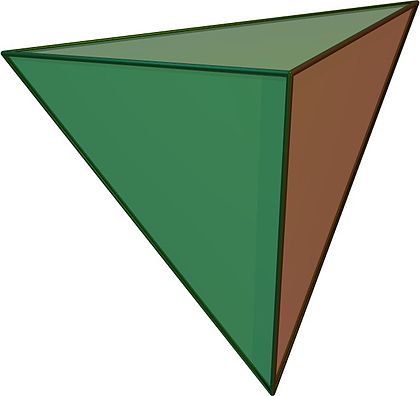 The clue is that a tetrahedron has $6$ edges: in fact the elements of $S_4$ naturally permute the set of pairs of opposite edges (all of which are visible in the above picture). This corresponds exactly to these partitions into pairs of subsets of size $2$, and hopefully everything else should be much clearer once you have this picture.

Qiaochu Yuan gave you a nice intuition but let me give you a formal answer (after all the devil is always in details).

There is a lot going on here, and it illustrates some important topics. Rather than repeat what others have said, I'll note a few things. The geometric point of view is pertinent, and groups have a key role in describing the symmetries of things. I will use $V$ for the special subgroup of order $4$.

First I would note that there is a specific phenomenon here unique to $S_4$ - it is the only symmetric group $S_n$ which has a proper normal subgroup other than $A_n$, and $A_4$ is the only alternating group which is not simple. The existence of this special subgroup $V$ is connected with the fact that a quartic equation is "solvable by radicals" - by taking square roots and cube roots and fourth roots. $V$ is the smallest group which is not cyclic. ($S_3$ is the smallest which is not abelian).

To go back to the question and how permuting the indices permutes the partitions, any subgroup of $S_4$ rearranges the underlying symbols - let's call them $a, b, c, d$ because numbers sometimes get confusing here.

The geometric point of view makes this obvious in the pairs of opposite sides of a tetrahedron.

How did this first get noticed? - Well probably many different ways by many different people. I mentioned the solution of equations by radicals because that is one of the reasons group theory got off the ground - with people studying the permutations of roots of polynomial equations.

The significance of $V$ is both that it is small and exceptional (and therefore interesting) and also that it is a first illustration of more general ideas (eg group actions, normal subgroups)

Not the answer you're looking for? Browse other questions tagged group-theory group-homomorphism or ask your own question.