Anyone encounter these Logic symbols? 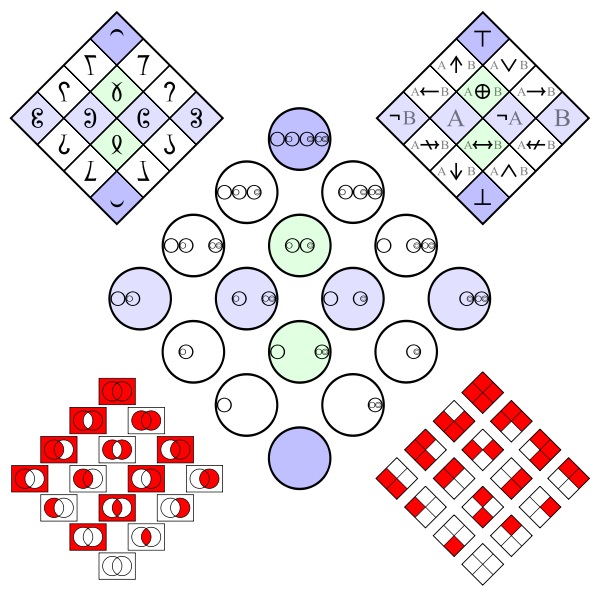 These diagrams are equivalent representations of the 2-ary boolean functions. What are the symbols used in the top left diagram?

Based on a comment by Henning Makholm and a short link trace I conducted, these are nonstandard symbols invented by Wikimedia user mate2code (formerly Lipedia).

mate2code calls them nibble shorthands, and they simply represent all possible nibbles (four digit binary strings, more commonly represented by the numbers $0$ to $15$ or by the hexadecimal digits 0 to F), in an order which can be seen here (by interpreting the red dots under each symbol as $1$'s and the white dots as $0$'s).

Note: The links may be volatile, as they refer to Wikimedia user pages.

2
Representing a logic puzzle with mathematical symbols
1
Are variables logical or non-logical symbols in a logic system?
0
Can anyone help me rationalize De Morgan's Law in terms of Venn Diagram?
0
Using separators as functional symbols in first order logic
0
Why are these the four 1-ary boolean function
0
Can these logic circuits be minimised any more?
1
What is the absolute minimal set of syntactic types necessary to set up the syntax for first-order logic?
0
Origins of conjunction and disjunction symbols ($\wedge$ and $\vee$) in formal logic