How do you determine which representation of a function to use for Newton's method?

I wanted to take the derivative, so I rearranged things to make it a bit easier, call it $~f_2(x)~$:

Newton's method iterates down the graph line, so I'd imagine that Newton's method for these two equations are not equivalent. They'd find the same solution, but they would get there different ways. In that case, is there a way to decide which equation to use for Newton's to obtain the best/quickest result?

Asking this far-from-innocent question, you are almost asking me what I have been doing during the last sixty years.

My answer is : what is the transform of $f(x)$ which makes it the most linear around the solution ? If you find it, you will save a lot of iterations.

As written, this function is very bad since it varies very fast and it is very nonlinear. Moreover, it goes through a maximum (not easy to identify) and you must start on the right of it to converge.

Now, consider the transform $$g(x)=\log\left(\sum_{i=1}^n a_i^x \right)- x\log(b)$$ It is almost a straight line ! This means that you can start from almost anywhere and converge fast.

The last point I would like to mention : even if you have a good guess $x_0$ of the solution, search for a transform $g(x)$ such that $g(x_0)\,g''(x_0) >0$ (this is Darboux theorem) in order to avoid any overshoot of the solution during the path to it.

Newton's method is very robust once you are near a root - exactly what function you chose to run it on is not of that much consequence; it will converge quickly no matter what. You might as well just use whatever is easiest.

To be more precise, let $f$ be the function we wish to find a root of and define $g(x)=x-\frac{f(x)}{f'(x)}$ to be the function performing a single step of Newton's method. First: it should be clear that things go badly if $f'$ and $f$ share a root, so let's assume they don't - and we'll assume that $f$ is smooth near the root, for convenience.

This said, Newton's method can behave pretty badly on a global scale - even for polynomials it can do really nasty things*. Choosing your function carefully isn't likely to help you much here either, since when functions have really small derivatives, the method is unstable, but when they have rapidly growing derivatives (like near an asymptote), the method converges very very slowly - basically, this isn't a good method to look for a root without having any idea of where one might be, and fine tuning $f$ won't help you there either.

(*Example: Look up "Newton's method basins of attraction" on Google - you'll get these amazing plots of where the method converges if you run it on polynomials as simple as $x^3-1$ starting at various points in the complex plane. Basically, when it's not near a root, anything can happen)

Thus you get a better (faster) result if the derivative of your function is higher at the zeros of $f(x)$.

The process becomes very chaotic if your derivative at a staritng point is close to zero.

Without knowing the zeros of $f(x)$ making a decision is not an easy task.

It is not difficult to show that there are just two real solutions, since 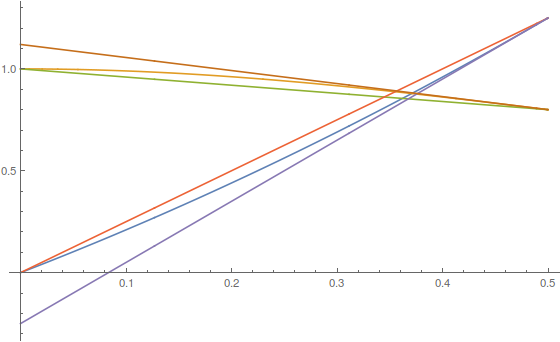 Not the answer you're looking for? Browse other questions tagged linear-algebra numerical-methods or ask your own question.

4
What numerical optimization method to use for this function?
1
Looking for numerical methods for finding roots of convex vector function ${\bf f}({\bf x})={\bf 0}$
3
Newton's method to solve implicit Runge-Kutta-method
42
Why does the Mandelbrot set appear when I use Newton's method to find the inverse of $\tan(z)$?
1
Newton-Raphson method for a vector function with root bracketing / root constraint?
2
How to use a tangent circle in a numerical method for complex-valued differential equation
3
Newtons method for finding reciprocal
1
How to make use of this iterative scheme for solving the neutron diffusion equation?
0
Solution of Vector Cross Product of Different Vectors