Please provide additional context, which ideally explains why the question is relevant to you and our community. Some forms of context include: background and motivation, relevant definitions, source, possible strategies, your current progress, why the question is interesting or important, etc.

It is well known that using different notation can significantly reduce the proof of identities or other properties. Has there been cases of using a new notation led to new insights to yet unknown identities or properties?

There are a few examples of important notational changes which come to mind. I'll put them all in separate sections, in various levels of fleshed out description. Keep in mind, notation typically comes after mathematics. Oftentimes we choose a certain notation because it fits a form we are used to, or in order to simplify a proof. With that caveat out of the way...

One fairly recent example that comes to mind is this paper ("Extending the Algebraic Manipulability of Differentials", Bartlett and Khurshudyan).

The authors argue that the notation is confusing, and misleads students into trying to perform illegal algebraic manipulations. Their solution is to reform the notation for higher derivatives into something which can be algebraically manipulated. They have a simple methodology for figuring out what the correct notion is, but it is in the paper and this answer is already quite long.

Suffice to say, using $\frac{d^2 y}{dx^2} - \frac{dy}{dx} \frac{d^2 x}{dx^2}$ allows us to algebraically manipulate second derivatives as well. (Note - they do not suggest actually using this notation, instead they suggest we use $D^2_x y$ for this. It is just useful to be able to expand it when need arises, much like foiling a polynomial).

This notation, while more cumbersome to write out, bears fruits somewhat immediately. Just as we can show $\frac{dx}{dy} = \frac{1}{\frac{dy}{dx}}$ by algebraic manipulation, we can show a similar formula for the second derivative using the new notation:

The proof is nothing but algebraic manipulation, and is in the linked paper. Indeed the authors of the paper thought that nobody had proven this before! (As with most things in basic calculus, somebody had already done it. That said the original proof was almost certainly less clear than the one in the paper.)

As a potentially controversial point, using $\tau = 2 \pi$ as the fundamental circle constant is, at its core, a notational change. The arguments are well documented, but the gist is that it makes many identities and patterns involving circles seem more natural. While this is not responsible for proving new results, it could be responsible for making the concepts seem simpler, which I think is worth mentioning.

A (negative) anecdote comes from mathematical logic, where we really dodged a bullet fired by Frege. The way we typically write formulas nowadays (using symbols like $\forall$, and $\exists$, $\land$, $\lor$, $\lnot$, $\to$, etc.) was not the first notation tried. Indeed Frege invented a notation for logical formulas called Begriffsschrift, which would have completely killed logic if it had been adopted widely. It is 2 dimensional, and here's an example of it in use:

(I grant you, this is a complicated formula, but I bet you can read it fairly quickly. Look what it becomes): 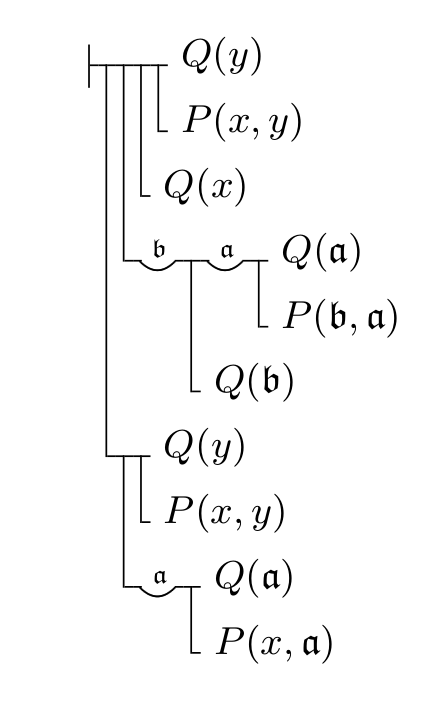 While you could make an argument saying we read the first one faster because it's what we're used to, it is objectively more compact. Imagine writing formulas at a blackboard, or deriving things with proof trees using Frege's notation. I shudder at the thought.

Back to calculus for a moment, one piece of notation that you probably don't even notice is the integral! The fact that we use the same notation to refer to antiderivatives and areas under curves from the start clues students into the fact that they are the same concept! This falls into the $\tau$ vs $\pi$ camp again, as it is primarily a didactic argument instead of a research-focused one, but students can see the connection much quicker than the inventors of calculus because our notation emphasizes it! A priori, it is extremely unclear that these two topics should have anything to do with each other, and yet students tend to grasp this quite quickly nowadays. I think that the notation is a big part of this, and while I have no direct results to cite, I'm sure this was responsible for countless results after its adoption.

Knowing only the notation, one might conjecture that some of the above results are true, and then try to prove them! Even without having seen the proof, and without me telling you, I bet you can already guess other identities that hold between these constructions. That is the power of good notation!

One last proposed change in notation is the Triangle of Power, popularized by this youtube video. The idea is to better relate three connected topics (exponentiation, radicals, and logrithms) by giving them a more related notation.

Instead of summarizing the notation here, I'll link to the original mse post, which makes a good argument for how it clarifies pre-existing theorems (as most new notation does).

Again, I'm not sure if this is exactly what you're looking for, but finding examples of genuinely "new" notation which prove genuinely new results is hard. Oftentimes we change the notation to make results we already know seem more obvious, as in the case of the integral and the triangle above. Sometimes, however, we get lucky, and our new (clearer) notation lets us prove new results related to the topic which we have clarified, as in the case of the algebraic notation for iterated derivatives. Of course, just because the result was already known doesn't mean that changing notation is worthless -- as mathematicians it is in part our job to make mathematics easier for future generations to do. Progress is not just made by geniuses seeing patterns with their amazing intuition, progress can also be made by taking the patterns we found hard to see, and making them easy to see. In this way, our students can spend less time rediscovering what we have found, and spend more time pushing into new areas of math.

I hope this was interesting ^_^

analogous to their algebraic computation counterpart rules on numbers

This analogy helps to find new identities : for example, we are fully confident that

holds because its ordinary algebraic analog is true.

Instead of the detailed development

one can group the "real" and "vector" part under the form,

underlining a close analogy with multiplication of two complex numbers (set apart the red term accounting for the non-commutativity of quaternion product). See formulas (4) and (5) in this answer.

A big thank to Mr. Gibbs, the physicist who introduced the dot product and the cross product notations around 1900.

where the only condition is that blocks $A,B,C,D$ must have compatible dimensions.

This notation helps to simplify the description of many matrix operations, and provides often deep hints.

is true under a certain condition ($C$ and $D$ have to commute).

Another example, the "augmentation" of a quadratic form :

in the way we would do it using numbers... only taking care of the respective dimensions.

Edit: an interesting transcription of a conference made by S. Wolfram here that I found referenced in a students' report.

Not the answer you're looking for? Browse other questions tagged notation soft-question or ask your own question.

2
Mathematical notation for redefined set?
7
Infinite Continued Fraction Notation
0
Formal notation for representing decimal numbers
0
Notation for matrix that is partially unknown.
7
How could we formalize the introduction of new notation?
1
Confusion regarding the cycle notation.