Prove that the triangle formed by the centers of three smaller circles, $\triangle O_1O_2O_3$, is a right triangle.

I was able to apply the Pythagorean formula to a few triangles involving the radii of the inscribed circles and proved that the ratios of the three radii are 1:2:3. Then, the centers of the three circles form a triangle with side-length ratios 3:4:5, hence, a right triangle.

On the other hand, I feel the proof may be an overkill, and evaluating the three radii explicitly may be unnecessary. There ought to be clean geometric solutions to show directly that the vertex $O_3$ is of a right angle, which I am not sure how to figure out.

This is based on the figure in the question, except that we do not assume that $O_1$ is the midpoint of one side of the quarter circle.

Following is an answer based on circle inversion w/o computing the radius of circle centered at $O_3$. 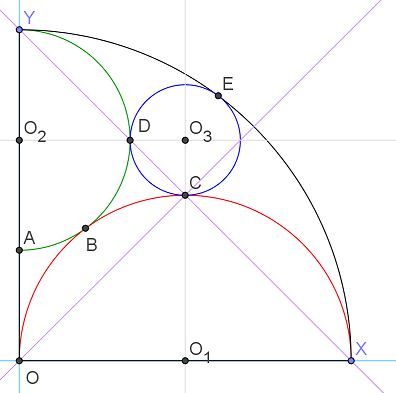 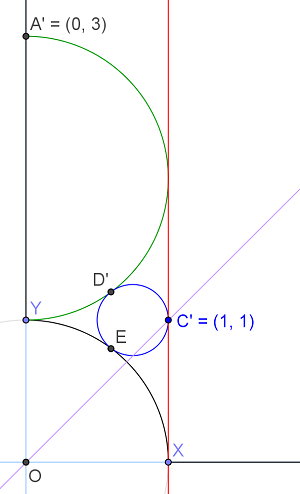 For the other angle, translate the coordinate axis so that $Y$ is the new origin. The new coordinate of $A$ is now $(0,-\frac23)$. Under circle inversion with respect to the unit circle centered at $Y$, it now looks like: 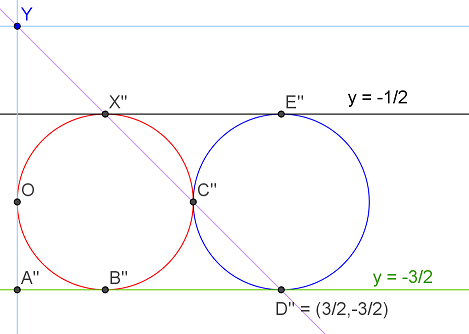 Not the answer you're looking for? Browse other questions tagged geometry euclidean-geometry analytic-geometry circles geometric-transformation or ask your own question.

1
Prove that $O$ is the center of circle inscribed in triangle $O_1,O_2,O_3$ iff circles $k_1,k_2,k_3$ have same radius
6
Three mutually-tangent circles have centers at given distances from each other; find each radius, and find the area between the circles
0
Three equal radii tangential circles in equilateral triangle. What is the ratio of the $\color{blue}{blue}$ line to the $\color{red}{red}$ line?
0
To prove orthocenter of triangle inscribed incircle of radius r lies in cocentric circle of radius 3r
2
Three circles in isosceles triangle
6
Inscribed circle in a right-angled triangle
2
A circle of radius $r$ is inscribed into a triangle.
2
An inequality $r \leq r_a+r_b+r_c$ for radii of inscribed circles in a triangle
1
Finding the area of a triangle formed by the centers of circumscribed circles of a big triangle