My understanding was that when writing out indefinite integrals, the variable we use (customarily $x$) is merely a dummy variable that can be replaced by any other letter.

However, I posted this other question and was told that I am mistaken. Am I?

My understanding was that

What (if anything) is wrong with my understanding?

There are two aspects which need to be checked and which might help to clarify the situation.

The following provides some thoughts regarding these two aspects.

Dummy variables: A synonym for a dummy variable is bound variable, where the attribute bound indicates a specific scope of the variable. At first we look at an example related to definite integrals.

Here we take as integration constant zero and have a representation of $g(x)=5x+\frac{1}{3}x^3$ via an indefinite integral.

But there is a significant difference to (1), because here the scope of the integration variable $x$ is not limited to the integral. We say the integrand $x$ is a free variable and it is the same variable $x$ as the other occurrences of the symbol $x$ in (3).

Conclusion: $x$ in $\int x^2\,dx$ is not a dummy variable, but a free variable instead.

Substitution: The statement \begin{align*} \int x^2 \,dx=\int y^2 \,dy \end{align*} is an identity, without providing any additional information is not correct, as we will shortly see.

But again, this changes when we add additional information in the context of a substitution, namely

Examples: The following examples of substituting $x$ with $2x$ in $f$ and $g$ indicate nicely the difference between the usage of a bound variable and a free variable.

You are correct in your understanding that $x$ is a dummy variable.

If you replace $x$ with $u$ in the definition above, you can see an alternate definition

Regarding your other question, the resolution is that the Stewart book was being sloppy with notation. I believe this is the part you referring to. 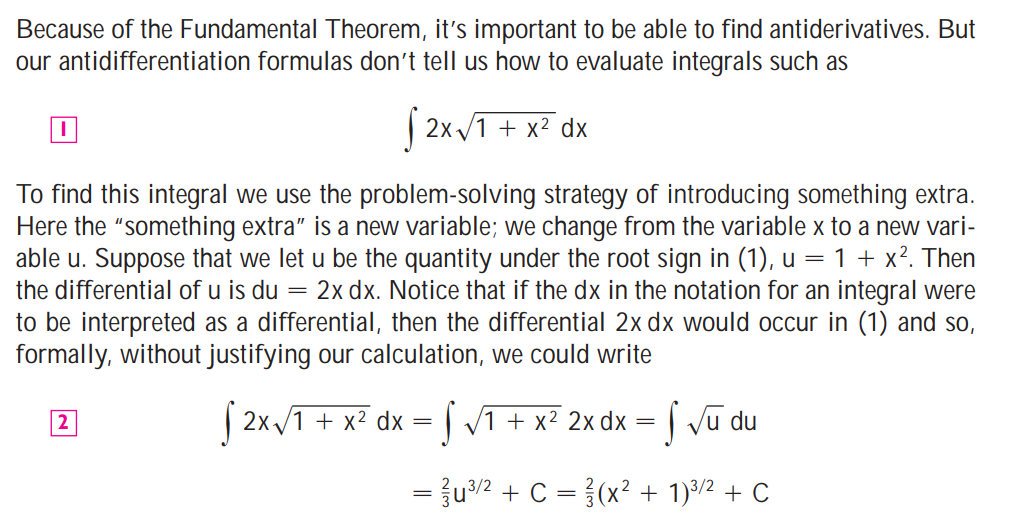 The key is the part that says

and so formally, without justifying our calculation, we could write

The textbook is employing "formal" reasoning, which generally means looking at the "form" or the pattern the symbols make, and manipulating those patterns, without trying to reason about the underlying meaning. There are no precise rules when you employ formal reasoning - you just do what feels right.

Formal reasoning is suitable for generating hypothesis which are later verified by an actual proof. An example of formal reasoning is the rewrite rule $\frac{dy}{dx}dx \rightarrow dy$, where a symbol looks like a fraction, so you treat it like one.

In the example from the textbook, you have $u = 1 + x^2$ and $du = 2x dx$. Since it feels right to substitute these symbols in the integral expression, that's what we do. And then it feels right to carry out the anti-differentiation as if $u$ was a variable, etc. So the equality signs in [2] are not to be taken literally, but are more saying "I hope this will turn out to be justified."

first of all you are not integrating variables but functions, secondly you can write $f(x) = x+1$ or $f(some\_var) = some\_var + 1$ what matters is if you have defined function $f$ sufficiently, same in integrals and so on, one thing to keep in mind that when you will perform some sort of variables transformation for equations simplifitactions you have to make sure that you apply this transformation on all occurences of substituted variables, so e.g. when you will substitute some sort of expression and you have derivative of this expression you have to compute derivative of your transformation and then substitute all occurences respectful to your transformations

1
Weird Indefinite Integral Question
2
Understanding Variable of Integration
2
Textbooks that use notation with explicit argument variable in the upper bound $\int^x$ for "indefinite integrals."
8
Correct use of the Substitution Rule (or Integration by Substitution)
5
Does the Fundamental Theorem of Calculus tell us that integration is the 'opposite' of differentiation?
6
Integration in a non-standard way: evaluating $ \int \frac 1 { x ^ 2 } \, \mathrm d x $ without applying the power rule - Is it nonsense?
3
(Disagreement among reputable users) Indefinite integral vs. Definite integral vs. Anti-derivative
16
Rigorous treatment of integration by parts in a Calculus 1 course