Why is belonging not transitive?

Observe, along the same lines, that inclusion is transitive, whereas belonging is not. Everyday examples, involving, for instance, super-organizations whose members are organizations, will readily occur to the interested reader.

Belonging seems transitive. Can someone explain?

Belonging is not transitive because we don't want it to be.

We want to be able to define a set that contains $A$ but doesn't contain $1$. For that reason, when we design the rules of set theory, we choose to design them so that belonging is not transitive.

My dog belongs to me and I belong to the American Mathematical Society... and so....

Based on your response to other answers, your question seems to be "Why do we define the belonging relation ($\in$) in a way that cares about the level of nesting of sets?", i.e. why do we say that $a \notin \{\{a\}\}$?

We could define a relation that ignores nesting, a sort of recursive belonging that works the way you seem to want belonging to work (with $a {\tt\ recursively-belongs-to\ } \{\{a\}\}$), so why don't we use that as the definition of $\in$?

Using the current (non-transitive) belonging relation means when we use sets to define composite objects, we can use the resulting things as mathematical objects with their own properties instead of having to care about the details of how they were built out of sets.

Maybe it helps if you draw sets slightly different from the usual way: 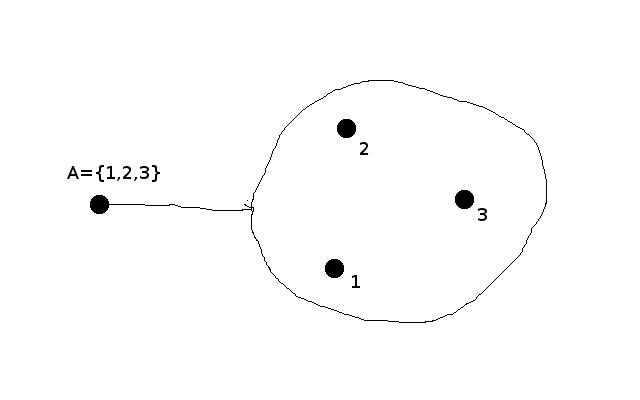 Unlike usually, the set is represented not by the loop, but by a dot connected to a loop (if we are not interested in the content of some specific set, I'll omit the loop). In the image above, we have a set $A$ (the labelled dot in the left, connected to a loop), which has three elements (the dots labelled $1$, $2$, $3$ inside the loop). 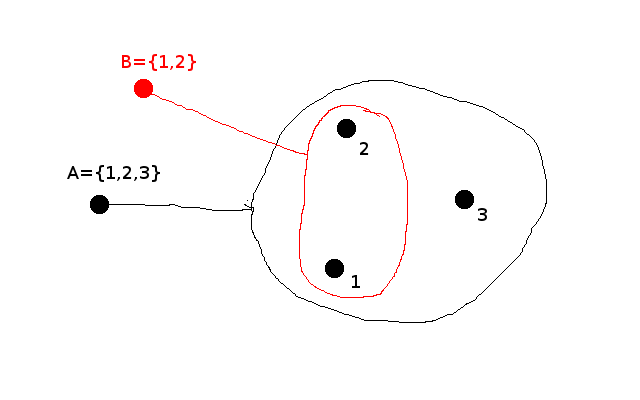 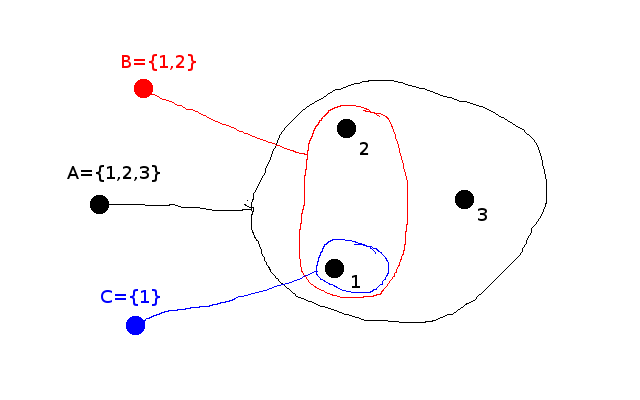 Now let's look at elements instead: 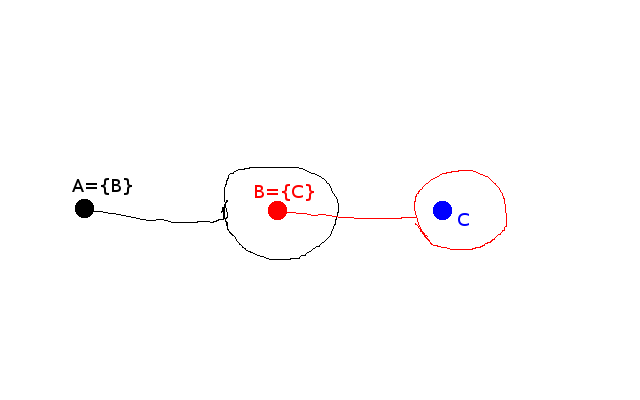 Note however that this doesn't mean that you cannot find sets where the relation is transitive, just that generally it isn't. For example, take the following set: 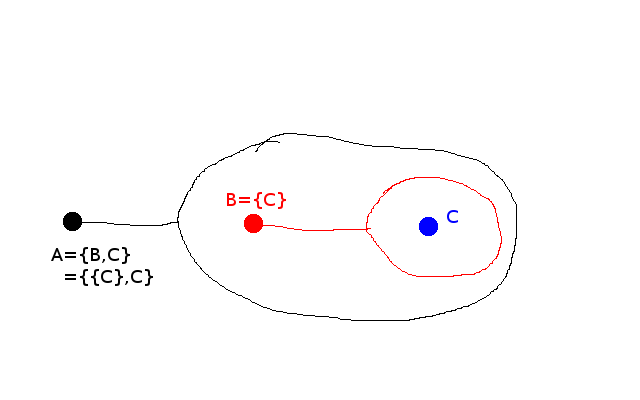 Belonging means to be an element of a set, so that $x\in A$ means that $x$ is an element of the set $A$. You can visualise $A$ as a collection of points, and $x$ is one of these points. What you are thinking of, which is correct, is that if $A\subseteq B$, and $x\in A$, then $x\in B$ too. Here, $A\subseteq B$ means $A$ is a subset of $B$, which you can visualise as $B$ being a collection of points which includes all the points of $A$ and possibly more.

However, this is different from saying that $A$ belongs to $B$ unlike perhaps the colloquial meaning of the word. If we were to write $A\in B$, or $A$ belongs to $B$, then we mean as above that $A$ is one point whereby $B$ is a collection of such points including $A$. But here, $A$ is not one point, but a sub-collection of points in $B$. This is an important difference. So although it is true that $x\in A$ and $A\subseteq B$ implies $x\in B$, it is not true that $x\in A$ and $A\in B$ implies $x\in B$, which is the requirement for transitivity.

Note: To be pedantic, it's not really rigorous to say for example that $x$ is a point, not a set; for how do you define a "point"? But hopefully the above helps you intuitively understand the difference better.

Not the answer you're looking for? Browse other questions tagged elementary-set-theory terminology relations or ask your own question.