I've been playing Kerbal Space Program again, and so I'm learning about orbital mechanics. There's a particular vector I can derive physically, but it's an intrinsically geometric object, and so I'd like to find out if there's a purely mathematical derivation of it (e g., no using conservation of energy).

Consider an ellipse, with one focus at the origin, and the other on the negative x-axis. Let $\ell$ be its semi latus rectum, and $e$ be its eccentricity.

Given a point P on the ellipse, let $\vec r$ be the vector from the origin to P. Draw the tangent ray T to the ellipse at P, and let $\theta$ be the angle it makes with $\vec r$. Lastly, erect a perpendicular to T at P, with length $\ell/\sin \theta$, and call it $\vec{q}$. 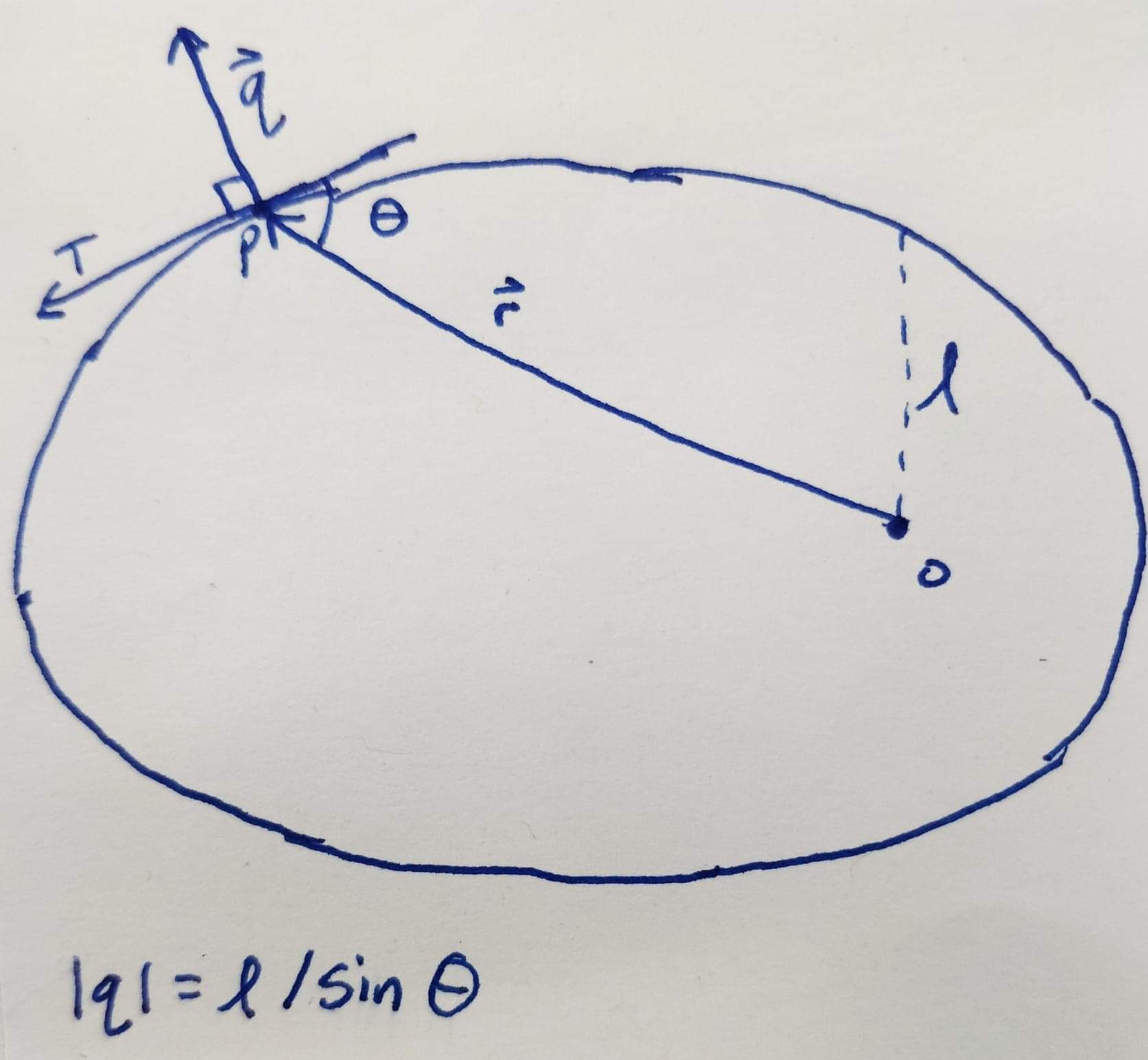 I'm having a lot of trouble with this, primarily because I don't have a good understanding of how $\theta$ varies with P. It starts at 90° at the periapsis, increases up to some unknown value $M$, goes back down to 90° at apoapsis, and then down to $180° - M$, before finally returning to 90°. $M$ gets bigger as the ellipse gets more enlongated, but that's all I know about it.

I can coordinate bash of course, but I'm hoping for something cleaner. There's gotta be some way to exploit the geometric properties of the ellipse.

Here's the physics behind why I care about this, feel free to skip if you're not interested in motivation.

From my position and velocity vectors, I'd like to determine my orbit. We know it's an ellipse, because Kepler, so there's only a few things we need to determine: size, shape, orientation.

Size is easy to find from the vis-viva equation, which itself comes from conservation of energy.

Most of orientation is also easy; the orbital plane is the plane containing our position and velocity vectors, and so it's just the plane normal to $\vec r \times \vec v$.

The remaining information we need to find is the eccentricity $e$, and how our ellipse is oriented within the orbital plane. We'll encode the latter by an angle $\nu$, the angle from periapsis to our position (astronomers call this the "true anomaly").

There's something in the literature called the "eccentricity vector", which is defined as $\vec e = \frac{\vec v \times \vec h}{\mu} - \frac{\vec r}{r}$, where $\vec h$ is the specific angular momentum $\vec r \times \vec v$. It allegedly has magnitude $e$, and makes angle $-\nu$ with our position vector (i.e., this is a positive multiple of the periapsis vector).

I don't really have much intuition around this vector. The first component points perpendicularly outward from the ellipse, and somehow the second term is exactly the "correction" you need to point along the focal axis. It's not even clear that $\vec e$ is a constant! One nice thing about it though is that it behaves cleanly when the orbit is circular; $\vec e$ will be zero, leaving $\nu$ indeterminate, which makes sense because there's no well-defined periapsis on a circle.

To show that this vector is what it promises to be, first, you show it's a constant, by taking the time derivative, and using the conservation of angular momentum. Then, consider the value at periapsis. Velocity is perpendicular to position there, so $h = rv$, and since both terms point in the right direction, the direction is correct, and the magnitude is $rv^2/\mu - 1$, which if you plug in $r_{periapsis} = (1-e)a$ and $v_{periapsis}^2 = \frac{\mu}{a} \frac{1+e}{1-e}$, will yield the eccentricity $e$.

But I feel like you should be able to do this geometrically, via the following interpretation.

Your vector $\vec q$ (blue in the figure below) is nothing but $-\vec{PN}$, where $N$ is the point where the normal at $P$ intersects the major axis.

To see why, notice first of all that those two vectors have the same direction and that the normal at $P$ is the bisector of $\angle APB$, with $\varphi=\angle APN=\pi/2-\theta$ so that $\sin\theta=\cos\varphi$. We can then apply the well-known result for the length of the bisector in a triangle, to obtain: $$\displaystyle PN={b\over a}\sqrt{r(2a-r)}.$$ 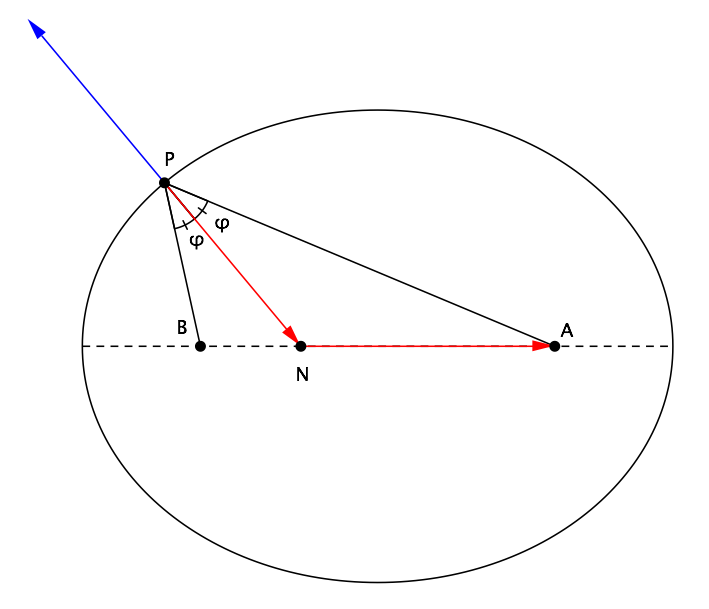 1
Finding the Velocity of a Particle after an Impact
1
What kinds of motion obeys a higher order form of angular motion?
1
Finding the initial velocity vector to launch a projectile from one location to another? (Calculus-based classical mechanics)
1
How to project the position vector of an ellipse onto a plane?
1
Fixing an orbit in space using r and v (Keplerian orbits)
2
Finding Eccentricity of ellipse from its angle with the circle
7
What are some other ways in which a parabola is "between an ellipse and a hyperbola"?