Given a state transition matrix for Markov Chain, how to get the distribution of state over time?

Suppose that we have a Markov chain with two states: UP or DOWN. Its state transition matrix as the following:

Consider probability $S(n)$, which denotes the number of times that the chain is in state UP in the first n steps.

S(99) will be the probability that 99 steps, the chain is in UP state,

S(1) will be the probability that only 1 step, the chain is in UP state

Based on your question, it is very possible that you misunderstand things about Markov chains as well as the difference between random variables and their probabilities. Thus it is difficult for me to know what you are actually looking for as an answer. For general discrete Markov chains the distribution of the number of visits to a given state in the first $n$ transitions $S(n)$ is highly difficult to compute and would have a disgusting formula. However it turns out, for this simple example, there is a nice(ish) closed form for the distribution of $S(n)$.

For example, if we have the sequence $X_0BBAAB$ we have the groupings $X_0BB$ and $AB$ with one $A$ remaining. 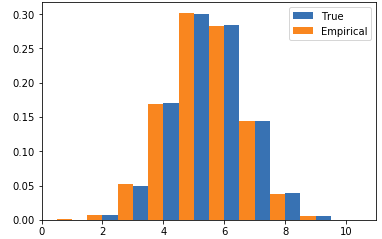 For more general discrete time Markov chains you can probably see that these calculations become intractable. However for large $n$ (under suitable assumptions on the Markov chain) the distribution of $S(n)$ will become approximately normal. The things that you could then consider would be the expected number of visits and the variance of the number of visits.